At this point, 90 percent of the movie's dialogue has been nothing but computer jargon, spat out in a stuttering, non-sequitur fashion by the characters. Take, for instance, this line, when Bug goes to investigate the "mainframe" (AKA a big closet with a bunch of strobe lights in it):

The jargon is even more annoying because most of the movie's shots at this point are behind-the-back looks of somebody doing something on a computer. Hardcore himself is looking at a computer himself when he is attacked by the Evil Motion Capture Suit of Unlimited Despair. 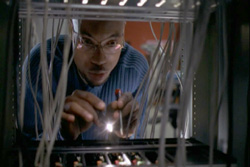 "I'm looking for the weak sperm that created me. I'm gonna kill it with this flashlight."

Since I feel this review is really lacking in bulleted lists, let me summarize the plot for you up to now:

It turns out that the suit is assimilating its victims, and that Sol's head has now found its way onto the capture suit, with two of those little silver stress balls grafted into his eyes. I could crack a joke about him looking like some sort of gay robot bug, but I won't. Calling anything involved with this movie a "gay robot bug" would undoubtedly be too complimentary.

Hardcore battles the monster with a variety of weapons but ultimately meets his death at the hands of faggotron. After the robot cuts his head of it assimilates his body, then runs around swiping various things to build itself into something that looks like the monster in the video game.

The survivors are, of course, distraught. They watched the murder through the building's "advanced security cameras" (which we're told were installed to keep spies out), and the power overload has caused all the doors and windows to seal shut.

Here is a quiz for all you readers: You've got a movie, right? It sucks but at least with all the old weapons laying around you could have some pretty cool death scenes. You want to kill two characters off, maybe three if budget permits. What would you do?

Unfortunately, if you picked any of these three you probably should consider not making movies. Especially if you picked option three. In that case, you're probably George Huang and you need to go back to your native country, where (with any luck) some sort of anti-shitty movie legislation will force you to staple your dick shut to make sure your kids don't make a movie like "How to Make a Monster."

Shortly after Hardcore's untimely demise Bug finds himself in the clutches of the motion capture suit. In a touching scene that involves him blubbering and crying for like twenty minutes, he is thrown through a wall, where his undersized body and shit-covered face destroy and oven. Since the monster is approaching and the oven's gas line has been ruptured for a good, oh, twenty seconds (which is plenty enough time to fill a room with gas, I'm sure), Bug makes the ultimate sacrifice: His life for Laura and Peter's. He sparks a lighter and the room blows up. "Game over" flashes across a computer screen and the move ends.

Or maybe it doesn’t! In the two-hour string of clichés known as "How to Make a Monster," nothing's too hackneyed to try out, especially the old fake ending bit! Laura and Peter approach the charred remains and Bug and the evil motion capture suit. Peter tells her that all along he had a backup disk of the game, which would have allowed the programmers to "reverse compile" the game, and thus shut the monster down. Laura, who has somehow acquired a gun, shoots Peter in the knee and walks off. Faggotron comes back to life and kills him. 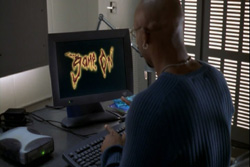 What game? The game of love, baby.

There comes a point in every movie where you really think it can't get any worse. Take, for instance, the "Ice Gun" scene in Evil Cult. Most people have consciences. As stupid as they are, even they can realize what they've created is detrimental to society on the whole, and they destroy it.

Well, ladies and gents, as I've said before, George Huang is not a human being. He is an evil Chinese robot hell bent on doing two things: Long-term cuddle sessions with fat women and creating awful endings to terrible movies.

With all of her colleagues dead, Laura is in quite a pickle. Not only is she as smart as a box of cereal, she has no way to kill the monster – unless, of course, she slaps on a virtual reality suit and battles with the monster in "the virtual realm"! And she does just that, putting on a gigantic visor and gloves, then fighting her way up to the boss of "Evilution."

The last part of the movie is shown almost entirely in CGI. Laura, in her virtual world, weaves around like Ted Kennedy's car on an overpass and fights the in-game monster down to an empty bar of health. Game over again, right? Hell no! George Huang had even more money to blow, so he figured he might as well have Laura destroy a gigantic, expensive, fish tank, which spills water all over the suit. Having finally been electrocuted to death (the only way to kill anything mechanical in a monster movie), the monster dies.

After a few more minutes of film, which include Laura as an evil CEO of the company (we know she's evil because she frowns a lot and wears black eyeshadow), finally the film ends. For good this time.

But thankfully, all is well. Apparently George Huang, after making this film, went on to actual software and joined the fine group of people at StarForce. I can only hope that, one day, his work in the world of technology will net him what his characters got: namely a gigantic ugly ball of tinfoil choking him and cutting his head off. Then having sex with his severed head in front of his children. Then maybe hollowing out the head and using it as a waste receptacle for a while. Maybe they could film it and make a movie out of it. God knows it would be better than "How to Make a Monster."