One Strike and You're Out! 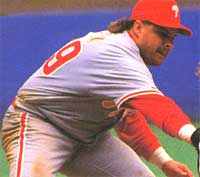 John Kruk is one of the most highly respected members of his trailer park.

Normally we cretins here in the majestic Something Awful Compound located at the top of Mount Doom and surrounded by a legion of "Small Wonder" cloned automatons, tend to stay away from writing about sports or sports-related activities because the closest we ever got to an actual physical workout was the time we had to dissect a cadaver in medical school which looked remarkably like Otis Nixon. However, we feel that the recent events shaking the world of baseball like John Kruk in a Sizzler buffet demand our collective attention. I know it at least demands your attention; besides, you have nothing better to do. Baseball, one of America's favorite pastimes next to drinking beer and laughing at fart jokes, seems to once again be in peril as players and owners are threatening to make each other look stupid by endlessly whining in the public spotlight.

Players' union delays setting strike date - The players' union had been expected to schedule a walkout that could have wiped out the rest of the season -- including the playoffs and World Series. But Atlanta pitcher Tom Glavine, a senior member of the union's board, said after a 3 1/2-hour meeting that players were prepared to give the negotiating process "every chance to succeed. We feel like there's a window of opportunity to get something done in the next several days and we're willing to explore that," he said.

See? Do you realize the magnitude of this man's bravado? The entire baseball league and probably the entire universe were saved by a few selfless men like Tom Glavine, people whose motivations were not at all influenced by the $150 billion they get paid each year, but out of the kindness of their loving hearts. The World Series will unfortunately now occur thanks to these heroic individuals! Now I don't know about you, but when I first heard of a possible strike in Major League Baseball, my heart immediately clenched up into a knot while a chill ran down my spine; if Major League Baseball were to go on strike and the World Series was canceled, that would mean I'd have to cross off yet another television program I plan on absolutely never viewing!

According to the aforementioned CNNSI article, which featured neither colorful pictographs or a series of bar graphs that use every primary color, there are 10 sticking points that players and owners are bickering about. Much like Moses, the Major League Baseball Association presented team owners with a set of 10 commandments, many of which involve patting the third baseman's ass and then scratching themselves. However, unlike Moses, these commandments were about baseball while Moses' commandments were about Noah's Ark or a secret mummy burial ground or something. Nobody gives a shit about Noah and his overrated Ark anymore, unlike baseball which at least two people care for (possibly more, I didn't bother counting all of them in the Target). Here, in no particular order, are the reasons behind this whole goofy labor dispute matching the fat rich baseball team owners against the fat rich baseball team players:

Baseball was much more simple in the 80's. For example, disputes were often settled by throwing a large white grapefruit over a white square and then listening to the white noise sound effect which played afterwards.

Revenue Sharing: Owners of small shitty teams that most people think ceased playing in the mid-70's are demanding that the wealthy, upper echelon class of "New York Yankees"-type teams, such as the New York Yankees, share their wealth. This is kind of the philosophy behind socialism except I don't think Karl Marx would be too willing to promote this particular form of ideology, mainly because he's dead. In theory, the really, really wealthy teams would give a certain percentage of their money to the really, really shitty teams. Hopefully after 12 years or so, the entire league will be composed of mediocre teams that can't bat their way out of a Funhouse Pizza bathroom stall.

The Luxury Tax: The owners would like to tax teams who pay 17-year old Mexican immigrants an outrageous amount of money each year to spit and throw a ball in some particular direction. There would be a certain cutoff point, roughly in the mid $15 billion range, where teams would be required to pay out a certain percentage of that additional amount directly to the commissioner's office. The commissioner, who is a close friend of Batman, would then take that money and give some of it to the shitty teams who would use it to purchase stolen pocket knives and compasses for when their bus eventually breaks down and they have to hike to the next city.

Contraction: This revolutionary plan would take the bottom two or three teams and turn them into zero teams. Contraction is a great idea because Bud Selig owns the Brewers and his best friend, David Glass, owns the Royals. If you add the number of games each of these teams has won this year, you'd get the number of games the New York Yankees won in a single game. Selig and Glass both realized they were morons for investing in these penny-ante teams, and now the only way to earn their money back is by having their teams contracted and being bought out by the Major League Baseball League. This is the kind of idea Cobra Commander would come up with, only it doesn't involve kidnapping a prominent scientist and forcing him to create sweaters that attack you when you try to wear them.

Drug Testing: Many professional sports people often use "performance enhancing tools" such as steroids, gin, and handguns. This isn't acceptable anymore, and many media outlets are catching wind of the fact that 28 people are expected to hit over 90 home runs each this year. The owners don't want the players to use steroids because it undermines the whole essence of baseball (whatever the hell that is), but the players refuse to subject themselves to drug testing because all the steroids in their system causes them to spray out steaming urine so powerful that the sample cup is instantly vaporized during the test.

Changes In Arbitration: I didn't bother reading about whatever this is supposed to be. I think "arbitration" means something about trees or killing your fetus with bees.

Fighting Penalties: While many players enjoy the chance to hit each other in the face with their fists, the owners are afraid all this fighting might "turn off" fans who watch baseball games while listening to Pachelbel's Canon and feeding tea and crumpets to the Queen of Nova Scotia. In addition, sudden outbursts of fighting may wake up sleeping fans, causing them to leap out of their seat in surprise and possibly fall off the upper deck which would result in a horrendous lawsuit and, even worse, an appearance on "Larry King Live."

A Minimum Payroll: Cheapskates and failing club owners are demanding a minimum payroll amount, one which will ensure they are able to rent enough players to at least fill most of the outfield during weekdays. The players think that the free market should determine the minimum payroll for the teams. Well, at least the good players believe that. The crappy players' opinions obviously don't matter because if they strike out a couple more times they'll be sent back to AA, both the league and the treatment center.

A Worldwide Draft: Everybody thinks this is simply a marvelous idea, especially the kids in Nigeria who spend all day swatting away mosquitoes the size of watermelons with their "big wood stick." If they get drafted to the major leagues, Nike will pay them $2 million to wear their shoes. If not, Nike will hire them for $.02 a day to manufacture their shoes. 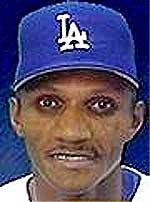 Ex-pro baseball star Otis Nixon says, "save baseball and negotiate for the sake of the fans! Also, somebody blew up my face!"

The Competitive Balance Draft: If you have the shittiest record in the major league one year, you will be allowed to steal minor league players from the best teams next year. I can just imagine the raw joy these minor leaguers will experience when they learn of this news:

COACH: "Well Javier, you're hitting .365 with 38 home runs and 87 stolen bases, I'm positively sure New York will call you up at the beginning of next year and you'll get at least $10 million minimum!"
JAVIER: "(something in Spanish)"
COACH: "What was that, Javier?" (phone rings) "Hold on, let me get the phone."
JAVIER: "(something else in Spanish)"
COACH: "Pack your bags, you're going to Detroit."
JAVIER: "FUCK!"

The "Information Bank": I didn't really read about this thing either, but I'm fairly sure that it doesn't match my mental picture of a giant floating metal cube that constantly spews out tickertape readouts and produces random beeping noises for no readily apparent reason. Perhaps it's like a sperm bank except batboys sneak in and say, "heeeey, I'll give you the heads up about that pain in Randy Johnson's shoulder if you give me twenty bucks, ehhhhh." Then their information is inserted into the Information Bank and viola, you have baseball.

As you can tell from that collection of garbage I just wrote, the rift between players and owners is growing increasingly large, threatening to suck in the entire Major League Baseball Association and possibly even bigger objects such as the XBox (lol, it's huge, lol). What can you, the average Joe Shrub, do to help out this sticky situation? Hell, I don't know and frankly I don't care. I've been traumatized ever since Otis Nixon retired from baseball in 1999 and I accidently saw a closeup picture of his face on a 52-inch television.

Goldie Hawn Has Nothing On Us!

Unless you're retarded or on heavy drugs, you'll know that today is Tuesday! And Tuesday means it's time for everybody's fourth favorite column on the site, the Comeday Goldmine! That's right, sit tight kiddies, because it's time for this weeks fast paced episode.

That's right, you know it's time to click that link. Or perhaps this one? Anyway, check it out!