It's late at night, and Joey is playing Super Nintendo. Sam tells him to feed the dog, which he grudgingly does. It's ten at the earliest, and no one has fed the dog yet. If I ever tried that with my dog, she'd chew off her leg and club me with it. Then, while I was unconscious, she'd eat me. The dog starts barking, and Joey actually tells him that he'll wake up the neighbors. It's so late that the dog's barking will wake up the neighbors, and yet, when Joey feeds him, he calls the dog a "pig" for eating quickly. This has no bearing on the plot, but it really pissed me off. A little later, Joey is in bed, and Mr. Ice Cream Man drives by his house, waving. 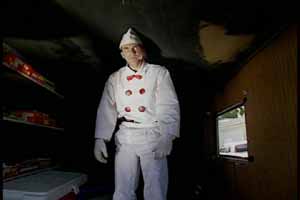 I am terrified by this image, because I am a moron.

The next day, as Joey, Emily, and Roland walk home from school, Joey tells them that the ice cream man waved at him, and neither of his friends give a damn. However, when he tells them that he's having a slumber party for his birthday, and that there will be an ice cream man there, Roland nearly pees his pants. After making several comments that just prove he's a fat, stupid, little boy, Roland goes home. This time, he goes into the house directly next door to Joey's, but on the right. You may recall that he lived way down the street on the left in an earlier scene.

This marks the point where the movie starts collapsing under the weight of its own idiocy like a brainless neutron star. Joey goes into his house, leaving Emily to walk alone. She skips along, humming and laughing at nothing (that's her character, remember?) for far too long, until she stumbles upon the ice cream truck parked near her house, at the end of an alley. Emily and Mr. Ice Cream Man have a long, drawn out conversation which further proves Mack Hail cannot act, write, or direct at all. Luckily, Emily can act far better than Detective Jeff, so her end of the conversation only falls flat because of the inane dialogue she was given. Mr. Ice Cream Man tries to coax her to come into his van to receive a special surprise. There's not a policeman on Earth who wouldn't suspect this man of planning to rape Emily if he heard these lines. At the last minute, Emily's mother calls to her from offscreen, and Emily scampers away. Mr. Ice Cream Man makes some pointless remark along the lines of "I had a mother, too, once." I assume she killed herself when her son grew up to be Mack Hail. Mr. Ice Cream Man then hums every last damn note of "Pop Goes the Weasel," and then he stands up. You know, he stands up evilly. Yeah, I hate him too.

At the supermarket, Sam is browsing the dogfood aisle, when Detective Jeff comes around the corner. Jeff is intrigued by the huge animal attached to her skull, which has somehow increased in mass, so he sidles up closer and starts suavely inspecting a can of dogfood. I thought that no dialogue could possibly be worse than the exchange between Jeff and Mr. Ice Cream Man. Once again, "Mr. Ice Cream Man" surprised me with the single worst conversation ever written. WARNING: what follows is a brief, but accurate description of the worst pick-up attempt in known history. Even reading about it will make you less attractive to the opposite sex.

First, Sam makes the horrendous mistake of asking Jeff what kind of dog he has, causing him to drop the can of dog food. He then lies and says he has a dog like the one on the can. After a few moments of awkward silence, he admits to his lie and says he doesn't have a dog, but he wants one. In between the shots, the cans mysteriously turn on their own. Sam just smiles, so Jeff picks up the dog food can again, and starts studying the nutritional information on the back like he's reading the Holy Scripture. Even though he admitted he doesn't have a dog! Well, he's not going to be thwarted by a silly little thing like his own incompetence, so Jeff looks through the items in Sam's shopping cart and asks if it's someone's birthday. Sam tells him the groceries are for her brother's party, to which Jeff responds that he is having a party of his own. He then proceeds to slowly list every item in his basket. The ladies swoon for those pathetic, boring types. Sam looks like she's going to beat him to death with a can of Alpo, but he keeps on going. Eventually, he screws up the courage to ask her out thusly: "You know, I was wondering if, um, if you'd like to go out sometime. You know, like on a date?" Sam agrees for some reason. Jeff gets her number and basically sputters for the next few minutes. I'll spare you the details of the rest of the conversation. Suffice it to say, he is unable to end it, so he actually says, "'Kay bye," and leaves. This is the man who is protecting our children, ladies and gentlemen. I have never suffered through anything as unbearably painful as this conversation. Jeff displays all the charm of a thirteen year old with severe learning disabilities. Even Mack Hail is ashamed of this scene, so he apologizes by starting the next one with a shot of two pairs of bouncing breasts. 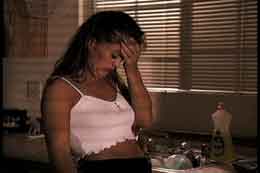 Lisa holds her forehead as her face melts.

Nikki and Lisa, played by two porn stars who are trying to break into legitimate acting, are jogging along when they spot Mr. Ice Cream Man washing his truck. Nikki decides to make fun of him, taunting him viciously until he snaps and, in a murderous rage, tells her she can't have any soda. The man is a monster. That night (at least, I think it's that night), Nikki comes home and notices that the back door is open. She closes it and get's ready for bed without ever turning on a single light. Included in her bedtime preparations is the single most unnecessary breast shot I have ever seen. I love breasts and all, but from a cinematography perspective, there is no conceivable reason for that breast to shown.

Anyway, she gets into bed, and Mr. Ice Cream Man pops up out of nowhere with an icepick in his hands. The camera cuts away from the actual killing, but at least we finally have some sort of crime in the movie. Lisa comes home for a moment, drunk as a skunk. She can't act at all, but we know she's drunk, because she's singing "Forty-four bottles of beer on the wall." That means she must have drank fifty-five bottles of beer! She also does not turn on any lights, but she does step on a squeaky clown doll. While she stumbles around, the doll squeaks again. Lisa realizes it, but doesn't do anything about it. She leaves again. There is a short clip of the ice cream truck leaving in the morning. Lisa returns home, obviously hung over, because she puts her hand over her forehead. She accidentally smears some blood on he wall which is miraculously still wet. She finally notices Nikki's corpse and screams, as we get a glimpse of Nikki's body with some red food coloring on it that lasts for just enough time for your brain to realize that the picture has changed. When you slow it down, you can see that she is holding the clown doll. Mr. Ice Cream Man must have stayed long enough to actually pick up the doll that Lisa stepped on and arrange it in Nikki's arms.

Detective Jeff pulls up outside Lisa's house in his new '82 Ford Explorer. There is police tape attached to just about everything at random, and a strange guy standing on the front lawn. This new man is the single best developed character in the movie. He wears sunglasses, he has a coonskin cap, he carries a cane, and he eats a banana. That's four dimensions right there! Four! I thought the sunglasses and cane meant he was blind, but it seems he just has a limp and likes wearing hideous sunglasses. The coonskin cap and the banana are beyond me. It turns out that this man, Gale, is a Lieutenant on the police force. He is also the only police officer who could possibly make Detective Jeff look good by comparison. Gale and Jeff talk for a while, during which time Gale declares the crime unsolveable, even though the ice cream truck which was mysteriously in the driveway all night left in broad daylight. Jeff checks out the crime scene, but doesn't take any notes. In accordance with proper police procedure, the entire crime scene has been changed before the detective arrived. The body is in a bodybag, the doll is beside it, and the policemen somehow managed to put a splash of blood on the paper. There is a message written in blood on the bathroom mirror, "Aren't you glad you didn't turn on the lights?" I nominate this for the worst crime scene in any movie ever.