Never Too Young to Die 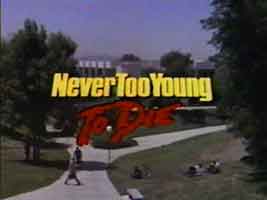 Overview: John Stamos as the son of a secret agent, who must take up his father's fight to stop an evil hermaphrodite (Gene Simmons) from poisoning the water supply.

The Case For: John Stamos, Gene Simmons, and Vanity in the same movie.

The Case Against: John Stamos, Gene Simmons, and Vanity in the same movie, editing that causes hemorrhaging. 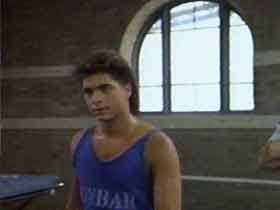 John Stamos IS Lance Stargrove, the gymnast son of secret agent Drew Stargrove. Vanity IS Danja Deering, Drew's painfully ineffectual ex-partner. Gene Simmons IS Velvet von Ragnar, the fiendish hermaphrodite holding the world for ransom. The result IS about what you'd expect from a movie featuring Uncle Jesse, the demon from Kiss, and a woman who once seriously considered changing her name to "Vagina" because Prince told her to. John Stamos gives such a believable performance that I never once thought of him in a Full House context. In an unrelated note, I'm insane. "Never Too Young to Die" is not just a star vehicle, though. It also serves as a perfect example of the editing style known in filmmaking circles as "really bad editing." Bon appe-freaking-tit.

The movie opens with an aerial view of a city at night, then quickly cuts to a mountain lair, where a bunch of leather clad mutants chant "Ragnar! Ragnar!" Every one of them looks basically the same, making it nice and easy to identify the bad guys. I have to imagine that the application for membership in Ragnar's army consists of a few simple questions.

Not one to leave his fans waiting, Ragnar appears. There's nothing like Gene Simmons in a costume straight out of "Rocky Horror Picture Show" to get an audience going. Specifically, it gets them going right out the door (I made a funny!). He calls his followers "scumbuckets," and they love it, which is good, because that becomes the dominant form of insult throughout the entire movie. Setting the suspenseful tone that endures for the rest of the film, Ragnar reveals every detail of his plan. We're still in the first twenty seconds of the movie, here, people. Apparently, he is going to divert toxic waste into the water supply through Diablo Canyon, but he needs a disk. Some of his mutants bring him a young woman. Ragnar recognizes the crest on her earring as belonging to to his archnemesis, Drew Stargrove. His army chants for "the finger," so Ragnar stabs the woman with his fingernail, somehow killing her. The camera zooms out, while Ragnar screams for Stargrove. The woman's body is somehow absent from the shot. 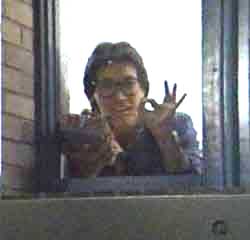 Speaking of Stargrove, which is basically how all the edits in this movie were decided, the scene changes to the Dunbar college (I think) gym, where John Stamos, A.K.A. Lance Stargrove is bouncing on a trampoline, while other people make numerous gay references. Don't misunderstand me, he's bouncing in a heroic fashion. He even has his own theme song. That's right, someone actually wrote a Stargrove theme song. Hooray for Satan. Suddenly, Cliff, Lance's roommate, appears in the window, holding a gigantic remote control. Cliff is a bookish Asian who is amazing with electronics. But he's not a stereotype! John/Lance gets off the trampoline, and tires to go to the locker room. His path is blocked by two beefy wrestlers, but Lance outsmarts them with the "You've got something on your shirt" trick and slips by. The wrestlers grab each other's breasts in frustration. Hmm... so Lance is athletic and quick-witted. Well, that won't come into play later! No, really, it won't.

Lance then cheats on a test by having Cliff send the answers via gigantic remote control to his watch. Lance and Cliff ride on their bikes for about two seconds, just one of the completely unnecessary scenes that permeate this movie. In their dorm room, Cliff shows off his newest invention - a goddamn flamethrower called the Fireblazer. According to Cliff, it consists of "Explosive laser, sling, and some petrol," and supposedly has the capacity to blow up the entire building if mishandled. It does not strike Lance as the least bit odd that his roommate built a weapon of incredible magnitude, or that he has access to items such as an "explosive laser." However, when he discovers that Cliff opened a care package that was meant for him, it's ass-whooping time! The dean bursts in, like deans do. It is then revealed that Lance's father works for an oil company, and that he never shows up for parent's day. Lance says that he's coming this year, but then says that he isn't about ten seconds later.

Speaking of his father (note the beginning of a trend), Drew is searching around inside a dam with his team of heavily armed men, including a fellow by the name of Corruthers. Just after Drew blows a hole in a wall with the crappiest C4 charge in secret agent history, Corruthers knocks out the rest of the team, then shoots Drew twice in the leg and runs away like a sissy. Drew chases after him, not slowed at all by the two bullets in his thigh, but he escapes. Back at school, Lance is sad that his daddy isn't there, although he specifically said in his last scene that he wasn't going to come. He looks at the clock, but that wouldn't be an obvious enough cut, so he looks at his watch, too. 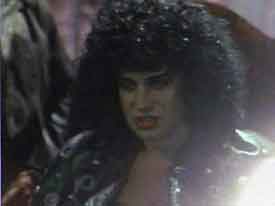 Speaking of watches, Drew looks at his. One of his men, now conscious, tapes up his leg. Speaking of tape, Lance tapes up his hands for his gymnastics meet. Do you get the system yet? Can I stop this? Inside the dam once again, Drew runs into a whole mess of Ragnar's people, who are all armed to the teeth. None of them get the idea to shoot, though, as Drew has the time he needs to pull out his secret weapon - an umbrella. A bulletproof umbrella, mind you. One might think he could use his bulletproof umbrella as a shield, while shooting at the cluster of enemies from the side. One would not yet be inside the head of Gil Bettman. Drew drops the umbrella, then shoots, leaving himself completely open. He gets shot in the shoulder, which serves him right. Drew is brought before Ragnar, who demands the disk. Drew responds by stabbing one of the henchmen in the hand, then escaping from a room full of armed guards. It would all be very impressive, except that it's not. Ragnar catches up with him, spouts off some effeminate cliches, then blows him away. Speaking of things that suck, Lance falls during his gymnastics meet.

At Drew's funeral, Lance notices an attractive woman named Danja Deering, so he accuses her of sleeping with his father. Drew's lawyer gives Lance the deed to a farm that his father owned. Lance declares that his father didn't work for an oil company. He's right, sure, but he has absolutely no evidence to lead him that realization, so, by default, this movie blows. There is a short scene between Lance and Cliff, which is so unnecessary that it actually makes negative sense, physically sucking sense from other portions of the movie. The next scene is at the farm, so I have to assume that the only purpose of the exchange between Cliff and Lance is so I can't say "speaking of the farm." Or can I?