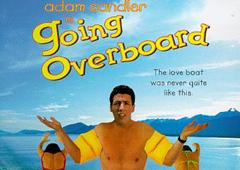 Overview: Shecky Moskowitz (Adam Sandler) stumbles around a cruise ship, matching (half)wits with evil stand-up Dickie Diamond. Shecky wants to be the ship's comedian, but Dickie is an asshole and won't give him a chance. There are also assassins from Panama, a lot of beauty pageant runner-ups, stupid gags, and a ridiculous excuse for a plot. It's the "Titantic of comedies" in that it's best kept thousands of feet underwater.

The Case For: Watching Adam Sandler make a total fool out of himself may make you realize that everybody's got to start somewhere and if you work hard enough you'll be successful eventually. Nah, nevermind, life sucks.

The Case Against: More bad jokes than a Fireman Comic, inexplicable cuts to random things, the most disgusting kiss ever captured on film, at least twenty minutes too long, not funny. 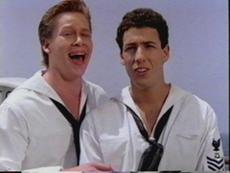 Before getting his break on Saturday Night Live, co-writing and starring in one of the best stupid comedies of the 90's, "Billy Madison," followed by a string of other kinda similar movies that actually made tidy profits (up until the disaster that was "Little Nicky"), a very young Adam Sandler boarded a cruise ship traveling from New Orleans to the 1988 (1989?) Miss Universe pageant and slapped together a feature film.The result? "Going Overboard," A.K.A. "Babes Ahoy," and "The Unsinkable Shecky Moskowitz."

Being somewhat of a Sandler fan, I actually bought this movie thinking… well… how bad could it be? The box even promises "big laughs on the high seas," "zany cocktail waiter(s)," "stunningly gorgeous beauty queens," and "antics (which) rock the boat in this hilarious sea adventure which contains hysterical comic sketches and sexy fantasy sequences."

I made a terrible mistake. 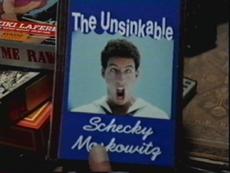 General Noriega watches this movie throughout the movie. He's actually watching the movie we're watching, but he's watching it live since he dispatches assassins to kill one of the characters despite the fact he's viewing a tape he rented from a video store. If you actually cared, you'd be confused.

"Going Overboard" opens with one of the longest, most unnecessary opening credits sequences I've ever seen. It features a very Jewish, almost Gilbert Gottfried-looking, poorly animated cartoon Adam Sandler at a microphone doing stand up, slowly spouting word bubbles that display the names of the cast and crew. I think this is supposed to imply that everyone involved with making of this movie is a joke, but I'm not quite sure. After about ten minutes of this the movie opens with a foreign dictator guy sitting at his desk. He says, "Eat me." Now that's an opening line. It turns out that this guy is General Noriega (Burt Young), and he's looking through stacks of porno videos, one of which is entitled "Eat Me." Oh ho!

A bit of a historical side note here: for those of you who don't remember, General Noriega was essentially the dictator of Panama for a bunch of years until the U.S. went down there to kick his ass in 1989. They arrested him on drug charges, convicted him, and he's currently serving a 40-year prison term in Florida. When this movie was made everybody knew who Noriega was and including him in the movie might have served as a cute topical joke, but now his inclusion only serves to remind you that this movie was made in an era that firmly believed M.C. Hammer was a talented individual.

The "real" movie begins with a bunch of alien beauty pageant contestants in a black hole talking about Shecky Moskowitz (Adam Sandler). They say things like "I was in the elevator with him the other day, and there was a foul smell" and "he has great concepts about life, but I wouldn't want to touch him." Then we cut to a cruise ship getting ready to set sail. Shecky jumps out of a cab, greets the audience, and makes a big long speech to the camera about how this is no-budget movie and they're only making it because they had access to a boat full of beautiful beauty pageant girls. He promises everybody will have a great time, though! Then to demonstrate the low budget, he makes the camera shake and pretends to be in an Earthquake. Then he climbs aboard the cruise ship (this takes awhile because there's a lot of stairs and he waves around his arms like a chicken, I think this is supposed to be a "gag") and the movie now really, really, begins (sorta) but Shecky maintains the "self-aware" routine throughout the movie and constantly addresses the camera. This is very annoying. It also hurts to see how bad Sandler's acting is in this scene, and it doesn't get any better, I soon learned. He really is astonishingly not amusing and very awkward. 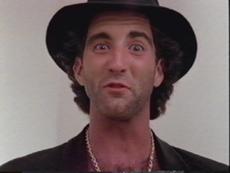 Dickie Diamond, the best stand-up comedian villain in the history of film. Actual joke: "Nice teeth! What, are you doing stunt work for Mr. Ed?"

It turns out Shecky is a waiter aboard this ship and he changes into a little sailor's suit to start serving drinks to bitchy customers. One of them is really surly and when Shecky goes to bring her a second drink a flying bird poops into the glass. Now as we all learned from "Framed," sudden bird feces equals big laughs! He serves to drink to the bitchy lady anyway, then looks at the camera, winks, and waggles his eyebrows, apparently forgetting that this isn't a silent movie and nobody does that tired old shtick anymore.

We are then introduced to the other main characters of the movie, the villain is the ship's "comedian" Dickie Diamond, an annoying, vulgar, unfunny jerk with a grating laugh. While girls surround him, he delivers his first joke, which is something to the effect of "so I was giving it to her hard, and she was going crazy, pulling at my chest hair and squeezing my nipples and I had to say, 'hey, this has got to stop, OK… Mom…'" and all the girls crack up. Most of Dickie's "routine" revolves around incest, swearing, or giving people the finger. Shecky whines because he wanted to be the ship's comedian, but was turned down. So Shecky's lipstick-wearing best friend, Bob, comes by to introduce himself and laugh at Dickie's jokes. I think Bob is supposed to be the "straight man" in this movie, but it's hard to tell since he's wearing a sailor's outfit and constantly leaning on Shecky's back. [Watch Dickie Diamond's "hilarious" intro and Shecky whining like a little girl (845K, Windows Media)]

After cleaning up some vomit, Shecky says "Oh, hello there!" and makes another address to the camera recapping what has happened so far. Later, he goes to check out Dickie Diamond's act and tries to stop Dickie from insulting a random woman in the audience. When Dickie doesn't stop, Shecky pulls out a gun, fires a sound effect, and shoots Dickie dead. He kicks the body off the stage and proclaims, "There's nothing heavier than a dead comedian!" The audience roars with laughter. Huh?! Shecky then proceeds to tell some of his jokes, which ironically enough are just as unfunny, if not even worse than Dickie's purposely bad jokes. But the crowd eats it up. Too bad it turns out to be a brief fantasy and in reality Shecky just stood there making a sad face while Dickie mocked him. Oh boo-hoo. 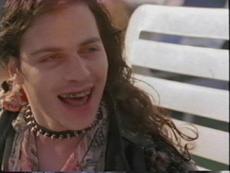 The rock star in this movie is the lead singer of a band called "Yellow Teeth," yet he's not British. What gives?

Next there's a scene with a rock star (the lead singer of a band called "Yellow Teeth") and his manager. They're arguing about the differences between action figures and dolls. Shecky comes by and explains to the audience that "they have nothing to do with this flick, they just threw them in for variety." Then the rock star's girlfriend says "rain man" instead of "rain check" and is rewarded with one of the most disgusting, vomit-inducing French kisses in the history of everything. The rock star tells Shecky that he used to work in a rib restaurant and get food stuck underneath his fingernails, which leads Shecky to whine again about how he wishes he was rich so girls would like him. This abruptly cuts to a beauty pageant contestant sequence where the girls talk about what they'd do if they had a million dollars. They don't say anything remotely interesting or funny, even in a "haha what a ditz!" kind of way. Afterwards Dickie Diamond dances on the deck to the annoying theme song with a bunch of girls lounging in chairs while Shecky (I think) attempts physical comedy by serving drinks while shaking his tray a little unsteadily. This is not a pretty scene.

Suddenly it's dark and Shecky is at the bar whining to the camera again about how he's not funny and can't get girls. Yeah, we got that the first time. The rock star turns to Shecky and tells his restaurant story again, only this time he adds that he used to shit in people's food. Charming! Then some lady named Bluebell (?!?) comes by to sleep with the rock star's manager for money. Even Shecky's gay sidekick Bob picks up a chick, which only causes Shecky to whine even more. Some lady sits down at the bar next to Shecky, so he says hello and the woman yells at him for trying to hit on her. She leaves and Dickie Diamond sits down. So Shecky asks Dickie if he could open up for him one night, but Dickie acts like a total ass and keeps screaming "I don't care!" Then the girl Shecky hit on comes back to the bar, and it turns out that she's Dickie's girlfriend! Oh no! Dickie punches Shecky in the eye and says "There's your punchline, you stupid fuck!" HAHA!

Shecky whines some more about women to the camera, there's another beauty contestant sequence that comes out of nowhere, and Shecky meditates all night long to feel better for some reason. Then he announces to the camera that he's going to go to sleep to "escape reality for awhile." He has this really great dream where he's in a white room tied up in a straight jacket with an apple in his mouth while Dickie Diamond insults him ("You've got an apple in your mouth! Where's William Tell when you need him!") and calls him a loser while some scary lady plays rimshots. During this sequence, Dickie utters the only joke in the whole movie that made me laugh, and only because it was so astonishingly bad. [Watch the horrific "bad dream" sequence and Sandler doing a poor Michael Richards impersonation (876K, Windows Media)]

Shecky wakes up and announces that he's going to have a good dream instead. So he dreams about making out with some shovel-faced blond on the beach. This dream is eventually interrupted by Shecky's "Mom", who in reality turns out to be Bob trying to wake him up. When Shecky comes out of it he tells Bob that he looks a lot like his Mom. I think this was supposed to be a joke, but I'm not sure since he says it so seriously. They head to the bar again and Shecky tries out one of his "new" jokes. Here it is:

And you wonder why Shecky isn't the ship's comedian!