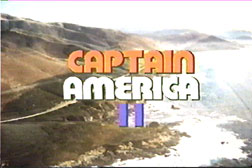 Overview: I'm not sure exactly how "cool" Captain America can be as a super hero even when he's not part of a terribly-made movie from the early 80's. I mean, think about what his super powers are. He's pretty strong for a pasty white dude, true, but other than that he has a motorcycle that is painted red, white and blue. And he has a crazy plastic shield-thing that he can use as a sort of boomerang weapon. And that's it. No x-ray vision, no ability to fly, nothing. Oh, and he's AMERICAN too, we can't forget that. Perhaps this is where his power comes from. But if the movie Captain America II is any indication, his only discernible super powers consist of being incredibly useless, being a closet pedophile, and occasionally painting horrible pictures.

The Case For: This movie has the best of everything. It has adventure, intrigue, guys named Steve in tights, and dogs. It also has a lovely soundtrack, especially if you are over 60 years of age. And if you are a fan of hang gliding, there is a half an hour-long scene toward the end of the movie that you should definitely see. USA!

The Case Against: This movie isn't very good. I am not saying this because I am biased and don't like movies that star guys named "Reb." It's just that I don't really like movies whose main character looks to be a less-than super pedophile hero who paints and gets into fights a lot. But plus the name "Reb" is just stupid. I mean, seriously, who names their kid that? 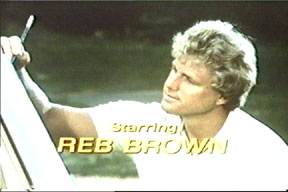 The movie begins with some terrible 80's sound effects accompanying a large, ugly van tooling down the road. It was that one 80's effect that got overused for a long time. The one that was fairly high-pitched and that went BOOOooooo. BOOOooooo. This sound is repeated over and over for the duration of the movie at seemingly random intervals, presumably to add to the "tension." The 80's music quickly gives way to some bastard child of elevator music crossed with the theme from a generic soap opera, and the hideous van is still seen passing through a lot of varying geography. GO VAN GO! Inside of the van is our hero, Steve, who is also known in small, elite circles as Captain America. The Captain smiles an awful lot for no apparent reason.

MEANWHILE, some laboratory inspectors are on their way to view the lab of some crazy scientist-type guy who has been working on a top secret project. Alas, when they get to the guy's lab, he is gone and the lab is in ruins. Everything is broken and the only clue that they can find is a piece of glass in which the scientist has etched the letters "MIGU" with a weak acidic solution. From this, they conclude that the lab must have been destroyed by the infamous terrorist Miguel! Sounds like a job for a real super hero! Certainly not that Captain America fag, that faggy faggy fag. He wears blue tights.

Speaking of our man Steve, as this is all taking place he is placidly painting the portrait of an old lady in the park. The old lady tells him that lately she and her geezer friends have had some significant trouble cashing their pension checks because every time they leave the bank a group of thugs robs them. OH NO! Steve is very upset, and in a scene where he appears ready to make out with the old woman he assures her that she no longer has to be afraid of being robbed.

Shortly after this conversation, the old lady goes tot he bank to cash her check. When she 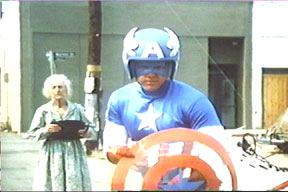 leaves, a sinister-looking character follows her and attempts to rob her. Luckily, our hero Steve has been following in close pursuit and launches himself from his van in full Captain America regalia. He then enters into an incredibly lame fighting sequence in which he throws his plastic shield at the guy. The shield travels slightly faster than a very fast slug or perhaps an injured turtle of some sort. In any case, the perpetrator has a very difficult time getting out of the way and is knocked out by the very slow spinning shield of DOOM! The shield then pulls some sort of boomerang thing and zooms back to Steve. The thief guy's accomplice tries to escape in a nitro-burning funnycar but Steve runs after him and is able to catch him thanks to his Captain America powers.