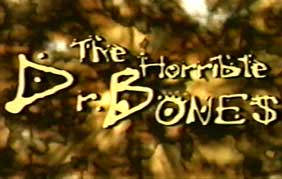 Overview: A voodoo witch doctor who is also a record producer plots to take over the world by inserting subliminal messages into the music of a crappy R&B band and aims to turn all listeners into zombies. There is no way that I can make this overview any funnier than by simply mentioning the plot synopsis. IT IS THAT BAD.

The Case For: If you are a masochist and love those movies in which the down and out band finds success via a voodoo record producer, then this movie is for you! It is also for you if you enjoy tedious hours of terrible R&B music and even worse acting and dialogue.

The Case Against: Perhaps I need to mention again that this movie contains a voodoo witch doctor who wants to make people transform into zombies with subliminal messages in his R&B band? No? Ok, well then suffice it to say that this movie, well, it just isn't very good. 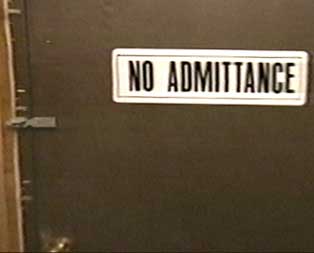 The sign on this door indicates that people will be passing in and out of it repeatedly for the duration of the movie.The Horrible Dr. Bone$ is one of those movies that are easily passed over in the video store. To look at the box, one would assume that it was just another horror movie whose plot revolved around a twisted voodoo doctor and his diabolical schemes to sign unknown bands to his record label, infuse their songs with subliminal messages, and turn the listening public into his personal army of zombies. When the movie is actually watched, however, one realizes that this is in fact exactly what the movie is about, only as a bonus it is full of horrible, gut-wrenchingly saccharine R&B. Another in an unfortunately long list of movies which deal with the struggling up-and-coming musicians trying to get a sweet record deal, The Horrible Dr. Bone$ fails not only in the plot department but in every other department I can think of, including lingerie. And also in that weird department that is sort of like lawn and garden but they don't sell bug-killer like normal lawn and garden sections.

Before the movie even starts, you are treated to advertisements in which you are invited to purchase its soundtrack for the low, low price of $19.95 and YOUR ETERNAL SOUL (plus shipping and handling). Accompanying this is a trailer for a movie called "Ragdoll," which is made by the same people as "The Horrible Dr. Bone$." You are also invited to buy an actual Ragdoll doll and a Dr. Bone$ doll to add to your collection of overpriced, D-grade horror movie toys. This is not advised, as the rag doll in Ragdoll seems to have a problem with killing people and a Dr. Bone$ doll might have voodoo powers that cause people's heads to explode or (the worst) cause bad R&B to play wherever you go, driving you slowly but irrevocably insane. 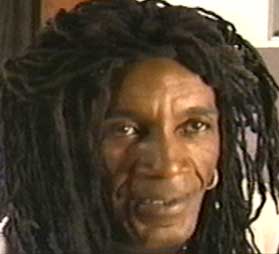 OH NO! THE HORRIBLE DR BONE$! HE IS SO HORRIBLE!

The movie begins with a sinister woman leading a guy through a series of maze-like hallways and through a door with a sign that reads, "NO ADMITTANCE." The dynamic duo walk down a long flight of stairs into what looks like a really messy construction site inside a basement. The guy is left standing in the middle of an empty room while the woman heads into a sound booth with two other people, one of whom is THE HORRIBLE DR. BONE$, who looks like a reject from a circus sideshow crossed with Bob Marley and then hit by a truck. The music is turned on and the guy in the room is instructed to sing. He sort of bops around retardedly for a few minutes, but when the woman turns some sort of dial up too high, the guy's head explodes in a burst of terrible special effects and Dr. Bone$ says grimly, "Another experiment failed, and my patience is wearing thin!" This is the point where I would usually make a joke about something, but I don't really think that I even need to, seeing as THIS MOVIE IS PRIMARILY ABOUT A VOODOO GUY USING A CRAPPY R&B BAND TO TURN THE WORLD INTO ZOMBIES.