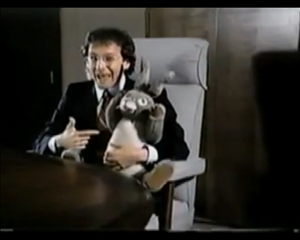 Then there's a scene where everyone's screams about this rabbit for awhile.The majority of the 'action' consists of Chip meandering through High School School High being awkward, usually by literally acting out such common expressions as "keep your fingers crossed," "I don't want to hear another word out of you," "go blow a goat," etc. Obviously this embarrasses poor Becky, who tells Chip that if he doesn't start picking up on cooler slang everyone will think he is "a total lame-o" and she won't get to bone Beefy McStudderboat. But fear not Beckatron, turns out that acting like you're mildly autistic is the best way to attain popularity in a suburban high school! In fact, one cute blond in particular is so fond of Chip that she blatantly achieves sexual release on-screen whenever he appears. Pretty Blonde Girl actually kind of scares me, wooing Chip with such sexy pick-up-lines as "You're cute. Is your dad as cute as you?" Oh Chip, you suave tiger you!

But all is not well! Disney rather amusingly decided to make their villains TOY TYCOONS, you know, ludicrously wealthy WASPS who make billions of dollars off of brainwashing little kids? Oh ho ho. Anyway, the comedy in Not Quite Human that doesn't come from Chip be-booping around stems from watching the two main villains -Dr. Dad's boss and his gibbering sidekick- be silly grown-ups. They like to shout a lot and call each other MISTER this and MISTER that until their elaborate hair pieces fly off, as well as calling everyone and anything TWERP, sort of like Team Rocket but with more erectile dysfunction. They're angry at Dr. Dad because he was supposed to build them a prototype for a new toy to seal a deal with a big company, but instead he made a midlifecrisis-bot and skipped town. That sounds a lot like breaking a contract to me so 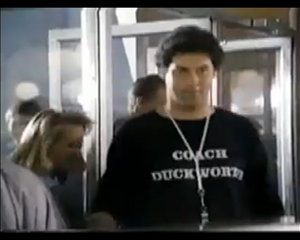 raddest shirtMISTER Mister and Friends probably could've just sued his ass off, but instead they decide to lurk around in vans and snap photographs of nubile high school students.

MISTER Mister's genius plan is to hijack Chip because he has super secret indestructible technology, so he can use Chip totake over the worldmake a really cool toy! Fortunately when they finally kidnap Chip after spending 20 minutes trying to break into a child's bedroom, they find him protected by a sophisticated "anti-reprogramming device." Yeah it goes without saying that every electronic device in this movie blinks a whole bunch and makes noises like a hyperventilating goldfish. Behbloopabloopabloopabloopa!

Anyway after a long scene of arhythmic swiveling at the school dance, the villains decide that shouting isn't mean enough and do weird shit involving televisions and bull dozers and some vaguely threatening meandering, but not enough to make Mommy and Daddy steal their whimpering baby away from the evil mean picture-box. The dramatic finale involves Dr. Dad and Becky in some sort of mortal peril that Chip remedies by running forward in a determined fashion. Then he inexplicably dies. Really, that's the end of the movie. Forever.

Or it would've been, if they'd only had a heart.