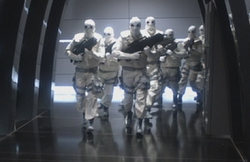 Speaking of liquefying and brains, let's meet our cast of intrepid Factioneers! Carrying the burden of cool badassery on his square masonic shoulders is Grip Wreckblast Jake Mason, hardass Martian warrior princeling, who knows all of the weird tricks to surviving life in the harsh outlaw deserts of Mars, like for example:

Above all, Jake specializes in pausing the action to have really long and impractical flashbacks to his traumatic abduction-filled childhood, because character development through dialogue is way harder. At least we're in the hands of a pro director, who knows that vignetting is synonymous with both trauma and art as a whole, and proceeds to use it in every part of every frame of every flashback because that's just what memories look like:

Despite the fact that he's generic enough to be, well, a video game protagonist, Jake is really the only being in this miserable tale that actually registers as a character of some kind. There's lots of assorted cannon and/or plot fodder running around:

While we're on the subject, we'd like to take a moment to clear some things up here. There've been a lot of nasty, hateful rumors and ridiculous myths getting spread around lately by people from a certain red planet about people from a certain blueish greenish planet and it's about time somebody spoke up and set the record straight. For example, it's actually NOT true that people on Earth carry umbrellas everywhere all the time in case of rain and then laugh casually and twirl their umbrellas when it doesn't rain because it's really no big deal since it'll just rain some other time anyway, or that everyone on earth lives on/next to an ocean and eats nothing but crabs and seal cheeks all day while they take their yachts to work through the Panama Canal.

Sure, maybe there're a few bad eggs here and there, like the idiot frat boys lighting their farts on fire on YouTube, or printing out rasturbated posters of the face of Mars and drawing dicks all over it/making it look like he's picking his nose, which is so offensive to native Martians that there's not even a direct translation for it (although one political philosopher at Briggs Crater Community College reportedly described it as being akin to the image of slapping God in the face with a dead shriveled whale dick, which is sort of a metaphysical double-whammy because whales don't even exist on Mars) -- but it doesn't mean we're all a bunch of vulgar gluttonous avocado-gobblers down here!

On the flipside, we here on Earth could really do a better job of keeping stark Martian sensibilities in mind. Next time you take our rich, thick atmosphere for granted by setting a forest fire or smoking one of those yard-long "El Presidente" cigars at your Douglas Quaid Memorial weekend marathon backyard bonfire-BBQ, maybe at least take a moment to appreciate the natural gifts of breathable atmosphere and clean, natural water untainted by roofies that you're actively destroying because it's really fucking fun and feels downright great to do. Or don't, we don't give a shit.