Overview: A dead serial killer trapped inside the body of a giant dead snowman seeks revenge for being killed in the previous film. Don't ask. This is one of those films which is supposed to be "tongue-in-cheek" and "funny," but it instead turns out to be a nonstop test of gag reflex suppression.

The Case For: The "Captain Fun" character is played by such an incredibly talentless Jim Carrey-wanna be that anybody watching this film will immediately develop an intense hatred of Jim Carrey. The more people who hate Jim Carrey, the less films he makes. The less films Jim Carrey makes, the higher chance that he'll go into a deep depression and suffer a fatal drug overdose.

The Case Against: The amount of money you'll have to pay to rent the movie undoubtedly dwarfs the entire budget of this film. 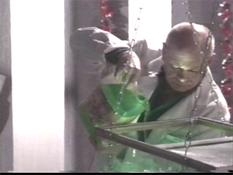 In films like "Jack Frost 2," highly scientific chemicals have a bright neon glow. This is because they're so scientific and all.

I'm sure choosing to review "Jack Frost 2" will undoubtedly create controversy amongst the members of public who have nothing better to do than argue over movies about snowmen who murder people. You see, unlike the rest of the films reviewed on Something Awful, "Jack Frost 2" was not created solely as a horror movie, but was also intended to be a comedic film, like "Evil Dead 2," "Army of Darkness," and "Saving Private Ryan." However, "Jack Frost 2" fails on two important issues:

When a movie strives to incorporate both horror and comedy into a single production, then fails to accomplish either, you know you've got one of the world's most painful bombs on your hands. You see, the lure of bad horror films lies in the fact that the sheer awfulness of the movie creates a new level of entertainment. Although the film was originally meant to scare and frighten viewers, it inadvertently becomes a comedy. Every single example of blatant overacting, shoddy underacting, or special effects which would look tacky in a 6th grade science fair gets a bigger emotional reaction than any scene which attempts to convey horror via a fat sweaty guy in a wolf costume. So when a film tries to add a comedic element, and the aforementioned comedic element was composed on a bar coaster by 13 year-olds with advanced cases of ADD, you end up with a film which fails on so many levels that science has yet to identify and label all them. Am I making myself clear here? This movie isn't just 100% crap; we're talking about a film which must've invented experimental new compression algorithms to cram 680% crap into one single package of filth. With that out of the way, let us proceed to the parade of shame and failure.

In case you were fortunate enough to be incarcerated or dead when the original "Jack Frost" crept out of the dumpster and found its way into video stores, allow me this chance to summarize what you missed:

1) Serial killer kills people.
2) People decide to kill serial killer.
3) Serial killer is killed on his way to be killed, but his "evil genes" become genetically mutated and mix with water.
4) Evil water turns into evil snowman, who proceeds to continue killing people.
5) Somebody kills evil snowman.
6) Director kills all remaining shreds of dignity and decides to release film instead of burning every last shred of it, as the Pope advised him to do. 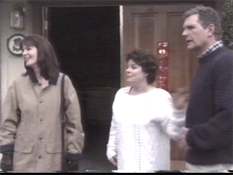 The outside of the "airport." Hahaha, okay, whatever you say, magic movie!

As is standard in most horror film sequels, the evil bad guy somehow returns from the grave to exact revenge on the remaining cast members from the previous film, assuming none of them have taken their own lives between productions. Jack Frost's molecules of evil, which were supposedly defeated after being injected with antifreeze in the first film, are dug up from the ground and examined by people who have access to white lab coats and beakers. These so-called "scientist" begin performing a rigorous series of tests on the evil genes, apparently attempting to answer the immortal question, "what happens if I mix a green-colored chemical with a red-colored chemical?" The answer, of course, is that the chemical begins to bubble a lot and turn a different color. Movie science is a lot more pretty and direct than "real life" science, which is all about molecules and atoms and various other stupid, un-colorful, boring shit that usually doesn't get really foamy when mixed with other chemicals.

Sheriff Sam Tiler, who went through hell in the previous film during his attempts to capture and arrest a mutant killer snowman from hell, is introduced in a psychiatrist's office, detailing his intense fear / hatred / lust for Jack Frost, which he does through prose. Every line rhymes with the next, creating a very intense and foreboding atmosphere, not unlike a crime scene or Shriner convention. While Sam relays his innermost fears and worries, the psychiatrist and people in the next room (which consist of a secretary, doctor, nurse, electrician, and morons in every single possible outfit they could find in the prop box) laugh their asses off and humiliate the poor guy. I imagine this is a dramatic reenactment of what occurred when the director pitched this movie idea to the production studio.

Cut to the fake high tech laboratory, which is full of fake high tech scientists attempting to study fake chemicals. The mutant Jack Frost evil genes, located in a green aquarium, are being measured and tested for some inexplicable reason. No justification is ever given as to why somebody bothered digging up Jack's genes in the first place, and to be quite honest, I never really gave a damn. The only thing I was concerned with was when Jack would get melted and die again, as every second of this cinematic abomination took 10 years off my life. A clumsy janitor comes in and accidentally knocks a cup of coffee into the evil Jack Frost genepool, causing it to ice up and explode. The ice melts and Jack escapes into the sewer system. Woo-fucking-hoo.

Back in Snowmantown or Snowville or Snowydeathtrap or whatever the hell the redneck town is, Sheriff Sam, his obnoxious wife Anne, and their braindead husks of flesh friends Joe and Marla are planning on taking a trip to the beautiful Bahamas. It's Christmas again, and Sheriff Sam desperately needs to be someplace other than Snow(whatever)town, the location of last year's snowman-related murder spree. Everybody else in the town is apparently unaffected by that rash of mass murders, as they seem fairly apathetic. Only Sam sheds a tear for the corpses of the 382 thousand people who were murdered within roughly 90 minutes last year. Anyway, Sam and crew are preparing to board a plane to the Bahamas, despite the fact that the supposed "airport" is simply somebody's house. All they did was add some airplane sounds from "BOBBY JOE'S FAMOUS HOLLYWOOD SOUND EFFECTS" cassette tape and bam, instant airport. Ignore the mailbox outside the door and the plants on the porch, it's an airport goddammit. They all walk into the director's house - I mean airport - and soon they land in the sunny Bahamas, which is represented by stock footage of a beach shot in the late 1940's. This stock footage is the closest the movie ever gets to convincing the audience that the cast is now in the Bahamas. The entire "Bahamas" set simply consists of some guy's house with fake palm trees placed everywhere. Halfway through the movie, in the middle a party, you can actually see the actors' breath when they exhale. I swear to God I am not making this up. I've got some advice for all you budding directors out there: if you're planning on making a movie that takes place on a tropical island, make sure you don't film it in a location with subzero temperatures, you moron. Although nothing says "tropical island" like seeing the heat from somebody's breath, it kind of ruins the credibility in your film. Not like a movie based around a mutant snowman is exactly the pinnacle of reality to begin with, but at least use common sense.