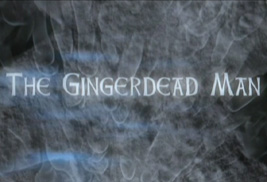 Overview: Gary Busey turns into a serial-killing cookie and runs around stabbing white trash for just over an hour.

The Case For: Maybe you have some bizarre cookie fetish and run a Web site devoted to Photoshopped pictures of Gary Busey turning into a gingerbread cookie. In that case, the movie would almost be worth your while if it didn't fucking suck.

The Case Against: See that screencap of the intro over on the left? That's the one screencap I got before the movie fried my computer's DVD drive.

In this picture Crok shows us exactly how the movie lets us know that Gary Busey is, in fact, starring.

I know my reviews are prone to huge exaggerations. I use them to make points about the movies I watch. It is my shtick: I can only hope that, in the future, my comedy stylings will become as effective as the "Like that one time…" scenes you see about ten times per Family Guy episode.

However, with "The Gingerdead Man," there's not much need for exaggeration. In fact, if a brief synopsis of the film doesn't turn you away from it, you are undoubtedly a moron and likely a member of the "Gingerdead Man" production crew. If that's the case I ask that you stop reading this review and go back to work. Those panties at the Laundromat can't sniff themselves!

In short: "Gingerdead Man" stars Gary Busey as a deranged serial killer who comes back to life in the form of a gingerbread cookie.

Now, using the Evan "Pantsfish" Wade comedy magic we've all come to know and love, I will italicize a few things throw the word "fucking" in a couple times to make it twice as funny:

"Gingerdead Man" stars fucking Gary Busey as a deranged serial killer who comes back to life in the form of a fucking gingerbread cookie.

However, that wasn't quite bad enough for the fine folks at "Full Moon Productions." Apparently in lieu of using their money to, you know, make a good movie, they decided to spend it on a team of psychics who told them SA was going to be reviewing the film. Then, they hired a crack team of mercenaries to break into Netflix headquarters and replace my copy of the DVD with a big disc made of steel wool and packing tape. Finally, they shipped the "disc" to lovely Bloomington, Indiana, content in knowing what they sent me would fry every piece of electronics in my house.

But you know what, Full Moon Productions? Your ploy won't stop me. Your DVD may have broken not only my DVD player but also the disc drive in my computer, but I don't care. I might have to have SA Forums user "Crok" hand-draw all of my screencaps for me, and I may have to draw my recollections of your movie from bad memory since it would only play all the way through for me once and I was half-drunk at the time, but that's fine.

Do you know why that's fine? Because I am an unethical reviewer and I will make things up about your movie to fit the holes in my memory. Take that, you scoundrels.

Not that there is that much to remember. In fact, the two summaries I posted up above are pretty much the entire plot of the movie. On top of that, after the opening five minutes, the movie takes place in exactly two separate settings, which I will tell you about now through the wonders of bullet point technology:

Thanks for getting the eyelids right, Crok!

It is a little-known fact that "Gingerdead Man" was originally written for the stage, hence its small setting. The stage show was quickly cancelled, however, since people can throw things at live actors. I can vouch for this movie's throwability, since the third victim of the movie's electronics massacre was nearly my television after I started pelting it with rotten fruit on the off chance it would travel through the television like on "Poltergeist" and peg one of the annoying fags in the movie.

But Full Moon Productions did make an attempt to switch things up in the film's beginning. Instead of a bakery or the area immediately outside of a bakery, "Gingerdead Man" opens up in a diner. This is, of course, different from a bakery because diners serve more than baked goods, and also the walls in this diner are pink while in the bakery they're brown and red and sometimes gray.

The opening also features the film's first (and only) Gary Busey spotting. Apparently the folks at Full Moon were so excited at the prospect of signing Gary Busey that they did not read his contract, which said he would only be in the film for a few minutes and that he wouldn't act so much as shuffle around and mumble a few things that may or may not be real words. In fact, it would not be surprising to me if they didn't pay Gary Busey anything, and instead filmed him getting out of bed, then ran away really fast before he could fully realize they were there.

Whatever the case the film opens in the diner with Busey shooting a bunch of people for a reason the movie never really bothers to explain. At one point he sticks his hands in the cash register and kind of moves them around a little bit, so maybe he's robbing the place, or looking for the oxycontin they hid from him so he'd stop puking all over himself during filming. After this brief search, he shoots a man who comes after him with a knife (presumably the place's owner), and a teenage boy (presumably the owner's son).

Okay, so up to this point the movie's making some kind of sense. Busey is robbing the place (maybe) and the owner and his son try to stop him (maybe). Then the girl (who I think is the owner's daughter) has to start talking and fuck everything up.

As a reviewer of bad movies I tend to notice a lot of trends. For instance, with a lot of bad movies, you can't hear a majority of what goes on. Two weeks ago, with "Intercessor," it was because the movie was made by a bunch of incompetent morons who couldn't figure out how to work the microphone they stole from the local VFW's music pavilion. With "Gingerdead Man," however, the inaudibility is on a much more annoying level: it's because every single person in the movie sounds like Boomhauer from "King of the Hill."

The whole movie the characters talk in a fake white trash drawl. I can usually decipher that shit. Hell, a guy I knew in high school had to quit his senior year to take care of a kid he had with his cousin. The school's mascot was a rock, for Christ's sake. But these people… these people aren't trash. These people are a bunch of Californians trying to fit in at a NASCAR party.

But maybe it's just me. Maybe I'm the only person who thinks a director shouldn't force all his actors to talk in some obviously fake accent that makes the movie almost impossible to understand most of the time. Maybe he shouldn't focus on other things, like "making a good movie" and "realizing Gary Busey doesn't have enough star power to sell out a Chuck E. Cheese." Whatever.

During the next five minutes of the movie Busey has some bizarre one-man dialogue with himself about "what momma wants," then shoots the girl in the leg, all while managing to keep his left eyelid exactly one inch lower than his right.

While we're still talking about bad trends it might be nice to mention the next scene, the opening credits. Much like "Hunting Humans," "Gingerdead Man" takes a different approach. Most movies list ten or fifteen key players, crucial in the movie's production. Full Moon Productions, however, wanted to make sure everyone got equal credit and decided to list every fucking person involved in the movie in the opening minutes. That's right! Ever watched a movie and wondered who Grip No. 2 is before things ever get started? Maybe you saw the first five minutes of the film and thought "man, Gary Busey is looking fit. I wonder who the caterer was." Well, ladies and gents, no longer do you have to skip to the end to find out! "Gingerdead Man" knows what viewers want: the name of every backwoods dipshit who was remotely involved in the making of the movie, before the movie even starts!