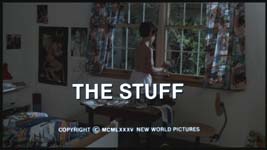 Overview: An ex-FBI agent, a marketing executive, and a young boy have to stop a company that is selling a white goop that controls people's minds and eventually makes them explode for some reason.

The Case For: The cast is full of character actors who are well-known and well-respected, including Danny Aiello, Garret Morris, and Paul Sorvino.

The Case Against: Seeing all those perfectly capable actors doing this crap work is incredibly depressing. The entire movie is based around a thinly-veiled reference to semen.

You might recognize the name of Larry Cohen, writer and director of "The Stuff," from a number of other films. Most of those movies sucked really, really hard. However, he did write "Phone Booth," and that was pretty darn good. However, it sure as hell wasn't good because of the script. You see, Larry Cohen has an odd little quirk when it comes to screenwriting - he can only write competent dialogue for one character per film. For instance, in "Phone Booth," the character of Stu, played by Colin Farrell, was written perfectly well. By comparison, the character of the cop, played by Forest Whitaker, sounded like his dialogue was written by a retarded six year old deaf child from Tibet with severe learning disabilities and nails in his eyes. Likewise, in "The Stuff," the character of Mo, portrayed by Michael Moriarty, is actually written rather well. Sure, not every line is a gem, but hey, it was the Eighties. You could get away with writing the odd line of horrendous dialogue for an otherwise fine character and get away with it. No one cared, as they were all too busy wearing leg warmers and doing blow. In fact, during Mo's first scene, I actually said to myself, "Gee, Ben, you handsome bastard, this might turn out alright! Sure, the preceding scenes were pure, unadulterated filth, but this isn't too shabby!" Unfortunately, as is the tao of Larry Cohen, all of the other characters are written as horrible stereotypes, blatant ripoffs of other successful film characters, or outright morons. The characters stumble through an ill-conceived, fragmented plot that feels as though several incredibly important scenes went missing, sandwiched between a beginning and ending, both of which have definitely earned their spots among the stupidest things I've ever seen. On the other hand, the film quality was cleaned up quite nicely for the DVD, so what do I really have to complain about? Well, it's a movie... called "The Stuff." That's a pretty damn good start.

It starts badly, it ends badly, it's just not a very good movie.

I already mentioned that the beginning of this movie is one of the largest concentrated masses of stupidity that one could ever hope to see in a lifetime of concentrated-mass-of-stupidity-seeking, and I'm fully prepared to back up that statement. Try this on for size: it begins at night at a mining facility. An old man with a flashlight notices something odd on the ground. In the midst of a field of snow is a small patch of a mysterious white, bubbling substance that looks a lot like a giant blob of bird crap and makes horrible gurgling sounds. Naturally, the old man's first reaction to it is to jam his fingers in it, scoop out a big ol' glob of it, and stick it in his mouth. Frankly, if you're stupid enough to put something bubbling up from the ground in your mouth, you are in no way qualified to hold a job patrolling the grounds of a mining facility, and frankly, I wouldn't really trust you to handle that flashlight. One of the old man's coworkers comes over to see why he's not randomly walking around and pointing his flashlight at things anymore, resulting in the following conversation, which I swear is real:

Of course, now that they've established that it's not snow, and that is actually an unidentified, pulsating blob, the coworker eats some of it. Unfortunately, it tastes good, so the movie continues. If only, if only it had tasted like it looks (which is to say, like something that you would never, ever put in your mouth), we all could have been spared a lot of trouble. And by "we all," I mean "I." So now when I say that this is the dumbest intro of any movie ever, do you see where I'm coming from? When the movie begins with two grown men putting a mysterious substance in their mouths without even looking at it hard, there's a pretty good chance that things aren't about to get much better.

Not even the Stuff can resist the taste of Pilsbury's Best! They're grand! Hoo hoo!

We cut - and I do mean "cut," most of the transitions in this movie look like they were done with a salami slicer - to Jason, an average kid who lives in an average house in a average neighborhood with an average, if needlessly abusive family. He goes downstairs for a late night snack, but when he opens the refrigerator, he sees a cup of the Stuff, a new desert, tipped over and its disgusting white contents slowly crawling across the shelf. Jason's father catches him out of bed and shouts at him while shaking him violently because he thought Jason was a burglar. Of course, by the time his father looks in the refrigerator, the Stuff has receded back into its container. Damn you, the Stuff! Damn you and your infernal trickery! Getting Jason in trouble like that, you should be ashamed of yourself! Jason's father sends him straight up to bed, then helps himself to a few gooey spoonfuls of the stuff before putting it back in the fridge. If you ask me, that's just poor etiquette. You don't open a thing of yogurt, eat two bites, then put it back. You either finish it or throw it out. But not so with the Stuff, I guess.

"Why yes," the old man said with a grin, "I did pay for this yacht with prostitution. How kind of you to notice!"

On a yacht somewhere of the coast of a dock, a group of aging executives from the ice cream industry, which is on industry you do not want to fuck with, my friend, meet to discuss how they are going to survive in a market that is quickly being dominated by the Stuff. Enter David "Mo" Rutherford ("D'ya know why they call me 'Mo?' Because when someone gives me something, I always want mo'." Like that joke? I sure hope so, because he says it over and over again.), former FBI agent and currently the best industrial saboteur that money can buy. He's suave, charming, speaks with a comical Southern accent, and looks like Dave Foley on steroids. As he greets the executives, he shakes their hands and makes comments about their sweaty palms. If I have to make the masturbation connection for you, then this website may be a little too advanced for your tastes. The lead ice cream executive, who has no name, so I'm just going to capitalize "Lead Ice Cream Executive" hires Mo to find out what the Stuff is made out of and how they can beat it and get ice cream back on top. Mo graciously accepts the assignment by punching out another ex-FBI agent on board. Well, Mo makes a vaguely punch-like motion toward the other man, and he snaps his head backwards and topples over backwards, despite a lack of actual physical contact and the fact that the punch was aimed at his stomach.

ATTENTION POLICE: THIS MAN SHAKES CHILDREN. DO NOT BE FOOLED BY HIS SLICK EIGHTIES SUIT AND HAIR.

It's breakfast in the Whatever-Jason's-Last-Name-Is household, but Jason is nowhere to be seen. His father keeps rambling on angrily to Jason's mother and brother about how he caught him getting a late night snack. The mother yells at the older son to go get Jason, but he doesn't move within the next eight of a second, so she screams her head off at him. Then Jason finally shows up and his father berates him further for being up so late at night. He's really got to drop the issue. All in all, there is a lot of anger in this house. The mother wants to eat the rest of the Stuff that the father left behind, but Jason begs her not to. She spoon feeds a mouthful to the older son, while he looks lovingly into her eyes, which is frankly the creepiest fucking thing in the entire movie. I've seriously got the heebie jeebies just writing about it. Mmm mmm, that's good incest. Jason slaps the cup of Stuff out of her hand, splattering it all over the counter, and runs out of the house. As the mother cleans it up, she remarks, "Low cal, great taste, and it doesn't spot!" Why, this has got to be the best gooey white substance she's cleaned off the counter since before the kids were born!

Mo interrupts the filming of a new commercial for the Stuff which is directed by a woman named Nicole. Within the first few lines of dialogue between the two of them, Mo calls her "pretty," an act which he and several other male characters repeat over the course of the film. My major beef with this is in part the fact that the only major female character in the movie is objectified by nearly every adult male, but mostly that she is goddamn ugly, and they're not fooling anybody. Mo tells her that he is an oil billionaire who wants her to direct his company's new public campaign. At first she is a little cheesed that he interrupted the filming of the commercial, but he calms her thusly, and I swear this is actual dialogue:

This woman is not hot. Do you understand? Not hot. Just so we're clear.

And they quickly change subjects. So my question is, what story? He didn't tell any story! It's not like he said, "You know, I'll bet there was once a line that a lot of people were waiting in and you said, 'screw this, I'm not waiting in it,' and some studio executive overheard you, decided you were the sort of headstrong person he needed for his advertising firm, and gave you this job." He made a freaking character judgment! Am I the only person who is pissed off by this? Because I am pissed off! I mean, what kind of crap is Larry Cohen trying to pull? Okay, you know what, there's too much movie left to waste any more time on one line of atrocious dialogue. Let's move on. So, Mo manages to keep up his ruse and convinces Nicole to go out to dinner with him. He offers to take her to any restaurant in the city. Since she is a tremendous slut, she picks the room service back at his hotel room. Christ, what a whore.