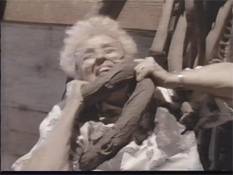 Granny's death is advanced by a few hours.An investigative reporter arrives in town the next day, there to sign the paperwork for his father's death (his dad was the old guy who ran the gas station and was crushed by the anti-elderly weeds). Since his body is mutilated and the police are trying to cover it up, they won't let him see the body. Or maybe the old guy just died in a very embarrassing pose... with another man. This causes the reporter to group up with Matt and Josie, who all head out to the cemetery and discover the old guy's casket is EMPTY! HOLY SHIT, ANOTHER INCREDIBLE PLOT TWIST! The sheriff's right-hand man, Deputy Dopey, arrives at the cemetery and is promptly killed by demon plants who apparently prefer the taste of evil over good. The sheriff apprehends the kids and brings them to an abandoned farmhouse so they can watch him take his turn in being murdered by the evil vines. At this point the action starts moving fast and furious, and no rednecks or white trash are safe from the murderous devil plants. An old woman who we've never seen before is killed while feeding her horse. Some fat yokel with a shotgun is choked in his front yard. Oh, does this movie ever slow down?!?

Matt, Josie, the fat scientist, the investigative reporter, and a couple other random extras along for the free car ride confront Mr. Evil Businessman about the pollution he's dumping into the woods, causing the plants to go crazy and start murdering people, like most pollution does. He responds by laughing a lot, looking like an idiot, and then shooting himself. That's how most small business owners act when you approach them and ask about plants. This is why there aren't that many small businesses left and why the government gives considerable tax breaks to the ones that still exist. The white trash citizens of Nilbog / Smallsville / Cretintown band together and decide to defeat the plants by shoving barrels of radioactive waste around with their bare hands. Of course the weeds don't approve of this, so they react by killing them. Oh yeah, a couple people rent out a helicopter and fly that around for a few hours of footage because the director was obviously very proud that he could afford to rent a helicopter. The villagers' plan doesn't seem to be too successful, mainly because:

Day once again randomly turns to night for no apparent reason, and a fleet of bulldozers crawl over the horizon, saving the day. Yes, you heard me correctly, SAVING THE DAY. The plot is resolved by a bunch of bulldozers PUSHING DIRT AROUND. They don't even kill the plants, they just SHOVE DIRT. Yes. All the plants that were killing people everywhere in Nilbog are killed off when FIVE BULLDOZERS DRIVE AROUND A COUPLE SQUARE METERS OF LAND. I think Laurenti, much like the audience, got sick of the movie and just decided to end it. Thank GOD.

Then it's suddenly Christmas, Josie is pregnant and on the phone, when the camera focuses in on one of the gifts in the background. Suddenly a plant vine pokes out of it and starts thrashing around, shortly before the movie fades to black and ends. You know what, Fabrizio Laurenti? SCREW YOU. SCREW YOU and your godawful ending. I hate you for making this movie. I hate you for making me write this review. I hate you for wrapping up the entire plot in roughly 1/1000th the time of the total movie, and then throwing in this completely idiotic and predictable conclusion. You, sir, are a horrible monster and I pray for your death.

So there it is. The horrible, twisted, mutilated remains of a movie that burned to a crisp even before launching out of the gates. The fiery car wreck of personal shame and degradation that will hopefully result in the directors own demise, assuming he hasn't been knocked off already. Sadly enough, this movie wasn't nearly as entertaining as it's predecessor, "Troll 2." This movie was just dull, boring, uninspired, and took longer than the time the doctor had to remove the five-piece dinette set from my rectal cavity. Fabrizio Laruenti, wherever you are right now, I want you to know one thing: somebody in Costa Mesa, California, really really really hates you. Just like anybody else who's been unfortunate enough to sit through this monstrosity.