Astronauts were allowed to fly after flight surgeons and other astronauts warned they were so drunk they posed a flight-safety risk on at least two occasions, an aviation weekly reported Thursday.

It cited a special panel studying astronaut health, which found "heavy use of alcohol" before launch that was within the standard 12-hour "bottle-to-throttle" rule, according to Aviation Week & Space Technology. It reported the finding on its Web site.

In Washington, Bart Gordan, chairman of the House Science and Technology committee said he hadn't seen the report, "but if the reports of drunken astronauts being allowed to fly prove to be true, I think the agency will have a lot of explaining to do."

I agree with Representative Gordan wholeheartedly and volunteer to interrogate NASA myself. I have a lot of tough questions I think only they can answer. For instance, I would like NASA to tell me why, when my friend Fred was tripping on LSD and thought the walls were trying to eat him, he hid in the corner of the room, the point at which two walls converge. Seems to me at the very least he should have sat in the middle, or better yet found a circular room, because then there's only one wall and it would have been a fair fight. 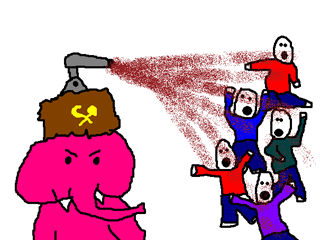 But even more confusing than Fred's folly is how our astronauts became alcoholics. Unfortunately, I fear I may already know the answer: collaboration with cosmonauts. The Russian drinking disease I discussed earlier must be contagious, and the International Space Station is no more than a spaceborne breeding ground for boozehounds. The battle has begun.

The Russians are the aggressors in this reckless war on our mild-drinking ways, and we should not stand down. It is time to muster our troops and launch a sobering strike on the enemy's home turf. I am a firm believer in the Bush Doctrine when it comes to this sort of thing. We must fight the Russians over there, for if we capitulate the contamination will spread, and we'll risk having armies of hallucinatory pink elephants invade our own land, firing volleys of boiling borscht from cannons mounted atop their jaunty bearskin hats as they trumpet a symphony of destruction down our precious city streets.