Remember the mammoths, say the clean-cut organisers at the youth camp's mass wedding. "They became extinct because they did not have enough sex. That must not happen to Russia". Obediently, couples move to a special section of dormitory tents arranged in a heart-shape and called the Love Oasis, where they can start procreating for the motherland.


This organisation - known as "Nashi", meaning "Ours" - is youth movement run by Vladimir Putin's Kremlin that has become a central part of Russian political life. Bizarrely, young women are encouraged to hand in thongs and other skimpy underwear - supposedly a cause of sterility - and given more wholesome and substantial undergarments.

Under Mr Putin, Russia is sliding into fascism, with state control of the economy, media, politics and society becoming increasingly heavy-handed. And Nashi, along with other similar youth movements, such as 'Young Guard', and 'Young Russia', is in the forefront of the charge. If Mr Putin has his way, Russian pupils will learn nothing bad about the Soviet empire, which was far bloodier, more brutal - and more recent. A new guide for history teachers - explicitly endorsed by Mr Putin - brushes off Stalin's crimes. It describes him as "the most successful leader of the USSR". Terrifyingly, the revived Soviet view of history is now widely held in Russia. 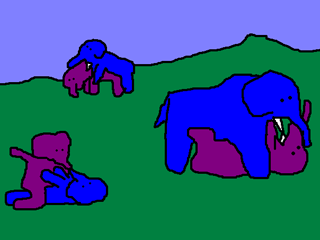 As a child, I loved camp. Some of my fondest childhood memories were formed there, like the time my four hundred pound friend Merlin locked himself in a room with me and told me about his testicular electroshock therapy and genocidal fantasies, or the time I accidentally heiled Hitler in front of five hundred middle schoolers and a Jewish camp director. Both of those things actually happened, by the way, and the distressing clarity of the recollection serves to prove my point about camp in general.

See, while parents send their kids away to become better at soccer or ballet or not being gay, every kid knows the true purpose of summer camp is to knit traumatic memories into the fabric of the mind. Even the blindest drunk, ignorant of his own name and age, remembers with sublime terror and exquisite detail the counselor who locked him in a dormitory closet overnight.

Perhaps this ability to assist the alcohol-addled explains the current camp craze in Russia. I don't mean to imply that all Russians are drunkards, although my good friend Maria has enough ethanol coursing through her veins to legally qualify her blood as biodiesel. This article just makes more sense if we assume their burgeoning social and economic depression has driven Muscovites to moonshine. I do not see how such a scientifically advanced society could, without being blackout drunk, seriously believe that skimpy panties cause impotence, especially when Pasteur proved they cause leprosy like two hundred years ago. Frankly, our Siberian siblings have got me worried. Most political scientists agree that this reckless behavior could trigger a second Cold War and I don't care for summer sequels.