It appears to be that time in my monthly cycle when I get angry about bad mail order collectibles. I apologize! I know it is childish and irrational, but I simply cannot help myself.

Somehow, someway, the Bradford Exchange is making a killing taking money from either the worst human beings on the planet, or the most ironic. They are the insipid funhouse mirror that reflects back all our attributes in the form of appallingly insulting artistic resin replicas. Trailer trash would be an accurate description of their audience if not for the fact many of their lotus-eating followers also live in McMansions. THEY ARE AMONG US.

This is the freeway in which our legacy of culture crashes head on with a drunk Dale Earnhardt, causing some ghastly pileup that stretches on for miles and miles. There amongst the smoldering wreckage you can see the mangled corpses of Pope John Paul II, John Wayne, countless marines and firemen, the New York Yankees, and hundreds upon hundreds of bald eagles and wolves.

It's a horrible sight to gawk at, but let's do it anyway! 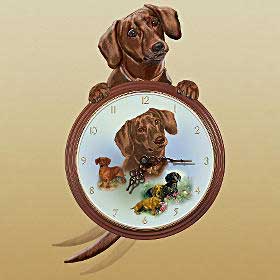 This item exists only in some magically detached fantasy land, like one of those mill villages that birthed John Edwards or in the home of one of Mike Huckabee's crackpot supporters, all eager and crazy-eyed to see the Constitution rewritten in the voice of Almighty God Himself. While redundancy is a staple of Bradford Exchange merchandise, usually they manage to avoid repeating the same exact image twice in a single piece. Like that picture of the Dachshund? Then you'll love that exact same image of the Dachshund repeated two inches below. I guess these guys are suffering from a shortage of Dachshund obsessed artists. At least they can always count on that Blaylock fruitcake to continuously paint an endless assortment of eagles in-between frantically masturbating the flesh off his limited-edition replica penis. If this clock had John Wayne, cops, firemen, the Confederacy, marines, wolves, dragons, or the aforementioned eagles instead of Dachshunds, there would be at least 8 extra unique designs plastered all over the place. Also the clock hands would be miniature swords emblazoned with tiny paintings of dragons spitting fire on some poor knight's shield.

All of this tells me one thing: There is a massive vacuum in the world of Dachshund artists. If you can paint Dachshunds, then you can easily become the next Ted Blaylock or Thomas Kinkade. Just whip out your paints and start obsessively doodling Dachshunds nonstop. With any luck, you might even go nuts along the way and become a modern day Louis Wain. 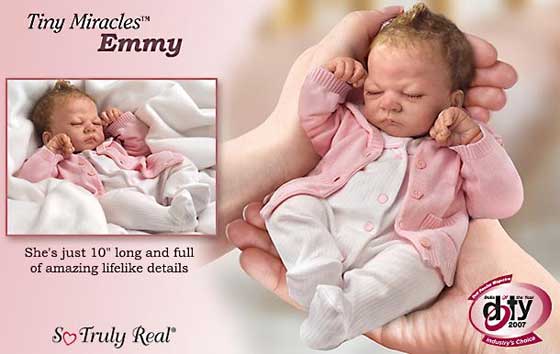 WHY ARE YOU SO FULL OF HATE??Let's take a moment to depart from the usual fodder and look at this seriously awful baby. Aside from being genuinely creepy looking, she certainly looks like one bitch of a baby. I know it's wrong, but I kind of want to smack this fake baby upside the head. And you know what? I think we can all agree that this fake baby looks like she deserves it.

What tormented mind sculpts some tiny fake baby that looks this pissed off? This is sort of like the fake baby version of that ridiculous Clive Barker line of Todd MacFarlane toys with all the evil S&M monsters. Is it not depressing enough to spend your life sculpting horrific baby replicas for complete and total nutcases that you also have to go the extra mile of making them look angry?

At least my homeboy Michael The Little Slugger So Truly Real Lifelike Baby Doll puts on a smile. That little guy is so happy that it looks like he just figured out how to crap up actual cartoons in his diaper. I've honestly never been that happy in my entire life, and I'm not even a dumb baby.