Another failed operation.Everyone's favorite animal-rights activists are putting out a call for ideas on their web site. Anyone who follows their wacky exploits in the news should know by now that PETA has the worst fucking ideas ever. I mean most people agree that animals deserve a fair shake, whether or not they deserve it to the extent PETA thinks they do, but PETA has a long track record of doing the most insane and worthless shit in an attempt to get their point across.

Here are just a few highlights:

I think it's pretty clear why they're hard up for ideas. They've been at this "make everyone hate animals by pissing people off" game for a really long time, and they are just running out of steam. Since I'm a big fan of animals I figure it would be a great time for me to pitch in and offer up some hot suggestions for them straight out of the proverbial skillet of my brain. Thankfully all of you helpful readers can offer up some suggestions as well, because they have a handy FORM on their web site. 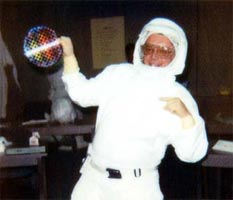 Watch out for the vampire bats chumly.The cosmetics industry is one of the most notorious offenders when it comes to the exciting high-stakes world of animal cruelty. From testing eye shadow on skinned ferrets to subjecting rabbits to high-pressure lip stick applications that crush their faces, companies like Proctor & Gamble have a long way to go before they get the PETA seal of approval. To help get them straightened out I've put together a little PETA mission that might just convince P&G to knockoff the animal cruelty and get their act together.

The first part of the operation will be to dress a team of PETA commandos in rabbit suits; these can be easily procured from any local furry dealer and every PETA mission requires someone to be dressed as an animal. They will break into a P&G makeup facility and release several sacks of vampire bats. When the lab technicians enter the lab the next morning they will find all the rabbits reduced to withered husks and the rafters overrun with blood-bloated vampire bats. Contrary to popular belief vampire bats aren't actually vampires in the sense that they can turn into people and wear capes, they only have one alternate form and it is that of a dire wolf. So when the scientists walk in and say "oh my god, look at all those vampire bats", the bats will turn into dire wolves and fall from the rafters crushing the scientists. Everybody wins! 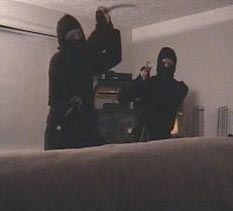 The last thing a cow mill worker will see. KATANA!Sure, PETA did the whole "hunting vest on deer" thing to try to fuck with hunters, but that was small potatoes, everyone knows that the great majority of meat consumed in the United States comes from cow mills. Cow mills are like puppy mills only instead of breeding puppies as pets, they breed cows to feed into some giant machine that spits out steak and ground beef. I think it sounds magical, but animal rights activists think differently, so I figured I would help them out.

The cow mills can't monitor their cattle all the time but it would still be almost impossible to free all the cows. Instead I suggest interdicting one of the cattle shipments and replacing all of the cows in the shipment with some sort of robotic cow or perhaps ninjas in cow suits. You can take all the poor cows and turn them loose in the wild like at a lake or an interstate rest stop or something, I don't really know where wild cows live. Then the robot/ninja team infiltrates the cow mill posing as harmless cattle. When they get ready to give them a shot with the bolt gun and chuck them into the cow to meat magic machine, the reveal themselves.

If robots are used their cow heads will come off like skin off the face of the Terminator and they will start shooting a shotgun at the people running the cow mill. Possibly they might be equipped with some sort of missiles and grenades too, I'm not sure, I don't know robots that well. What I do know are ninjas and if the infiltration team is ninja in nature then when the old butcher boys come calling the ninjas will start throwing shurikens into their eyes, tossing smoke bombs, doing crazy back-flips every where and cutting anything in half other than ninjas and maybe some of the real cows.

There is also the obvious potential to disrupt the consumption of animals at the retail end of things. Japan has recently brought us a number of groundbreaking technological advances that might prove useful; all we have to do is pry microchips out of some 8 foot tall rubber Gundam Wing sex toys. These "interactive sex chips" can then be inserted into Boston Market's line of delicious submarine sandwiches, where they will attempt to engage anyone who purchases one in an awkward sexual conversation. Here's how a normal scene at Boston Market might play out.

Sandwich: Not half as of delicious as you are, the beefcakes.

Customer: What the hell? My sandwich is talking!

Sandwich: Why don't you put your thing in my mouse.

Customer: In your mouse?

Customer: Wait, transform into what?

Sandwich: Activate Gundam attack! You are so sexy sailor put into the soup with these guys.

Sandwich: Why don't you sprangle on my face?

Then the customer develops deep psychological scars relating to submarine sandwiches and hopefully meat. Although they might just turn into a furry, I really don't know what sort of trauma creates those people.

Those are my horrible ideas, but let PETA know that you're putting your brain to solving the animal cruelty crisis. Sure, there are other problems in the world, maybe other problems that might be more important, but can you think of any other problems that have a gullible group of wealthy cretins willing to make fools out of themselves? Scientology doesn't count.