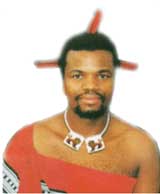 WELCOME TO SWAZILAND I AM KING.What is this hogwash!

Swazi king waits two weeks for wife No. 12 - Swaziland's King Mswati III took an 18-year-old former Miss Teen Swaziland finalist as his 12th wife during the weekend, barely two weeks after marrying his 11th, media in the tiny African kingdom said. Nothando Dube was selected as Mswati's fiancee after last year's Reed Dance, an event where thousands of maidens dance bare breasted in honor of the Queen Mother and where Mswati has chosen wives in the past.

This is an outrage! I am KING! KING MSWATI III! I do not have to stand for such insubordination from trash rags like this "CNN!" I will find the vagrants, I will find the miscreants, I will find the foul-mouthed heathens to spread such vile lies and I shall grab their lungs of their throat by my mighty hands and squeeze the clear and runny fluids from their breath tubes like a biscuit cone full of ripe caterpillars! I have married myself to a 17-year old stunning beauty, which the CNN reports incorrectly as 18 years of age. THIS WILL NOT STAND! I shall imprison these vagabonds from this CNN for taking a year from my beautiful wife's lifetime and furthermore I shall now divorce her and marry a seven year old who is immune to the slings and arrows of such a lying, hurtful media! I THEREBY ACCUSE THE CNN MEDIA OF PEDOPHILIA. 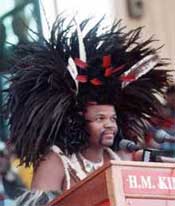 HELLO LADIES WANT A DATE ha ha ha I am just kidding I am married for now!

I have married many women because I have not yet to this date found a woman perfect enough to become my Mrs. King Mswati III. I have found fault in all my wives so far! Many of their faults revolve around the fact that they no longer have heads anymore. Ha ha I am just kidding but seriously I am not kidding.

WIFE #1 - ADAMA - My first wife! I shall always remember her! That is what I used to say until I forgot about her. I do not recall why I divorced her but I think I was young and naive at the time and like many immature young men, suspected she could transform into a unicorn.

WIFE #2 - MAKEMBA - I caught her holding a baby at a nursery. Then I remembered she resembled the woman who stole a baby in the Lifetime Network movie I saw entitled "Born Too Young." Baby stealing is the most terrible crime in the kingdom! I sentenced her to death for being involved in such a horrible thing, and then sentenced Makemba to death as well.

WIFE #3 - CHIKU - Threw out a stack of my royal decrees that I had marked with a red Snoopy stamp reading "TRASH! PLEASE THROW OUT!" in order to trick anybody who might try to break in to my bungalow and kidnap my kingdom away from me. I told her many times "DO NOT THROW OUT MY ROYAL DECREES" but she did not hear me because I told her long after I divorced her!

WIFE #5 - ZOLA - I got into a quite fierce argument with her father. I asked him "do you want me to cut off your head with gardening shears?" and he answered "no" and I disagreed. SUCH RELATIONSHIPS DO NOT WORK OUT AND YOU DO NOT HAVE TO PAY FOR OUTSIDE COUNSELING TO DETERMINE THESE THINGS, TRUST YOU ME!

WIFE #5 - MARGARET F. KINSLEY OF BALTIMORE - Discovered online. The relationship ended when I learned she was not who she claimed to be; HER LEVEL 43 NIGHT ELF WAS ACTUALLY A DWARF AND MY KINGDOM DESPISES SUCH DECEIT! I ordered her summary execution, but Maryland did not respect my wishes. THUS MY LONGSTANDING FEUD AGAINST BALTIMORE BEGAN.

WIFE #6 - SEKAI - Lost the youthful vigor and innocence she had when I originally married her. NOTE TO SELF: ISSUE A ROYAL DECREE MAKING IT ILLEGAL TO TURN 16.

WIFE #7 - MARGARET F. KINSLEY OF BALTIMORE (again) - Attempted to make the long distance relationship work again. MARRIAGE WAS DESTROYED WHEN I DISCOVERED SHE WAS USING THE ROYAL CREDIT CARD TO DOWNLOAD CELLPHONE RINGTONES.

WIFE #8 - NALIAKA - Suspected of spreading dissidence during my royal speech regarding the importance of proper pet care grooming. THE ROYAL CAT EXPERIENCED SEVERE TRAUMA WHEN EXPOSED TO HER COOKING. My Powerpoint presentation was ruined and my reputation amongst the peasants was tarnished until I promised to give them more AIDS.

WIFE #9 - LOIYAN - At our wedding ceremony I heard the sound of crickets but it was not night time! Clearly she was a witch so I ordered the entire wedding stage burned to the ground while all the guests screamed in horror. They were still traumatized by my mishandling of the royal cat.

WIFE #10 - MARGARET F. KINSLEY OF BALTIMORE (again again) - She convinced me to give the marriage another attempt "for the sake of the children." Then I discovered we had no children together because there is no command to adopt children in World of Warcraft! ONCE AGAIN A WOMAN ATTEMPTS TO TAKE ADVANTAGE OF A MAN IN THE ATTEMPT TO RULE ALL OF SWAZILAND AND AZEROTH!

My kingdom shall rule this entire world, all 600 acres of it. I have the resources to bulldoze and irrigate anybody who stands in my way. We have the trained commandos and rusty sharp knives to make this happen. Under my rule, over 34% of the population has contracted HIV / AIDS! That is a 32% increase since Prince Sozisa Dlamini's rule! MY SCIENCE ADVISORS SAY HIV / AIDS IS AN EXOTIC SPORTS CAR AND IF ONLY WE COULD DETERMINE A WAY TO EXPORT THIS TO NEIGHBORING MOZAMBIQUE, OUR KINGDOM COULD SPREAD LIKE MY FAVORITE EPISODE OF THE TELEVISED SHOW "STAR TRACK," WHERE THE OIL CREATURE ATTACKED THE LESBIAN SECURITY OFFICER! GOD BLESS YOU GENE RODDENBERRY. 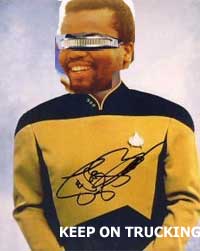 Hello ladies I can see your under things.

KING MSWATI'S NEW ROYAL DECREE #3 - Appoint official oil monster in charge of devouring lesbians! DO NOT HIRE OUTSIDE THE FAMILY! THERE WILL BE NO IMMEDIATE MEDICAL BENEFITS.

I have been informed there is fighting and unrest amongst the citizens of Hhohho. I did not know such a location even existed! What is this "Hhohho" and how do we expel it from our kingdom? I propose a trade of Hhohho and Lumbombo for the area known as "Akron, Ohio." I have been contacted by their tourism board on multiple occasions and do believe it's a land of limitless wonders which can be tapped to provide 37% more HIV / AIDS to our remaining citizens. Swaziland's Official Advisor of Country Swapping has suggested combining Hhohho and Lumbombo into location named "Hhohhobombo." However I must consult the Official Advisor of Medical Sciences to be sure doing such a thing will not give the residents vowel cancer. Ha ha ha ha DO YOU NOT GET IT? VOWEL CANCER! THIS JOKE SHALL FOREVER BE KNOWN AS THE OFFICIAL JOKE OF HHOHHOBOMBO AND SHALL BE REPRESENTED BY AN EAGLE CLUTCHING A CORN BABY IN ITS STEEL TALONS. THE EAGLE WILL BE AIRBRUSHED ON THE SIDE OF THE ROYAL VAN.

KING MSWATI'S NEW ROYAL DECREE #4 - Arrest any advisors who mention Hhohho. MUCH LIKE THE LESIONS ON MY ANKLE RESULTING FROM THE ATTACK OF THE LIQUOR CABINET LAST YEAR, IT TOO SHALL VANISH IF I IGNORE IT.
KING MSWATI'S NEW ROYAL DECREE #4a - Outlaw Booberry cereal. That ghost is staring at me with his panty eyes and it is making me quite furious and uncomfortable in my nether regions.

I have been informed by the Official Advisor of Telling Me Locations of Things Larger Than My Comfortable Chair that my kingdom is located in Hhohho! I now retract my previous statement and shall now combine Manzini and Shishelweni to form a new region named "Doctor Octopus" to capitalize on the success of America's "Spiderman 2." We shall print up hundreds of the tourism flyers convincing Americans to travel to Doctor Octopus and enjoy a family vacation on the Plains of Mud. We must create a series of family friendly attractions to bring in tourists and their fat purses! We must create colorful and vibrant slogans to attract money makers to Doctor Octopus. I have devised the following: 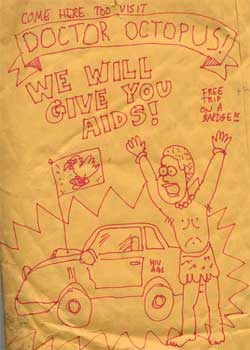 THIS IMAGE IS COPYRIGHT 2005 KING MSWATI III Inc.! If you steal this then I shall throw you into my hedge maze! My hedge maze is two straight lines of bushes that lead to a cactus. YOU WILL IMPALE YOURSELF ON THE CACTUS OR ELSE WE'LL SHOOT YOU!

Many ignorant enemies of the kingdom have given me hardship regarding my policy to outlaw all political parties. THIS WAS FOR THE GOOD OF THE ENTIRE COUNTRY! If it were not for my kind and generous decisions, our entire country's fate would be determined by the tyrannical My Baby's Daddy Party and the Organization of People With AIDS. DRASTIC TIMES CALLS FOR DRASTIC MEASURES PEOPLE! I am allowing the following parties the permission to form:

THE PEOPLE'S PARTY OF OH GOD KING MSWATI III IS AWESOME
THE COALITION OF PEOPLE WHO HAVE AIDS AND QUITE FRANKLY LOVE IT AND WOULD LIKE TO EXPORT IT TO NEIGHBORING COUNTRIES LIKE MOZAMBIQUE AND AKRON, OHIO
The National Party of Birthday Cake and Soda Every Day for Several Thousand Years
A GROUP OF GUYS WHO HATE BALTIMORE

My love for my country is like my love for women: there is a lot of it to go around and it often results in somebody getting beheaded! Ha ha ha that does not make any sense. But seriously come visit Doctor Octopus, you will enjoy all your moments of it, thank you for your time and AIDS.

THIS NONSENSE IS BONKERS