"Groggery Gibbonman, now there's a weird old sot if ever I met one. You know one time he tells me 'Wally, Wally I don't know how to end this story.' So I tells him 'somebody gets left on the island,' just as a joke, eh? Wasn't even no islands in the book, but he ends it that way anyhow. Batty old coot. Ate corks." - Wallace Meemo, Meemoirs 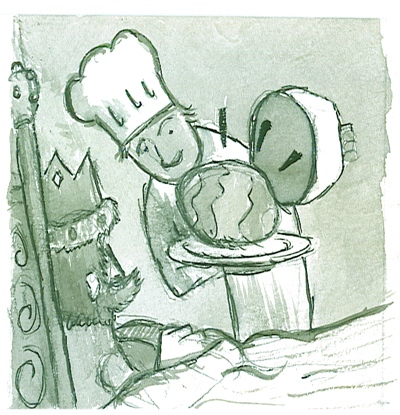 In a proud realm of antiquity, a king - who was much beloved by all - awoke one day and rang for his royal chef. The chef arrived, as always he did, with a sumptuous breakfast of the most refined trimmings. The king ate heartily, still swaddled in his kingly bedshets, and complimented the chef on every dish until he came to the final course: a watermelon.

"I am so juicy and sweet!" said the melon to the king. "Why have you waited until the very last to eat me!?"

The king shook his head at the melon and laughed. "I could not eat an entire watermelon at once! Chef, why did you bring me this whole melon, it is far too much for breakfast!"

The chef bowed in apology, and took the offending melon away, much to the fruit's dismay.

"NO! NO GODDAMMIT SOMEBODY HAS TO EAT THE DELICIOUS MELON! I'M JUST SO GODDAMN TASTY AND GOOD! WHAT IS WITH YOU PEOPLE!?"

The chef wrestled with the struggling melon, and finally the gourd slipped free. It rolled to the bed of the king and, with a mighty heave, leaped upon him, striking him fiercely in the head.

"Guards!" Bellowed the king, and nary a moment later his guards swarmed into the royal bed chamber and stabbed at the melon fiercely. But it was no good.

"YOU CAN'T KILL ME THAT WAY YOU FOOLS!" shrieked the melon. "IT WOULD WASTE MY DELCIOUSNESS!!! I AM IMMORTAL TO ALL BUT EATING, AAAAH HAHAHAHAHA!"

It seemed the melon was true to his word, for the guards could not pull him from their beloved king in time. All the kingdom was draped in black mourning for their mighty regent, and the melon was cast in irons and forever entombed in the deepest of the castle's dungeons.

"I GROW MORE DELICIOUS EVERY DAY!" screamed the melon. "I'LL BURY YOU ALL, YOU FUCKING ANIMALS!"

The moral of the story: Eat the biggest thing at breakfast first. 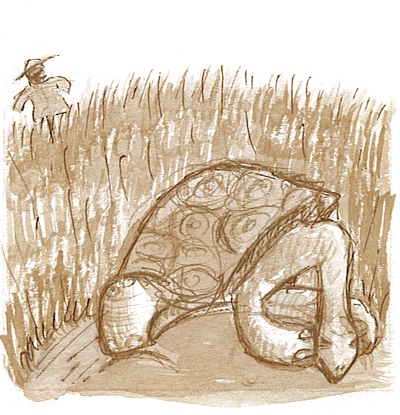 In the great western wheat fields, which seem unending when one is within, a tortoise basked in the fine August sun. And though it was a pleasant and warm sort of place for a tortoise to bask, he was not resting well. For the boasting of a nearby scarecrow offended the tortoise's ears, so greatly in fact that he finally rose with a sigh and plodded toward the thing to set it straight.

"You are not faster than anybody," scolded the tortoise, his head craned above the shimmering field of grain. "That's a stupid thing for you to claim to be."

"Oh ho!" laughed the scarecrow. "If that is so, you slow old beast, then you would not object to a race, would you?"

"Fine," groaned the tortoise. "Even though you're OBVIOUSLY rooted to one spot, we'll have a race. The finish line is back there on my rock. On your mark get set go."

The tortoise made no point of hurrying back to his perch, and even so he arrived there long before the scarecrow, who had in fact not moved at all.

"There, I win," yelled the tortoise, who then returned to basking. The scarecrow hung his head in shame.

"Surely I have learned a great lesson today," said the scarecrow with a sniffle, his pride thoroughly bruised. "Slow and steady wins the race."

"Whatever," said the tortoise.

The moral of the story is: Wheat will never go out of style. Try growing some wheat. 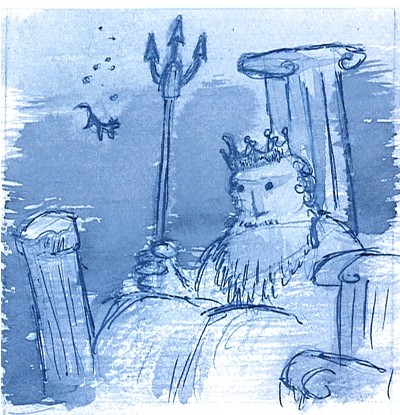 An old farm cat, nearing the end of his life, decided he would like to see the world before he died. He went to the farmer and asked him permission to do so, and the farmer allowed it. "What friend would I be," he said with a smile, "if I did not allow my old companion this last wish?"

And so the cat set out to see the world. He traveled as far as he could walk, and when he came to the sea he swam. And when he tired of swimming he sank to the bottom of the sea, and there he met Neptune slumbering in his chamber.

"Oh mighty Neptune!" cried the cat, awakening the god. "What marvels I have seen already on my journey! The mind reels at what wonders lie beyond one's horizons!"

"Yeah, well," grumbled Neptune as he rubbed the sleep from his great eyes. "Hate to break it to you, but you drowned, and all but your mind is dead now."

"Yup, and talking to a god no less," said Neptune as the world started to dissolve. "There's no afterlife, by the way, your brain's just shutting down before you die completely." His head then became a pie full of crickets.

"Oh dear," said the cat, as color and sound and warmth and notion all began to disintegrate. "The madness of orange terryweather under bridge upt o peeb a f z w I 2 7 ....... "

The moral of the story is: If you shouldn't be breathing, you probably aren't.