Only Attractive People can Shop at Abercrombie & Fitch 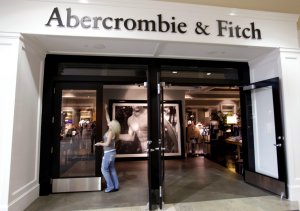 Abercrombie & Fitch sells clothes for attractive people, people for whom shopping is the closest thing to pain, because it's the only activity in their lives that doesn't involve sex with supermodels or driving European muscle cars. To appeal to these people, the store tries to make its image synonymous with attractiveness. Hence its policy to ban unattractive people from buying its merchandise.

Outside Abercrombie & Fitch's entrance is a poster of Rihanna that says "You must be this hot to enter." The poster smells like sex, cologne, and gym lockers, scents that trigger the fight-or-flight response in most unattractive people and make them run away. The store has two doorways, one below "Abercrombie" and one below "Fitch." The "Abercrombie" doorway is blocked by an invisible death field, because it's the one unattractive people are more likely to go through, because all their lives they've felt like Abercrombie, the uptight straight man to the good-looking, fun-loving Fitch.

The store's interior is dimly lit and divided into rooms to resemble a house party, so that unattractive people, who have never been to house parties, will become disoriented and lost. Wandering the store, stared at by posters of shirtless men a thousand times handsomer than themselves, the unattractive people will eventually commit suicide, or be killed by the lasers that shoot from the men's nipples. The lasers are triggered by a sonar system that uses the beat of the dance music on the speakers to echolocate fat or asymmetrical bodies. 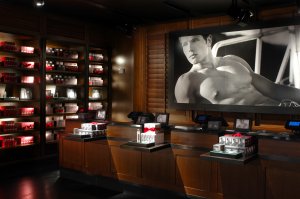 Also, the sales floor is made of trapdoor tiles that detect obesity or an unconfident gait. The unattractive person slides down a chute into a cell lined with TV screens, showing the time they walked close enough to an attractive person to make the attractive person's hair flutter slightly. Realizing this was the highlight of their life, the unattractive person cries, their tears flowing in two parallel streams into the drain on the floor, forming an "=" sign between the person and the sewer.

Abercrombie & Fitch's most popular shirt is made of a psychic fabric that displays whatever the wearer is thinking (the most common image is a cross section of a frat party, twisted into an infinity sign, set against a background of women's underwear). Unattractive people are especially forbidden from trying on this shirt, because their self-consciousness turns it into a grotesque hall of mirrors, showing a less attractive version of the wearer, wearing a shirt showing an even less attractive version, and so on. As a safeguard the shirt is sprayed with a chemical that ignites if it touches acned or unmoisturized skin. Additionally, the shirt rack has a scanner that counts the number of contacts and sexts on customers' iPhones. If the number is below average, the rack grows spikes and spins around like a saw. 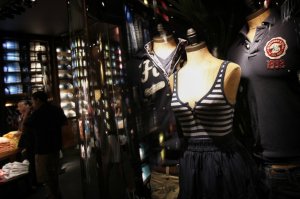 If an unattractive person somehow gets their hands on the shirt, dodging the lava pits and robot mannequins that throw the ampersands from their A&F t-shirts like shurikens, they'll fall victim to the store's mirrors, which explode if they display unattractive people, shooting shards of glass into the people's faces. These mirrors were initially a problem, as unattractive people staring longingly into the store would sometimes trigger them, maiming customers. But this was fixed by covering the windows with shutters, protecting the stores from even the reflections of unattractive people.