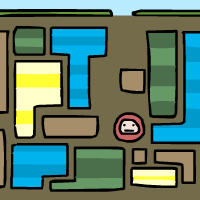 I returned to the temp agencies multiple times, seeing people getting hired despite their nicotine stained windbreakers, missing shoes, and giant bags with dollar signs on them clearly full of stolen money. But after a few more weeks of visiting agencies and taking computer literacy tests with problems like "maximize a window without shutting down the computer and without filling the hard drive with child pornography," I had struck temp pay dirt. I had an interview at a bank, which promised to give me ten dollars an hour to do bank related things (except armed robbery).

In my town, ten dollars an hour is a lot of money; Youngstown, Ohio, once a gem of the steel belt, is now known as "Home of the World's Most Rottingest Buildings." And, fittingly, I had the chance to work in the basement of a 100 year-old skyscraper. Would there be a Duck Tales-esque money bin to swim in? Would I find a secret closet of anti-Irish propaganda? No, because these are stupid questions. But when I walked into the lobby of the building, I clearly saw an old, bronze sign welded to the wall which read, "Newsboys, peddlers, and solicitors must keep out." I quickly chugged the remainder of my cocaine-laced cure-all potion and went down to meet the boss.

She was a nice middle-aged lady, and smelled like the flowery potpourri perfume all women begin to cloak themselves in as they close in on the age of 50 in order to keep away rapists and grandchildren. I thought I was going in for an interview, but it turned out that I was actually hired, and was technically starting my first day. She asked me if I would be able to work immediately, and that's when I got my first Dead Zone flash of panic. Somehow I knew all along how this was going to turn out, but I couldn't stop myself completely. "Um... yeah, I have a few errands today, but tomorrow is fine." The small, wet naked child representing my freedom was running towards a Slip-N-Slide while holding upwards-pointing scissors, and I could only watch in horror as the tragic events played out. The rest of the day was spent quietly mourning the death of my free time (drinking). 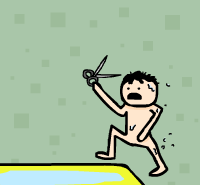 Soon, I was in a massive, cream-colored cubicle, awaiting instructions on what to do next besides quietly fart into the plush seat of my office chair. I don't mean to brag, but I have a work ethic - not because I enjoy slaving away for some vague purpose, but because doing stuff at my job prevents co-workers from hating me. Also, keeping occupied helps me forget that my hours of labor all contribute to one CEO's mission to light his illegal cigars with $1000 bills instead of just $100 bills; it's the principle this country was founded on. Someone working their last week at a job before leaving for a competing business has none of this "work ethic" of which I speak. This is exactly the type of person who "trained" me, and by "train" I mean "act like a complete dick whenever I ask a simple question, all while tagging all responses with 1000 variations of the word 'bro.' "

During the first week I took the initiative to train myself. Left alone all day, I pored over product manuals and waded through an endless sea of acronyms. After 32 hours of work, I finally figured out my job had something to do with money. This was the first step. A search for my supervisor to confirm this fact revealed that he was gone forever - and without so much as a farewell "Broenheimer!" Who would patronize me now? 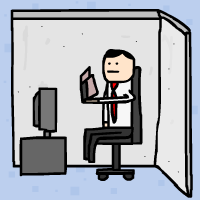 Let me make one thing clear. At this job I did absolutely nothing. And when I say this, I don't mean it in a cutesy, "Oh, ho! My job is cushy!" way. I mean it literally. If you looked into my cubicle during any given workday and didn't know any better, you'd swear I was an unpaid Wikipedia researcher, because all I did was browse it and the handful of sites the office computers didn't block. This task was coupled with hours of trying to figure out how to sleep while sitting up. Pooping at work turned into locking myself in a bathroom and playing marathon sessions of Mr. Driller on my cell phone (which has many correlations to pooping, if you think about it). In the face of no supervision, I didn't know what to do. While my co-workers spent the minutes of free time they had idly bouncing balls off the walls of their cubicle like The Cooler King, I was bringing in and finishing multiple novels in the course of a workday. When co-workers would notice my behavior, they'd raise an eyebrow as if they were thinking, "Hmm. A book. Now where have I seen one of those before?" But even though books are a magic train to the perverted world of personal imagination, they could not help me escape the crushing boredom that felt like carbon monoxide poisoning, except without the sweet release of death at the end.

This made it all the easier for me to notice the depressing office environment, where the sense of quiet desperation in the air is more noticeable than the constant hum of the fluorescent lights. To be able to communicate in an office you need a comprehensive knowledge of Lost, Desperate Housewives, American Idol, and Grey's Anatomy, as 99.9% of all awkward, forced office conversations are about these programs (the other .1% consists of sexual harassment and the noises made by at-work blowjobs). Clearly, I did not fit in with this group, and my feeble attempts to relocate Gilligan's Island plots to Lost all resulted in failure. "Hey, remember when that astronaut showed up and that fat guy hit the other guy with his hat and they wanted off the island?" I blame myself for not running out of there screaming on my first day after one of my co-workers decided to take a casual attitude towards work by turning on some awful FM radio station and playing a "guess the band" trivia game with classic rock. These people were turning my new job into a car ride with my step-dad.