An Adventure in Purchasing Pet Gifts 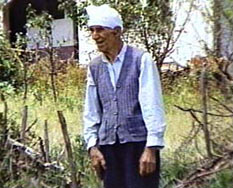 I met my girlfriend on the Internet, and when I first saw her in person my fears were justified, she was a 69 year old man, but our love endures.My mom used to buy Christmas presents for my family's dogs and cats, which even at the time I thought was the most retarded thing ever. She would put those plastic balls with bells in them in wrapping paper under the tree and after everyone had opened their presents, eaten, and argued until their faces were red, someone would angrily open all the pet gifts and hurl them violently at the cats and dogs.

Someone Angry: Here, take your goddamn plastic ball with bells in it!

Cat: (Hisses and runs away).

Then it was back to the arguing, but that's beside the point, I've already gone over the tumultuous Christmas times in the Parsons house. Although I still fail to understand my mother's rationale in buying the pets presents, I have now come to realize at least one reason for buying pets presents; win their affection. My LOL AOL girlfriend has two cats, and while both seem to like me, they don't like me enough for my tastes. I want her to walk into the room with me and the cats ignore her silly ass and sit on my lap. I mean come on, what can be more rewarding than stealing your girlfriend's pets from her? Not kino, I promise you that.

So when I went shopping a week or so ago to pick up a couple little gifts for her, I also picked up a couple little gifts for her cats. It was easy to choose something to get for her. She communicates with me, I know what she likes and doesn't like, I think I know what she enjoys, and after the incident with the multi-attachment pleasure pack, I know what to avoid completely when buying her a gift. Her cats on the other hand are a completely different ball of wax. Not to say they don't communicate, they each definitely have their distinct way of making clear their feelings, but when it comes to shopping I don't speak their language. This puts me in the uncomfortable position of having to use my shitty observational skill and fucked up loopy memory to figure out what sort of pet gifts her cats might enjoy. 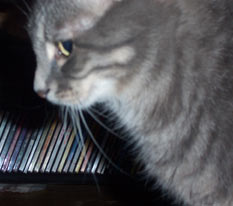 Shadow StalkerReal Name: Duncan
Code Name: Shadow Stalker
Blood Type: Originally A, AB after rejuvenation from cryogenic suspension
Means of Communication: Shadow Stalker will vanish as surely as a ninja whenever I arrive in Michelle's apartment. Occasionally I might think I see him when I'm poking around her bedroom closet and invading her privacy while she's in the kitchen, but he is adept at various visual deception techniques. Shadow Stalker makes his presence known indirectly; he coats every single garment of clothing I've brought with me in residual cat hair. This is similar to ghost ectoplasm and, although it is far less disgusting, it is much more difficult to get off. 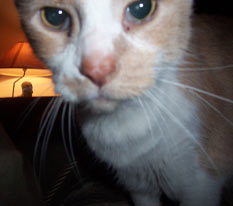 I put together these little profiles on her cats for my use in gift purchasing and I stretched out on the bed of my Saigon hotel, watching the fan blade on the ceiling rotate slowly above me. Been there a week now, waiting for a mission, getting softer. Every minute I stayed in that room, I got weaker, and every minute Charlie was squatting in the bush, he got stronger. I knew I had to do something decisive or my growing need to return to the jungle would kill me, so I got in my car and humped it six clicks to Wal-Mart, where the cat toys were.

There is a fine art to buying gifts for animals, a school of art as real as impressionism or surrealism, and one that I am completely uneducated in. I found myself in the animal food aisle, my thoughts playing out to the background music of burbling fish tanks and inane chatter of people buying crickets to feed their pet lizard. I stared in bewilderment at the pet snacks, pet foods, pet chew toys, and catch toys, and squeaking squawking hellish rubber toys arrayed before me. There were so many choices for me it seemed and none of them jumped out at me.

They all look different, but they're all so similar.The more I looked at the cat toys the more confused I got, so I ended up just basically grabbing something that seemed to have the basic ingredients for cat fun. Now currently there are only a handful of different types of cat toys, but a wide variety on each of these basic themes. There are cat squeak toys, which are basically balls or something similar, often mouse-related, that squeaks when you squeeze it. There are stuffed toys, also similarly designed to the squeak toys but these many times will have a certain quantity of catnip inside of them. If you're not aware of what catnip is, it's essentially a feline version of ecstasy that turns your cat into a raver for about fifteen or twenty minutes. It gets really excited, happy, and flips out, rolling around, running like crazy, and just basically acting nutty. If there were cat-sized glow sticks I'm sure they would be waving them around somehow.

There are also "toys on strings" which usually consist of a stuffed or squeaking toy attached - you guessed it - to a string. Cats seem to really get a kick out of things that dangle for some reason. If Hollywood produced hit movies for cats the number one highest grossing film of all time would be a series of strings dangling off of a table, undulating slightly in a breeze, while bird sounds play. Another activity that cats really enjoy is tearing the fuck out of all kinds of shit with their claws. Furniture, records, people, they don't care, they just get kicks out of sinking their claws into it and dragging furrows through whatever it is. This makes it extremely unsurprising that there are also cat scratching posts, which are basically a log covered with a carpet sample attached to a base so it doesn't tip over.

All of these toys involve the cat slapping something around with its claws, which begs the question; why isn't there a wider variety of cat toys? I'm not just talking about more materials to make mice on strings out of. Cats are like people basically, smaller and furrier and probably less intelligent, but they can't enjoy just fucking slapping toy mice and bite little rubber dogs that squeak. They need a variety of toys with which to entertain them, and I am the man to give them their toy emancipation.

The Cat Car: Cats may not joy riding in cars like dogs do, but they still deserve some wheeled transportation of their very own. Since cats often play hard to get in a car the Cat Car comes with two "safety" belts to fasten them in place and an easily replaceable duct tape flap to secure their head to the seat back. That way they don't get whiplash when you roll them down a steep hill.

The Cat Jet: Very similar to the cat car, but still in the refinement stage. I have to find some foam padding or something that will let the cat inside survive a 650mph impact with an interior structural wall.

The Cat Helicopter: This isn't at all like the cat jet or the cat car. I got my idea from those toys on playgrounds that are basically a raised disc that spins while kids hold onto bars. Since cats aren't any good at holding onto bars they sit inside recessed cylindrical compartments (up to eight cats, great for cat parties) while a 80hp car engine rotates the disc. I'm working on attachments to siphon cat vomit automatically out of the cylinders.

The Mouse Launcher: This toy combines two time-tested toys, the stuffed mouse and the Saturn battery firework. Take 16 paper-towel-roll sized tubes and insert 16 catnip-filled stuffed mice on top of a charge of propellant. The prototype I've worked up has a fuse but in the final production version I want to be able to electronically launch volleys of stuffed mice for your cat to play with. The propellant also has a tendency to turn the stuffed mice into fireballs, so I may need to look into pneumatic propulsion for them.

Ultimate Cat Toy: The UCT is a scientific evolution combining design features from every proven cat toy into a single spherical package of total cat glee. Like any fine recipe I started this dish off with a tennis ball dipped into epoxy, which I then rolled around in a bucket full of stuffed mice full of cat nip. I placed an equator of squeak toys around the outside and gave it a delightful north and south pole of yarn.

I think with this line up of awesome toys my new Internet startup shop Pets.com will have more than enough to keep cat lover's happy for years to come. I'm planning on really raking the money in so I've taken the liberty of hiring dozens of overpaid designers, a hundred fulfillment staffers, and I've dropped five million dollars on advertising. Pets.com is such a catchy and concise URL that I don't see how all this could possibly go wrong.