Despite repeated warnings from friends and enemies alike, I had digital cable installed about half a year ago. Now some of you out there might not be as "technically profusementasocionoligicable" as I am, so let me take a moment to explain the differences between analogue and digital cable. I will detail the history of television from the beginning, when most of it all started, and in the process completely avoid the topic of "analogue versus digital." This is because I am a piss-poor writer and have absolutely no clue what I'm talking about and I don't plan on changing my ways until one of you either murders me or forces me to watch "Halloween 3: Season of the Witch" until my head implodes from watching the flashing pumpkin graphic. 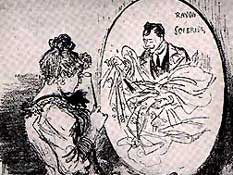 One of the earliest conceptual designs of television. No wonder it took so long to catch on; who the hell would want to watch that all day?

The idea of a television was first conceptualized sometime between the years of 1200 and 1899. They didn't know what to call it back then because nobody had invented it yet; luckily everybody was too busy fighting Indians or the British or the Hebrews or harsh climates to worry about naming the television. During this time period, the number of television channels was limited to zero. They didn't even have test patterns and even if somebody could've somehow invented the test pattern, nobody would be able to see it because instead of televisions they had horses and instead of cable boxes they had revolvers or arrows. Every afternoon after a family's father had returned from giving Native Americans blankets infected with AIDS, the entire family would cook up pots of dirt stew and sit around to watch the horse for three hours. Sometimes the dad would get sick of staring at the horse so he'd say "honey, change the horse" and then a new horse would be brought in and they'd stare at that for a while. The first family to stare at horses was the Neilson family, who rated white and dark brown horses much more popular than light brown or dead ones. Their unique rating system resulted in what we know today as "The Neilson Ratings," a series of numbers that represents how many people would rather be watching horses instead of staring at whatever godawful crap is currently on television.

Eventually humanity took a few basic science courses and some dead Irish guy (he wasn't dead at the time) named Joseph May discovered that light could be turned into electrical signals by using what they called a "photoelectric effect" but we now refer to as "voodoo." Some other people came up with some other ideas about television but nobody really cares much about them anymore because they're old and stupid and the people who invented them are dead.

The term "television" was first coined in the year 1900 by the Russian physicist Constantin Perskyi who was delivering a speech about cockfighting and accidentally slurred his words together to form this new, exciting, proactive word. His noble and ingenious speech caused various other scientists to start looking at potassium cells (which are now found in Flintstones vitamins) and triodes (the things that the cast of "Star Trek" used to shoot at space nerd Wil Wheaton and then claim that there was an enemy Chewbacca behind him which they said vanished after he turned around and didn't see anything).

The television manufacturing process really picked up in 1925 when an electrical engineer from Scotland named John Logie Baird revealed an invention which reproduced white letters on a black background. Everybody was really just incredibly impressed because it was like staring at an inverse newspaper and it's that kind of revolutionary thinking that has made Scotland the world power they are today. Although the whole "white letter revolution" thing was just incredibly wonderful and all, the world of television science ultimately had to wait until somebody could produce cathode-ray tubes, which occurred during the summer of 1933. RCA began building really silly looking televisions the following year, machines that were only capable of scanning only 120 lines at 24 frames per second, roughly the equivalent of many ATI video cards sold today. 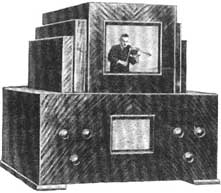 Some of the first television sets were simply empty wooden boxes with a little man playing a tiny violin trapped inside.

On March of 1935 the first television service was started in Berlin and was used to cover Bob Hope's 60th birthday. The next five years were marked by countries improving and one-upping each other with higher resolution, more frames per second, and shows that revolved around women wearing a lot of doilies, standing in one place, and singing about gardens for seven consecutive hours. The Singing Garden Lady was then replaced by the Guy Who Sits on a Stool with a Wooden Dummy show which only lasted a couple months, at which point everybody realized wooden dummies were scary and could possibly kill them in their sleep. World War II eventually popped up like a Wack-A-Mole target and slowed down the progress of television in Europe, but the electronic research done by the government during that time ultimately helped advance the design of the television. For example, the Army's radar screens used a complicated cathode-ray tube design, resulting in the manufacturing of consumer televisions that, when turned on, caused the cathode-ray tubes to lob incendiary grenades at the viewers. When everybody was done killing each other in the war, the major countries continued to create televisions that had more and more lines and frames per second until the television got so fast that it had to have a "TYPE R" sticker and a huge plastic tailfin placed on the back.

The world of color soon entered the world of television in the world of Earth around 1953 when RCA launched a line of televisions that were somehow in color. I'm not sure how they were able to do this, but if I had to guess I'd probably say Area 51 was involved. According to my research, absolutely nothing happened between 1954 and 1961, and if you ever have a history test you can quote me on that. I don't care what the question is, just answer "nothing happened between 1954 and 1961 claims Rich 'Lowtax' Kyanka" and then scan me a copy of your test so I can put it on my refrigerator with my Ziggy magnet. The years of 1961 through 1963 were marked by bitter quarreling between notorious French guy Henri de France and Dr. Waiter Burch of Germany who each had different ideas regarding how color should be transmitted. I don't know what their arguments were, but I do know they both had silly names, so we can safely assume that whenever they held a press conference all the reporters spent the entire time giggling. This somehow led us to where we are today with plasma screen televisions and picture-in-picture features which allow you to watch "Family Matters" while viewing "Step By Step" at the same time as you load your shotgun and point it up at your head.

Now despite all these wonderful accomplishments and gobs of history, we have somehow ended up with digital cable, a medium which not only makes transmitted images crappier in quality but also adds the benefit of taking twelve minutes to change from one channel to the next. I was snookered by the AT&T people to get digital cable because they dispatched one of their most accomplished and proficient ninja telemarketers to assault me into submission with pure idiocy. 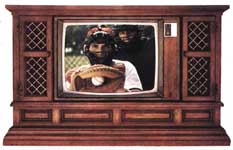 The televisions of the 1980's offered many technological improvements, yet only one channel and it just showed this guy catching baseballs.

I eventually gave up because my sense of extreme apathy manifested itself in a physical form and began to beat me in the head with the television controller. After the large, smelly, tattooed AT&T install C.H.U.D. came by and used his roast beef-sized hands to plug in the box, I began to realize all the warnings about digital cable were true. Let me put them into a list so I don't have to bother trying to string them together with coherent sentences:

The image quality looks like a VCR tape filtered through an Atari after your kid sister dropped it down a flight of stairs. During dark scenes you can actually see color blocks the size of packing crates.

There is some weird digital television lag that randomly occurs, causing the movies you're watching to start skipping frames and appear as if the characters have suddenly developed the power to teleport to nearby locations. And this just didn't happen during the time I was watching the movie "The Man Who Had the Power to Teleport to Nearby Locations" either, it happens on almost all shows.

There is a noticeable pause in between changing channels or doing absolutely anything involving the cable box or the television. If you're one of those weirdos who cycles through channels at the rate of 60 stations a second, you're going to be in television hell. Whenever I press the button to change the channel, I get up, make some popcorn, paint my deck, and then come back and wait a few minutes until it's successfully switched.

Ads are littered all over the place. It's insane. The channel display lineup has about 19 box ads all over the screen for all kinds of stupid shit. To top it off, the image quality is so crappy that I can't even read the phone numbers of the advertised products, not that I'm really interested in buying a "Biodome" sweatshirt.

So here we are, over a hundred years after the initial concept of television, and the only thing that has really changed is that The Singing Garden Lady station has been replaced with 900 different channels that offer everything from black entertainment (it's just a pure black screen) to public access stations that feature a 14-year old kid screaming the word "CONGRATULATIONS" at a mailbox. At least in 1925 they could read the numbers and letters on the screen. The one thing we've got going for us in this day in age is the freedom to start an article based on the differences between analogue and digital cable, and then completely avoid the issue and write about something totally different. God bless America, USA #1, go team!