Get dow with your bad self.

Dow Jones and the Temple of Doom

In this fast paced capitalistic society, getting rich is the most important goal of all hard working Americans. It is also the goal of the other, lazier 98% of Americans like you and me. While national security briefly took precedence during that whole period a few months ago where we all cared about things other than gay jokes, Saved by the Bell, and gay jokes about the cast of Saved by the Bell, financial security has recently crept back into its throne atop the kingdom of American priorities. It did this with the stealth of a ninja and the power of a larger, more powerful ninja.

This Pie chart shows information about pie. How pie-ronic! Also, please kill me.

Before we even realized it, people who were hugging each other in patriotic unity were once again speeding, robbing trains, cavorting AND capering in an anarchic display of greed and the American way. The bottom line is that everyone wants to get a piece of the pie. Even anorexics love this pie because it is figurative, not delicious. Earning money isn't an easy thing though, as most of the world's hard currency was buried by pirates between the years 1605 and 1809, forcing us to print worthless paper money with pictures of worthless historical figures on them.

It takes a lot of hard, often illegal work to make money in this rough and tumble economy. Most of it also has to do with luck, as hard work and / or diligence has little to do with success. There are only about 5 ways to make any money in America today...

Being an attractive actor / actress

Being a talented musician

Being an untalented, attractive musician

Seeing as how I have no experience with being attractive or talented, and I don't know what the word dastardly really means, the rest of this article will discuss the fast paced world of the stock market. Hold on to your hats, because this is going to be a bumpy ride! In other words, stop reading this article now. 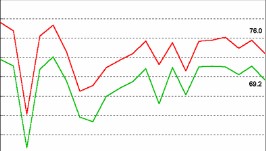 This Mountain landscape drawn in a first grade art class has nothing to do with the stock market.
If you're still with me, the first thing you should know about the stock market is that it's unpredictable. One minute you can be sitting there and the market is showing you nothing but love, next thing you know it's taking all your money, sleeping with your wife, and eating your children. As such, you should never lower your guard around the stock market. With this in mind, you should take your first step into the world of stock trading, which is hiring yourself a stock broker. A stock broker is a person who you entrust thousands upon thousands of dollars to and hope he doesn't blow it all on cocaine and hookers. This requires a certain level of trust, which is why most people go to brokerage firms they've heard of on television, because TV is always trustworthy.

Next comes the process of actually finding companies to invest in. This isn't as easy as it sounds, as almost the entire tech industry has collapsed in on itself like a card castle, or a real castle made of cards. Gone are the days when pompous, cappuccino swilling, beret wearing hip twentysomethings became millionaires by investing in companies that had no apparent function or purpose other than providing people with faster access to cappuccino and berets. These people are now all back living in their parent's basements, working at jobs which offer minimum wage and maximum humiliation. To protect yourself from a similar fate, invest in companies that provide things that all people need, such as tobacco and firearms. And avoid companies whose names start with "S" and end in "nowball.com", or else suffer the consequences. 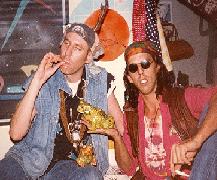 Buy low, and sell high! Haha, that's a joke because these people are smoking marijuana. How clever. Also, please kill me.It's important to note that while investing in larger, more stable corporations is safer, so is protected sex and driving sober. All three are for nerds. Real men, and fake macho robot men both invest in high risk stock. Sure, you have a greater chance of losing all your possessions and dignity, but you can pretend you're "Tough" by throwing your money at random stocks that no average man would have the balls to. When someone guarantees you success, scoff at them and place all your money in an up and coming Dutch company that only you've heard of. You'll see who has the last laugh!

Once you've gotten your investments in order and gone through all the above steps, it's time for the most important part of all: Praying to your dark lord Satan that these stupid companies you've put money into don't fail. This is pretty much where the pages I tore out of the library's "Investing for Dummies" book ended, so I assume at this point you make lots of money somehow. Exactly how that part works is a mystery to me. Maybe your stocks all get together and form some untalented, attractive boy band and begin a rigorous tour schedule in which they make millions of dollars for you, or hatch a dastardly plot to rob the First National Bank. Thinking about it, I probably shouldn't have written this article after all. I'm the last person who should be giving you advice on how to get rich, since I work for minimum wage and live in my parents' basement.