Another Festering, Pathetic, Diseased Year For Me to Live Through

Some of you "less stupid" dope freaks out there might have accidentally noticed... wait, forget that shit. If you're on the Intarweb right now and reading this computer screen, then you're just another drooling pusspuddle like the rest of the gutless sludgehogs who read their computer screens on the Intarweb. There's no chance that you'll notice anything except a jumbo sized, lard encrusted, greasy hotdog dangling in front of your bloated face, dropping chopped pig entrails all over the precious Dungeons and Dragons muumuu you're wearing so your parents won't mistake you for a giant lump of sweating pork that somebody mistakenly dumped off in their filthy centipede-farm basement. Well whatever, what I was trying to goddamn say was that it's yet another new fucking year and ol' Cliffy here ain't exactly the most thrilled hero on the planet because another year means another 386 days that I gotta put up with the shit that these fuckbuckets in Appleton City pull every goddamn hour of every goddamn day, not to mention your countless electric messages to me saying "WAH, CLIFF, PLEASE UPDATE YOUR COMPUTER SCREEN BECAUSE I HAVE NOTHING ELSE BUT RERUNS OF 'FUCK THE CARTOON MOUSE' TO LIVE FOR!!!"

But whatever, I decided to "make myself into a better person" by making a list of New Years Resolutions that I'm gonna do and shit so maybe I'll be able to impress that broad at the bagel shop on 119th Street. Yeah, I know what all you zitfaced losers out there are thinking, "wah, but Cliff, that girl is 73 years younger than you!" Well let me tell you something, land bozo: I don't fucking plan on marrying her, so that age shit doesn't matter, and you can go back to playing your Mario Brothers game until your thumbs fall off and you're unable to jack off to elf porn for the next month. So here are my New Years Resolutions: 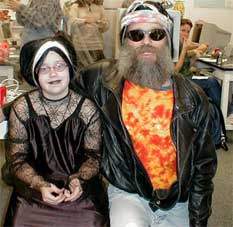 One of my New Years Resolutions is to make sure this guy doesn't have functioning kneecaps anymore. Same thing goes for his wife the mortician there.

1) STOP PUNCHING WOMEN IN THE MOUTH - Okay, that one's a little unrealistic. I'll change it to "PUNCH LESS WOMEN IN THE MOUTH" once I figure out how to delete shit on this computer machine screen. There's no goddamn way for me to delete shit on here because this computer machine is a goddamn lemon and whenever I press the DELETE key it begins to make this sound like a pregnant gopher stuck inside a airlock. One day I'm going to hunt down and jab tent pegs into the eyes of the retarded shittwist who sold me this lump of vacuum tubes and strings because I'm sick as hell of it making my drapes catch fire every time I turn it on. Anyway, I'm probably going to start hitting less women in the mouth unless they fucking deserve it, and that's a majority of the time because the mammoth she-beasts in this town are always pissing me off by saying stupid shit like "stop hitting me" and "why are you hitting me?" Women should be seen and not heard, and in the case of the doughbears infesting this cursed hellhole, they probably shouldn't be seen either. The Appleton City Council should pass a resolution forcing every so-called "female" in this rotting dump to wear one of those giant quilt things that those religious nutsos have to wear in the Middle East, whatever they're called, I think they're the ultra-Jews. For example, that rotting carcass Betty Grable at the PTA needs to have a quilt draped over her 300-year old husk of a body and then maybe somebody should roll it up and chuck her into the tire burning dump in Meyer's Circle because the only possible use this community could get out of Betty Grable was if she was burned and provided fuel to heat our homes. You know, like whatever they use now for fuel, coal or diamonds or gas or that shit, just throw her into the diamond burning fuel plant so I can turn the heat up to 82 in my house and be comfortable for at least a few hours out of every wretched day I have to survive in this suburban suicide chamber.

2) BECOME THE CEO OF THE PTA - Before any of you assblasting nerdcenters once again whine, "wah, but Cliff, you don't have any kids so you can't become the CEO of the PTA," let me make one important point: SHUT THE FUCK UP. I don't need no stupid drooling bastard kids to know what's best for the immature simps in this town because I run into these oily losers every goddamn day. I was once a kid too, although I wasn't a clueless retard like all kids these days. You want to know why I turned out so well? Well here's why: CHILD LABOR. I was shoveling coal into a gasoline station every morning at 6:00 AM until 9:00 PM every day, 376 days a year. Back when I was a kid they didn't have all these little pansy Liberal child labor laws, so we knew what it was like to work for a living. We respected our elders and if we did even 1/100th the kind of shit the grease slobbering dimwits these days do, we'd be taken out back and whipped 70 times with a lightning rod that we were forced to build out of iron. What kids need these days is some fucking discipline, and I'm the only guy with the balls big enough to say what needs to be said. If I'm elected to CEO of the PTA, one of the first damn things I'll do is make the school day last from 7:00 AM to 9:00 PM because I don't want any of those idiot bastards running around my neighborhood when I'm awake. All they do is kick crap around and trample in my goddamn bushes, and if I catch another slackwitted shitfactory jacking off in my plants, I swear I'm just going to lose it and launch a mortar shell into their skull. And if you think I don't have any mortar shells left because the fucking government raided my house last weekend, you got another thing coming to you, Leprechaun fuckcoaster. 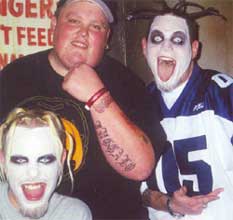 One of my first acts as the CEO of the PTA will be to use a flamethrower on any braindead slugbait kids who look like this.

3) FINISH MY TOOLSHED - Yeah, I know ol' Cliffy's been working for quite some time on his toolshed, but that's because I want this thing to be a good piece of work and not some Jap shitheap like they sell at the Home Depot or Bernie's Wood Hut or one of those stores in the Appleton City Wood District. I swear, this toolshed is going to be a work of goddamn art, like Picasso's Mona Lisa. I've got most of the roof done, and all I need to do there is nail a few more boards to it and smear that roofing tar across it. The problem is that I always buy roofing tar and run out because I throw it through the Patterson family's window when they're trying to eat or hold a eulogy or whatever. There's nothing funnier than seeing those fucknipples wallow around like tarpit ham creatures once a can of roofing tar has exploded all over them. So there isn't much left to do on my toolshed except build a couple of the walls and pour in the cement and the structural foundation and knock holes out for windows and find out where to buy steel to cover the walls with and oh yeah, that roof thing too. But other than that, I'm practically finished with this fucker and let me tell you, I plan on fucking throwing a party like you wouldn't believe. And no, you're not invited because the only person on the invitation list is a Mr. Jack Daniels, who you'll probably be meeting when I show up at your house with his emptied body, ready to break it against your head like the Jewish people do when they step on beer glasses after getting married or whatever.

So those are my three New Years Resolutions and that's all I got because other than that, I'm pretty much a perfect specimen in every conceivable way, and any of you chew factories who think otherwise should send me your home address so I can pay you a visit and shove your hand so far up your ass that you'll be scratching your own lungs for weeks. And I'll update my computer screen Intarweb thing when I get around to it, I've been really busy this fucking month and the last thing I need to do is look at even more butter troll images than I'm normally exposed to during a trip through Wal-Mart.

Okay I don't know why the fuck Richard asked me to write this shit because arts and crafts are for the pink haired sissy skirts who play Bingo and dream of making out with Sam Watterson, but whatever. He's buying me a box of Steel Reserve beer and drinking a few 6 packs of that shit will make me forget that I just wrote a computer screen dedicated to Intarweb nerds. I don't really know how to make much crap because if I want furniture then I just go down to Sears and steal it, so I guess I'll just make a diagram showing how to build your own lamp.

HOW TO BUILD YOUR OWN LAMP
BY CLIFF YABLONSKI

So there you have it, enjoy your arts and crafts deathtrap you little ratfuckers.

Dari quickly ejaculated onto her face and hair and then hurried to catch the bus since there was nothing he could do otherwise. He caught the bus just in time and climbed on board the bus, riding it to his school. He thought some more about the girl he ejaculated onto with his meat rod which segued into him thinking about his mother. Americans might think this is creepy but in Japan it is not illegal to have sex with your mother or knock over and ejaculate onto a stranger. In fact it is encouraged in Japan, so much so that if the mayor of a city sees you doing either of these things particularly well he will immediately give you the key to the city and pin a blue ribbon onto your chest that gives you a deep discount at bath houses. Dari regretted that the mayor was not around to see his beef pole ejaculate onto the blue-haired girl because he surely would have been granted the key to Ogataka.