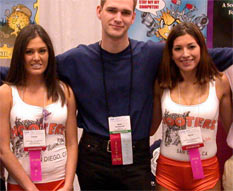 Your wife or girlfriend probably can't wait to uncomfortably look away as you oggle the orange-clad ass of Hooters flight attendants!Now is not the time of year when most people are thinking about even more travel plans. They have the hectic holiday travel season just behind them with the terrors of delayed flights, long drives, and hotels where the pillow mints move when the lights are off just barely beginning to fade. The last think they want to think about would be planes, trains, or hydrogen dirigibles. Here at Something Awful we realize an opportunity when we see it, especially when it's someone else's bright idea that we can copy or even improve with virtually no effort on our part. To this end Rich "Lobo" Kyanka and I have been taking time away from reading Ben "Gumby" Platt's 10,000 word epics about feeding his dog to comb the headlines searching for the latest trends in the travel industry.

One idea that has really greased my wheel lately is that of Robert H. Brooks, one of the entrepreneurial mega-geniuses behind the Hooters chain of restaurants. Always using that quality mind of his, Mr. Brooks has set out to fuse the high-class style of charter airlines with the campy and queasy T&A bottom-barrel style of the restaurants he owns.

In a news release, Brooks said he plans to establish a charter air service called Hooters Air and would provide leisure travel service for the golf industry to Myrtle Beach, S.C. Brooks also has a home there.

Now famous golfers like Tiger Woods can be treated to the same mediocre hot wings and gaudy tourniquet-like orange hot pants of Hooters while they enjoy the heavy turbulence of a small commuter aircraft! This amazing concept has inspired me to work on several ideas for potential airlines that we could develop with the incredible capital we are raising from those 29.95 banner ads here at Something Awful! Rich agreed, or at least he didn't reply to my ICQ message calling me a "dirty faggot" like he usually does, so I set to work with three concepts that are set to take the difficult airline industry by storm.

World class service with back alley attitude, you can't spell class without ass!Stealing my ideas directly from the fertile mind of Robert H. Brooks, I have made plans to begin assembling Big Booty Ho Lines. Think of it as the next evolutionary step of Brooks' Hooters airline. Since the quality of the aircraft is not overly important - it's the quality of the service onboard the aircraft that really matters - I have already made arrangements to purchase ten aging DC-10 aircraft from ladrillo que cae airlines in Mexico City. The planes are fairly unreliable, but thanks to the wall-to-wall carpet remnants I am having stapled to the inside people should make it out of the flights with little more than a few bumps and bruises. To compensate for the cheap and generally dangerous aircraft we will be operating Big Booty Ho Lines will be staffed only the most ridiculously and almost grotesquely curvaceous women we can find. Black, white, yellow, it doesn't matter as long as they have "[it] going on" with "gear in the rear" or "junk in the trunk".

Taking the services offered by Hooters Airlines to the next level, our bodacious babes will be more than willing to bare it all for you. In fact they have will do whatever you want, from all anal action, to painting your barn, to blowing the biggest hot glassware you have ever seen. For your convenience each aircraft's bar area has been fully stocked with an assortment of beers and fine malt liquors and the storage compartments are nearly overflowing with every fetish item you can imagine, from fur suits, to casts, to live goats. Adding to that dangerous feeling of hiring a street-walker, we have positively not checked any of the staff for venereal diseases. They could have AIDS, they could have herpes, they could be as clean as a hospital floor, or their entire body could be covered with stinging cells like a jellyfish. Only by unlocking the dark secrets of their booty will you discover the truth! Even the pilots and cabin crew at Big Booty Ho Lines are willing to get in on the action and guaranteed to have butts that just won't quit and hips like a tyrannosaurus rex. To quote the immortal words of The Bard (Sisqo) our girls have "dumps like a truck. Truck. Truck." As well as "thighs like what. What? What." Needless to say our ladies will make you sing it again. 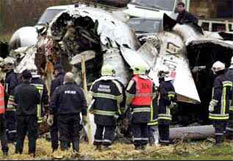 Another 176 satisfied passengers and 14 hard-working TerrAir crew members.One of the greatest concerns of Holiday travelers and those who tend to fly on planes in general has recently more than ever been terrorism. To address this issue we have created a totally terror-free zone with TerrAir, our newest and hottest International travel property. The concept is simple really; terrorists blow up and hijack planes to strike terror into the hearts of anyone who has to fly or works in a building particularly vulnerable to plane impacts. What if there was an airline that skipped the middleman and ensured that every single person onboard every plane was in total mortal terror during the entire flight? Now there is, thanks to Something Awful's TerrAir service! From prop-driven commuter planes to the largest jumbo jet our planes receive no maintenance whatsoever and are piloted only by the most drunken and inept people we could find. What terrorist with half a brain is going to waste his life suicide-bombing a plane that has a one in three chance of crashing on take off?

To ensure that TerrAir maintains only the most rigorous failure levels our trained mechanics will actually sabotage planes that have been functioning too well. If our aircraft does not have at least one near-catastrophic incident such as failed landing gear, two or more failed engines, or mysterious fires that consume half the plane, then we will ground it and our TerrAir technicians will wire it to satisfaction. Still not convinced? Think there might be a gun wielding maniac waiting to board one of our airlines? Don't worry, there is! The entire courtesy crew of every aircraft consists of only the most dangerous and insane felons we could find, randomly armed with items ranging from hobby knives to shotguns. No hijacker in his right mind is going to set foot on a plane where a three-hundred pound bald woman who drowned her children is running around shrieking and carrying a hatchet. So come fly with us and we guarantee that if you die on one of our planes it will not be at the hands of a terrorist, it will be in a sudden freak "accident". 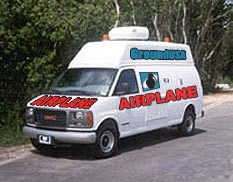 A fully loaded GroundUSA "aircraft" prepares for takeoff.After developing the proof-of-concept for TerrAir by shooting down a United Airlines flight to Boston with a rocket launcher I quickly realized that some people might consider even the guarantee of a terrorist-free flight intimidating. For those too terrified to even set magical airplane wings in the sky we are now working on GroundUSA. This innovative new "Imagine Liner" takes flying to a never before seen level: the ground! Simply book your flight to a location of choice through GroundUSA at one of our more than 90,000 hubs throughout the United States. When you arrive at the hub you might notice that it doesn't seem like a normal airport, but don't be alarmed! Our trained "flight" crews know what they're doing and all of our "aircraft" are routinely inspected.

Your journey on GroundUSA begins with a quick check of the flight schedule. You'll notice that our flights are almost never delayed and run in even the worst weather. Once the arrival of your "plane" is announced you are free to head out to the tarmac to board your "flight". You may notice that the "aircraft" closely resembles a utility van with the word "AIRPLANE" written in bold red letters on it. This is because at GroundUSA your safety comes first, and the only thing safer than flying with GroundUSA is not flying with GroundUSA. As your aircraft "flies" repeatedly around the tarmac for roughly an hour you will be relaxed by audiocassettes of ManCow our "entertainment technicians" and "flight crew" have recorded off of the radio for you. This will be followed by advertisements for GroundBoatUSA, a trans-Atlantic service for people too afraid to ride in boats.

When you arrive at your destination you will be greeted by the same friendly faces that helped you aboard and your baggage will be right where you left it! We know that you appreciate continuity almost as much as safety and with GroundUSA you can rest assured you'll have both in spades! If there are any problems such as you taking too long to collect your baggage or being too slow to disembark from your "flight" we have ground crews standing by with a fire hose to helpfully direct you towards your destination.

Rich and I discussed many other plans for our airline expansion here at Something Awful, including "Teamwork Airlines", an amazing concept that could revolutionize the industry. Various airlines in developing countries that cannot afford an aircraft would be able to buy one half of a jet-liner, either the left or right side, and "dock" with another one of these Teamwork Airlines to fly to their destination. This system would require total teamwork to stay aloft and our trial runs with a small Czech Republic and a small Peruvian airliner have worked amazingly well so far. Due to the proprietary nature of docking systems on the half-planes there was some difficulty attaching the two halves. Fortunately a quick-thinking member of the maintenance team secured the flight attendants to the walls of the plane and had them hold ropes that extended across the interior of the fuselage.

Sadly, a team of scoundrels from a competing airline firm out of Nigeria forcibly docked their half-plane with the Czech Republic plane during the course of the flight. Their half-plane forced the Peruvian plane out of the way and sent it spinning out of control into a mountain, killing everyone on that side of the plane. Then the Nigerian pilot got mad at the Czech Pilot and demanded all of the money in his wallet or else he would cut the power to his side of the plane. Not understanding him, but feeling threatened, the Czech pilot donned a parachute and bailed out of the cockpit. The remaining two halves of the plane proceeded to crash into a different mountain.

Ask Emily Things about Other Things!

I just started seeing this girl whom I've known for about a year now. She came to visit me a few weekends ago and we kinda went out on an impromptu date and had a great time. I felt it, I knew I was gonna kiss her that night. Then she complained about a cold sore. My heart sank. I don't get cold sores and I certainly don't want to start now. Well, eventually hormones and alcohol convinced me that it would be okay to kiss *around* her cold sore. Yeah, it was awkward, but we still enjoyed ourselves. It's been two weeks now and I've yet to show signs of mouth herpes. Just how contagious are cold sores? And was my "kiss around it" tactic a sound technique?

I can't wait to see how this turns out! You had better feel the same way or you will be sorry. GO READ THE THRILLING CONCLUSION! Then, go straight to hell.