Somewhere There is a Crime Happening 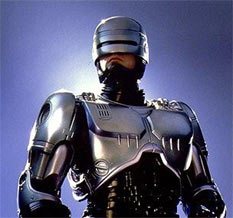 Your move, creep.Every year I unconsciously select some aging warhorse of a big-budget action movie to become obsessed with for that particular year. I think it dates back to the time I first became addicted to the original Dune movie when I was about 14. I loved it and watched it roughly once a month, thrilling to every rubber sandworm that crested from the rolling sands of Arrakis. This year I am getting started early with an undying love of Robocop. This documentary about a revolution in law enforcement in Old Detroit is undeniably one of the greatest films ever made. In exacting detail it covers Omni Consumer Products' plan to institute a new form of robotic policing to protect the construction workers building Delta City. After a glitch ruins the hopes of Dick Jones and his ED-209 program, an up and coming executive seizes the moment to show off his own "Robocop" program that transforms the unneeded corpses of veteran cops into cybernetic protectors. After some fanfare, shooting, more shooting, and the tragically fatal fall of Dick Jones from the OCP building everyone watching this documentary realizes just how necessary a new form of policing is.

I have been so deeply moved by Robocop and the pragmatic ways of Omni Consumer Products that I can't help but speculate as to the future of law enforcement here in Chicago and the rest of the United States. Crime is a big problem, and while the valiant efforts of the current police are often helping things, it just isn't enough. What I propose are some revolutionary steps similar to Robocop that could turn things around, really make the streets so clean you could eat off them. Instituting a Robocop plan would naturally be the first of these steps, since I live nightly in fear of Clarence Boddicker who gleefully appears on Fox as if nothing ever happened in Old Detroit. But we can do much more!

The Soviets trained dolphins to kill scuba-diving saboteurs. Scientists have taught gorillas sign language. Someone taught clowns how not to murder children. What's next, the government teaching babies how to fight crime? YES. A baby is born every second according to something I saw on a pro-life motivational pamphlet, making infants the largest single untapped resource in the world. Sure, we could listen to blowhards like Jonathan Swift and use them as food stock, but when you get right down to it that just isn't efficient. K-9 units have been a mainstay of law enforcement since the time of flappers and hooliganism, and not even Hitler would argue that humans are less intelligent than dogs. So we train them, as a force for good not evil, to patrol the streets armed with the finest tools we can provide. I propose mounting some sort of shotgun onto their back and attaching the trigger mechanism to a chewable rubber ring. When the infant spots a suspect he or she can crawl in their direction and bite down on the ring, blasting the perp into the afterlife. 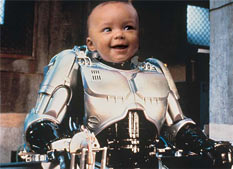 Baby Robocop may not be quite as imposing as the original, but he is every bit as devoted to upholding the public trust.Naturally all of these infant law-enforcement officers won't manage to get by unscathed; in fact I expect them to succumb to the rigors of their duty much more frequently than your normal cop. From careless drivers to hungry crows, the baby cops will die by the hundreds in the line of duty, sacrificing themselves on the altar of democracy to ensure that we live in a free society. Always tireless, even in death the vigilance of these baby protectors will not end. Installed into a cybernetic body they will go on to serve in much the same role as the original Robocop. What they lack in fine motor skills, problem solving skills, and the ability to recognize colors and numbers, they more than make up for with their insatiable lust for inserting objects into their mouth. With a simplistic reward system the babies will be re-trained to operate cars, fire guns using robotic hands, and pursue justice even more vigorously than they did during their brief lifetimes.

The Robocop program and its sister program Baby Robocop both rely on the bodies of the recently deceased to be inserted into cybernetic bodies. While both of these programs are very effective, as evidenced by the dramatic decline in violent crimes and Nuke trafficking in Old Detroit following the introduction of Robocop, they are also prohibitively expensive. Skeletons, on the other hand, are available everywhere fine corpses are stored. We can't put them in a robotic body since they don't have a brain to power it, but we can attach them to an intricate series of cables that lead to a "control chamber" in a helicopter. Already Police Chief Marionette of the Old Detroit Police Department has been testing out their first pilot Skelecop program.

The program has run into a few snags, mostly caused by crooks fleeing into buildings, at which point the skeletons have to wait outside while the helicopter hovers above since they would just get tangled in the roof. Particularly vulnerable to this problem is the Skelecop undercover vice squad. These brave skeleton puppets, dressed in the very same style of clothing that criminals wear, are tasked with infiltrating every facet of organized crimes. As long as it never involves going indoors. Police Chief Marionette has already got a city ordinance on the books to remove all rooftops from buildings within city limits, so this may eliminate the problems with that. There have been a few instances where the Skelecop control unit encountered Police Chief Marionette's arch-enemy, the mysterious villain known only as "The Vaudevillian". This shady character employs puppets, racist jokes, and a range of gag-firearms in thwarting the efforts of the Skelecop program. 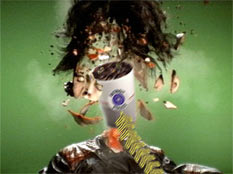 Plainly visible are some of High Speed Cup's 1,405 rank chevrons.From the labs of OCP comes the future of law enforcement. High Speed Cup is a cup that fights crime with a passion, a passion for speed and violence, and a record of promotion after promotion. High Speed Cup consists of a 7-11 Big Gulp cup which can fly at high speeds. It rams into the heads of suspected criminals, causing them to explode. Then, after killing a criminal organization, it will return to the Old Detroit Police station and the chief says "Great work, High Speed Cup! You get a promotion!" The chief will promote High Speed Cup every time it kills anybody, regardless if they're a criminal or not. Eventually High Speed Cup will get so many promotions that it is promoted to the rank of "GOD" and the government forces everybody to change the bible so that every instance of the word "God" or "Jesus" is replaced with "FAST CUP". This project is in the very early development stages, but if it proves successful then we can expect the workers building Delta City to be as safe as if they were sleeping in the Pope's house. 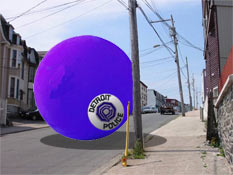 Ballcop, pictured here on its maiden voyage, may soon be replaced by SWAT Ballcop.One of the least expensive new policing options is the innovative Ballcop program. Relying not on fancy robotics or the walking dead, it uses instead the timeless crime-fighting duo of massive rubber balls and gravity. The prototype Ball1 was first deployed in October of 2002. Consisting of a 20' sphere made of blue rubberized plastic, the ball was placed at the top of a steep incline by the Old Detroit Police Department. When a call came in that a robbery was in progress the ball was released and gravity did the rest. The ball enforces the law a bit randomly, running down suspects and onlookers with equal fervor. Unfortunately the subjects in that particularly instance fled into a building that was not in the immediate path of Ballcop, thereby escaping its wrath. This unexpected strategy will be addressed in the latest version of Ballcop known as SWAT Ballcop. This version employs "unpredictable tactics" in addition to its normal 4-tons of rolling justice. By filling the ball to the half way mark with some 3,000 gallons of water, the ball will zig and zag randomly, potentially crushing the cars or homes of villains.

There are many other excellent new policing strategies on the horizon, from myself as well as other law-enforcement think tanks. The only limit to what our police forces are capable of is the imagination and possibly funding. Coming next week I will cover my plan to replace our nation's high rise apartments with houses suspended in the air by balloons. Also look forward to my article on cars made out of meat and boats made out of African Americans.

Livestock here, letting you know that Photoshop Phriday is once again fresh and ready to be eaten. The always busy Something Awful Forum Goons created a lovely plethora of pictures making the act of war an act of fun. Why just take a look! 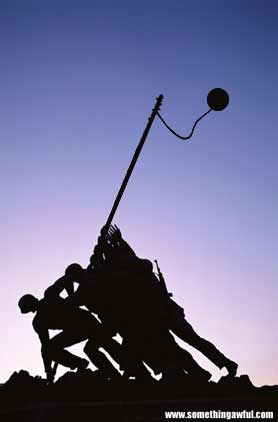 Do your civic duty and peruse this Photoshop Phriday!