The Hillbilly End Times is Here

While you were alone on New Years Goa'uld Lang Sine-ing your way through your top picks on Netflix you might have missed the good news: this shitty world is finally ending. The signs are irrefutable. Things have been going weird in Arkansas. I mean weirder than usual. In Beebe, Arkansas, over a thousand bird corpses fell from the sky. The next day, dead fish mysteriously choked 20-miles of the Arkansas river. Officials responded with the sort of professionalism and caution you would expect during certified End Times events:

The affected area was never closed and fishing is encouraged. "Right now it's fine to fish. If you go out there you can still fish for bass and crappie, catfish, it will be fine. Obviously don't eat the dead fish."

Sure, we got no idea what went on with this fish apocalypse, but go ahead and catch some bass. The water didn't turn a weird color or nothing.

The official was similarly unmoved by the idea of clearing out all those rotting fish.

As for clean up, nature is taking its course. "We'll have raccoon and birds and things like that will take care of it so there is really no clean up, it's really too big. It's contained along the river channel." 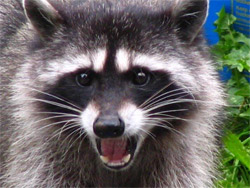 "Forget Yucca Mountain, all we need is a couple raccoons to chew through this radioactive waste."Dead birds rain from the sky, a couple hundred thousand dead fish turn a river into a scene out of the Book of Revelation, and it's no big deal. Raccoons will take care of it. Maybe some of the birds that fell down people's chimneys and stunk up the school's roof can eat them fish. These same officials believe the two incidents are completely unrelated. What could be more reliable in the midst of a real Andromeda Strain situation than a public official wearing homemade pants analyzing samples by squinting real hard at the river and swishing the water around a little in his mouth.

"Bio-containment? Quarantines? What's that? Just give it a day and them raccoons will run up there and eat all the meteorite. Oh, sure, you guys can hunt up there, just trying not to shoot the glowing parts of the meteorite. And if y'all run into any space zombies you probably shouldn't eat 'em." 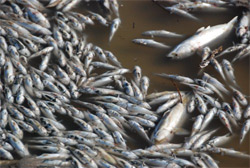 What could possibly go wrong fishing here?Although the impending destruction of Arkansas seems like an absolute good, there are down sides. For example, all states currently ranked 49th in things like High School Graduation and Infant Immortality will immediately drop to last place. Also, it turns out several roads through bogs and foothills and boggy foothill country where rag-clad jug-hooters mine things like soda and phosphates actually connect Arkansas to the rest of the world. The spread of this hillbilly apocalypse isn't going to be contained by a bunch of Ozark militia units riding around on hay wagons and threatening raccoons with firecrackers.

To address this crisis you may still survive - barring super volcano eruption - so you had better be prepared.

Get some raccoons. According to expert officials, these guys can handle just about anything. Turn them loose on all your problems: devil horses, black rainbows, child distemper, Bread Fervor, imps, incubi, and the sort of sordid beast that gets off on lurking beyond the threshold of all human comprehension. Chewing on raccoon poop may give you lethal brain worms, but there are worse things out there than deadly brain worms. Just ask those fish and birds. Oh, wait, you can't because they're devil-dead.

Repent. Easy, free, and always a good preventative. If you can't find a priest or notary you can just write down your refutations of sin, place them in an envelope, and mail them to yourself. Don't open the envelope or your sin will come back on you threefold! 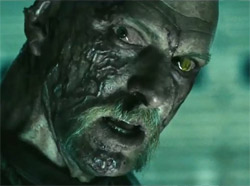 When all else fails, you may have to shoot evil hillbilly devils.Buy a gun. Similar to repenting only not free. Food, rage-virus infected loved ones, raccoons; you're going to have to shoot something sooner or later in an apocalypse. You can mail a gun to yourself but you're only delaying the inevitable gun suicide.

Get overalls and a hootin' jug. When the three-toed Ozarks rapers and their ringleader, the mysterious Official, come down from the hills looking for something to make pregnant, your best bet is to blend in. Snip off some fingers and toes with tin snips or, if you've got extra fingers and toes lying around collecting dust try gluing them to your body. If you're too squeamish for that just draw on an extra eye. It'll fool them unless they get close and if that happens they're already onto your spoor.

Don't ever go to Arkansas. Even before this end times stuff started happening it was pretty much the Zone from S.T.A.L.K.E.R. so imagine how S.H.I.T.T.Y. it is with old scratch on the loose.

Last bit of advice I'm going to give you, from one Internet person to another: never talk down to horrible hillbilly states. The scuttling yokels reared in these wretched wastelands tend to get Stockholmy about their hostage-taking geography. They will take offense like looters at the chain link factory. No one knows why. My theory: the raccoons already have them.