Before I start, I must warn you: you're about to read an extraordinarily bad joke. If you're a regular reader of this site I'm sure you think you're used to them, but trust me: this is a really bad joke. I've been depressed ever since I heard it. I've lost sleep over it. I really felt like I wouldn't even be able to write an article tonight because the joke sucked all the marrow out of my funny bone.

I'd accuse the Wait Wait guys of going through Jay Leno's wastebasket, but I think even Leno would have whipped out a lighter and burned that joke to avoid contaminating the population. It is a cruel and mean-spirited parody of humor. It goes way over the swingset of Norm MacDonald-style anti-humor-- his anti-humor is funny for being intentionally unfunny, but this... this...

It's not so unfunny that it's funny-- it's so unfunny that maybe nothing can be funny again. Maybe nothing ever was funny. The whole concept of humor is called into question. When I try to merely recall the sound of laughter, I feel the panicked grief of a mother realizing she can't quite remember her dead child's face.

If there is a hell, it is that joke.

I was driving with a friend when that joke aired, and we both immediately started screaming. I instantly switched off the radio, and I'm lucky I did-- I just listened to the web stream to make sure I got the wording exactly right and found that if we'd listened a bit longer, we would have heard the panel making a half-assed attempt to riff on that turd:

[Peals of laughter from audience]

Peter Sagal: Or maybe you asked Santa for someth-- 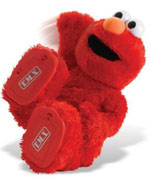 If I'd heard that while driving, I probably would have jerked the wheel immediately in the direction of the deadliest available collision. Come to think of it, no lie, an ambulance rushed by me right after the joke. Maybe someone else didn't catch the dial in time.

I falter at basic attempts to comprehend the joke. How was this joke written, and by whom? For what purpose? It's so gruesomely unfunny that it almost seems as though there was malicious intent behind it. Maybe it's part of NPR's insidious, long-running liberal plot to destroy Christmas-- I know it ruined mine.

It can't possibly have been a sincere attempt at topical humor. The Tickle Me Elmo reference is so ancient that they may as well have said "Viagra"-- actually, that would have been less outdated, since Viagra hit the market in 1998; tickle Me Elmo was nineteen ninety fucking six. The TSA scan reference is the topical bit, but it feels intentionally botched-- if they wanted to make a Tickle Me Elmo joke, why go for the scan? Couldn't they at least have said "TSA Pat-Me-Down Elmo" to preserve the tactile element?

You can replace the TSA scan with literally any other topical reference and it's no less funny:

I know it may seem like I'm just picking on a square comedy show from my lofty position as a Z-list online humorist, but I don't even hate the show. I'm a Wait Wait Don't Tell Me apologist; I used to listen to it almost every week. I have a grudging tolerance for middlebrow topical humor. I unironically find Paula Poundstone funny. This joke was, if not quite an isolated incident, not fairly representative of the program as a whole.

Even when it's unfunny, which it often is (especially when Mo Rocca is on the panel, flailing insufferably at jokes just out of his reach), it's not that unfunny. This was a horrific new low. Something perverse and otherworldly happened-- like Satan himself reached into the body of Peter Sagal and wrung out a joke so unholy that it would make a nation renounce their holiday joy and curse the day of Christ's birth.

Only time will tell whether I can forget the joke and move on. My next Something Awful update is scheduled for two weeks from now, and I can't promise I will have recovered. You may just visit the front page and find a technical manual for a blender or something.