Please excuse me while I mangle the lyrics to one of the worst Megadeth songs ever created in a long lineage of bad Megadeth songs. Robot fever is currently sweeping the nation, as it tends to do roughly every six months. We have been raised on a great love for robotics; they are our helpful mechanical friends, dedicated to serving us and doing the labor that we just don't enjoy doing. You can see them in "House of the Future" and "The Kitchen of Tomorrow" movie reels from the fifties, where futurists believed every kitchen would come equipped with a sparking and beeping butler to toss salads for you. Nearly every science fiction movie shows just how helpful robots can be, especially foot tall robots that look like end tables on wheels that scoot around and serve no purpose other than carrying drinks at science fiction parties.

The reality is slightly different. We've got robots building cars and computers, robotic aircraft that provide reconnaissance information or drop robotic bombs. But where are all the household robots we have been promised for decades? Why can't food service robots surpass the technology displayed by the band at ShowBiz Pizza? Ladies and gentlemen, they can and they will.

Arlogeist GmbH, a recent acquisition of StateOg and its partner Mordred, Dread Lucian, and Goldbaum, Inc, is pleased to present our spring line of robotics for the home and office. We have freed the technology of robotics from the shackles of industry and offer it now for personal enjoyment and office assistance.

The SJT will make toasting fun and easy.Direct from our engineers in Japan comes the Sparkling Joy Toaster, a revolutionary design in "smart" kitchen appliances. Capable of toasting four pieces of bread to a variety of levels based on your personal tastes, the SJT will also sing and flash a number of lights at you as it does so. Because we could not afford the rights to songs, the SJT is limited to a catalog of 25 public domain pieces. Sometimes it will improvise lyrics to the songs but because we couldn't figure out how to make it so that the Toaster could tell what song it was playing, the lyrics will never match the melody. The SJT is fully mobile, with four small load-bearing legs that allow it to move around your kitchen at a brisk 20 miles per hour, which it will do constantly whenever toasting bread.

The SJT unit weighs in at a considerable 250lbs, but thanks to its ability to move on its own you won't have to worry about lugging it around the kitchen when you toast. When the bread is inserted and the toaster levers depressed it will begin singing and flashing its lights. After its main engine has charged it will run in circles around the kitchen. Its advanced collision detection ensures that any bumps will probably not kill or severely cripple you. The flashing bulbs got extremely hot and may light flammables within your kitchen on fire, so it is suggested that you install ceiling bins for all potential fire hazards that the SJT might collide with. It is also highly recommended that you replace weak kitchen flooring with a StateOg Industrial Effluent Channel. That way when the SJT runs off it won't destroy any of your valuable cookware or children with its whimsical hijinx.

This close-up of the amazing "Nanites" that compose the Nano Hat shows you the incredible detail of the devices.Advances in micro robotics have made possible one of the most revolutionary and advanced home robotics achievements since Teddy Ruxpin. The Nano Hat consists of a swarm of electrically stimulated flying micro droids. These "Nanites" will hover in a corner and read your brain's electrical impulses. When they detect that you wish to don a hat they will coalesce into the shape of the desired headgear and drop down onto your head. This advanced hat robot collective is still in the prototype stages, so there are a number of technical and user interface issues we still need to work out.

The Nano Hat can transform into the following hat types:

This list will be greatly expanded once we can program the Nano Hat for more hat types. Due to current model limitations if you try to use the Nano Hat for a non-programmed hat type it will default to a Top Hat. If you use the Nano Hat to make any type of Baseball Cap not affiliated with the Orioles or Brewers it will become enraged and attempt to "repurpose" the subcutaneous fat of your thighs into the shape of Abraham Lincoln. If this occurs do not move no matter how painful the process is or the Nano Hat may attempt to utilize other tissue types. Blood loss should be minimal. The vestigial Abe Lincoln should be no more than six inches tall and only semi-sentient. Feel free to go to one of our conveniently located Lincoln removal centers and in a painless procedure we will remove it with very little scarring or swelling.

Do not tell Abe Lincoln any secrets or discuss sensitive issues while his ears are exposed as he has very little self-control and the propensity to engage in scuttlebutt. 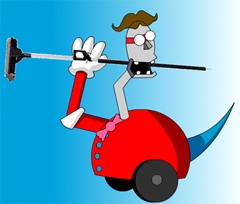 Mop + Molestinator = Clean householdWhen we purchased the design schematics for the Molestinator from "Team Leapin' Leprechaun" we thought we had made quite an amazing deal. When the Molestinator turned out to be a smoking pile of junk that caught fire almost hourly and would be overturned by a slight breeze, we tried to sue "Team Leapin' Leprechaun". Unfortunately their offices in the back of a 1984 Ford Aerostar minivan had relocated to parts unknown and we were left with seemingly useless blueprints.

Never doubt American ingenuity! Helpful Arlogeist janitor Phong Dao determined that if you used an entire roll of masking tape to secure the head of a mop to the front of a Molestinator, when it sort of wobbled around it would clean up the floor. This was a real windfall, so we promoted Phong Dao to head of the Molestinator DX209 project, our own innovation in the cleaning robot market.

Now we are proud to offer the greatly improved Molestinator DX209, ready to take your kitchen or bathroom by storm and revolutionize the home of 2002. The Molestinator DX209 includes a number of amazing features such as:

The Molestinator is modestly priced and ready to service your needs. The Molestinator comes free with a carrying case that doubles as an emergency fireproof storage unit.

The Banana Rackarang is not fetus related!Advances in gyroscopic technology have permitted Arlogeist to develop the new and incredible Banana Rackarang. This amazing new robot not only solves your banana storage crisis, it will entertain your family and friends with hours of circulating around the room. The Banana Rackarang is launched when you press the activations button and insert a single banana into its carry pouch. It will then fly in circles around your kitchen until you need a banana. Then just capture it in the included banana net.

The Banana Rackarang is so much fun that you might just collapse from a serious case of the "Fun" heart attack. Batteries? Gasoline? Coal? Dried Timber? Love? Nope, the Banana Rackarang runs on bananas. Its three-stage enzymatic processor derives all the power it needs from the bananas you insert into it. It only uses one banana per hour!

The Banana Rackarang will scream constantly at you any time you take a banana from its banana pouch and it will cry about "my babies", but just ignore that. Also ignore it if it starts bleeding, no matter what the government might tell you the Banana Rackarang is completely mechanical and has nothing to do with a human fetus.

So check out of the hotel Hard Work and into the hotel Easy Street this year with a little help from Arlogeist's robotics division! We make easy living as easy as cutting a really easy pie made out of easy fruit.

Fragmaster and the SA Forums have cooked up another incredible Photoshop Phriday with a little help from Lowtax's sexy posing skills. He posted some photos of himself and the goons went nuts with the Photoshop, let's take a look at the results: 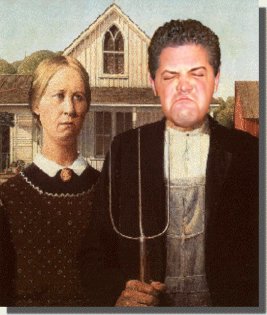 Recently, Something Awful founder and editor-in-creep Richard "Lowtax" Kyanka had his feline friend Spaz the Cat snap off a few candid photographs of his visage in a variety of saucy poses. Lowtax then had the good sense to post these pictures to the SA forums, and his Photoshop-happy fans did the rest! Enjoy their quality digital editing or else!

They went to a lot of work so we didn't have to, so head on over and check it out!