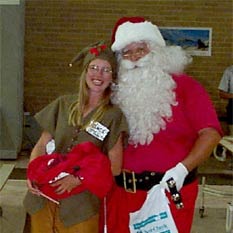 Lady, get away from him! He's wearing those rubber gloves because that's how he likes to screw people.I have commented before on my dislike for the Holidays, and I must admit while this one has a lot of promise for joy and happiness, this Christmas is already shaping into the usual burning meteor of suck. If this Holiday were an animal and I were to dissect it in the grim Christmas abattoir I believe I would find that one lobe of its brain is greed and another generosity. The blood that flows green through this beast's veins is the viscous sludge of rampant capitalism, and the pinkish glow of its cherub's smile comes from the charity you can find if you look hard enough. It's a creature of contradictions and it even after a complete autopsy I can't decide whether it is a holiday of joy masquerading as a manipulative month long commercial for buying gadgets, or if it is a month long commercial for gadgets with a heart of kindness.

Any way you slice and spread it, Jesus isn't in there anymore, so shut up about "the reason for the season". Jesus was a commie and this country just doesn't go for that sort of "share everything" policy, we only share when the government makes us or for tax write offs.

To kick off Christmas I drove 8 hours to Illinois from Ohio to pick up my grandmother so she could stay with my parents. There is something dispiriting and desolate about driving through parts of Illinois in the winter. Much of the state is normal, but portions are so flat and agricultural that you have massive empty cornfields that stretch to the horizon in every direction. You can see a car driving on another road five miles away and other than it and a few diesel belching metal monsters on the interstate with you, you are utterly alone.

When I reached my grandmother's house I spent an hour or so helping her organize her huge quantities of junk she was going to bring with us. After that we sat in her living room and she told me about how alone she was since my grandfather died, how she was afraid she couldn't keep up her house (it is dusty but clean and in excellent repair), and how I should look around the house and take anything I wanted. I politely declined and was reminded how some family members might jump at that chance to loot the tomb of the still living. After that we had very little to talk about being so vastly different, we did discuss politics since we can usually agree on that, but for the most part we watched CNN with half of the screen obscured by closed captions. 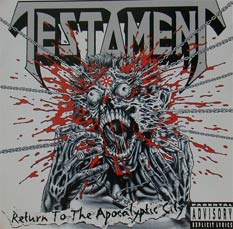 This album cover from hit sensation Testament roughly approximates the vistas of rural Illinois.When I went to bed I remembered why I hate staying at my grandmother's house more than any single reason; her guest beds. There are three of them, all identical in size and composition. They are single beds dating back to when my father and his brother were kids, probably the fifties. They are a box spring with a two foot thick foam mattress on top. They are five feet long and covered with more dust than a newly unearthed sarcophagus in Giza. Did I mention they are on wheels? When you lay down in one you know you will awaken poorly rested, with a wheeze from all the dust, your legs hanging over the end of the bed to the knee, and the bed itself displaced at least two feet from its starting position. At least she gave me a blanket the size of a bath towel to cover up with!

The next morning I woke up at the crack of dust-induced sneezing fit (very much before dawn) and hurried down stairs to start getting ready to go. My grandmother was awake since it is some sort of written law that all people over the age of sixty have to get up at like four in the morning. She went through a long list of things she needed to do while I waited patiently and helped where I could. My grandmother is one of the sweetest people I know. She's a bit out of touch with the times (she always calls homosexual people "a gay", as in "I think he is a gay.") and technology (she got her first VCR three years ago), but I can certainly forgive that. She is very easily upset though. Last Christmas I was in the process of separating from my wife and I made a point to reassure her that things would be much more pleasant this Christmas. I explained that I wouldn't be punching walls and throwing burning furniture out windows, that I wouldn't be half drunk and rolling around on the floor in my underwear, that I wouldn't punch her and then cry myself to sleep in the corner. Not that I ever did those things.

The drive home was rough in a different way than the drive over. It was uncomfortable to talk to her at times, especially since about half of the things I could talk to her about revolve around the Internet.

Grandma: So what are you friends up to these days?

Me: Oh, well Robert is still at college, and Ben and Dev are still around here. Amy is here for another semester then she might transfer. Lowtax is still in Seattle, I talk to him all the time about the web site. SexyGurl75 and I are getting along really well too, although if things don't work out xX R4v3rQu33n Xx and I can always get together. Then there's this creepy girl who I think is an old man who keeps ICQing me for naked pictures, and the people on IRC still think I suck.

Grandma: I have no idea what you just said.

Me: Just pretend I said "My life is a hollow shell of humanity occupied with staring at a low radiation monitor and smoking cigarettes waiting until I die from some strange jungle disease."

We stopped for lunch at a Bob Evans, a welcome relief to both my sore "drivin' foot" and my aching nicotine gland. Staring across a half eaten plate of grilled cheese at her I wondered how a world could produce two people so closely related yet so completely different. The stories she related ad infinitum about her youth and years gone by didn't really sound all that different from my childhood. Sure, different events and lower technology, but have we changed that much? I pocketed a mint at the register and carried on with our voyage, burying my concerns about our differences as quickly as anyone avoids any deep problem or difficult question. 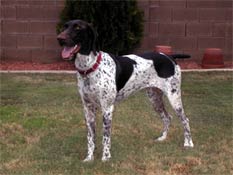 My attempts to search for pictures of my ex on Google yielded this. I don't think it's her, but she could have changed some in the past year.I got to my parent's house safely and spent about an hour helping her unload and unpack stuff from the car. Then I returned home to my apartment to jot down some notes about this little adventure and catch up with my group of friends who are almost always around; the ones on the Internet. It was an hour or so later that I got a call that just added more sunshine to an already odd and somewhat depressing Christmas. My ex wife had called my parents to inform them that she had cleaned out my bank account while I was on the road, maybe even while I was staring over that grilled cheese at my grandmother. It wasn't a lot of money; I had already emptied all but the amount of a few outstanding checks from it with plans on closing it once they had cleared. Yeah, it was my fault for not closing it six months ago, but I really didn't consider it a priority since she had left behind her ATM card and check book.

I figured out which check still hadn't cleared by calling the bank's 24 hour support line (she had closed my account leaving me unable to check my balance online) and talked to the friend who it was written to. I told the bank to stop payment on any checks and forked over cash to my pal. Not a big problem, but just all in all a great way to get things started for Christmas.