Balloon Boy, a weary nation turns to you in its darkest hour, and in your remarkable tale it discovers truths about life and helium.

This is where soft, meandering piano music begins. 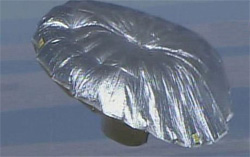 Balloon Boy, you teach us to dream on a grand scale. For years, we have stubbornly focused on small, brightly colored balloons, the sort you see at birthday parties and state funerals. In our arrogance, our collective tendency to believe that whatever we are doing is right just because we're the ones doing it, we failed to grasp how narrow-minded our approach to floating objects has been.

By your example, our worldview has expanded. We now know there are also balloons that are slightly larger, and that these balloons can be made of foil. Foil that is reflective, which isn't a color at all.

This is where a playful mixture of wind instruments join the piano as it picks up the tempo.

Balloon Boy, when we believed that you had climbed aboard that balloon and untethered it, our imaginations were captured like never before. After all, if a plucky child of six years can reach the heavens with little else but courage and irresponsible parents, nothing is beyond the reach of a single person.

This is where all music stops, save for the slow beat of a large drum and the plaintive cries of a single violin.

Balloon Boy, when the wreckage of your balloon was discovered without you, the breaths of millions caught at the exact same moment. It was 9/11 all over again. It was Pearl Harbor and the assassination of JFK and the release of Spore all rolled into one. From riveted enthusiasm to heartbreak in mere seconds.

In your presumptive fall from grace, we were reminded that the universe is brutally indifferent. Life's blinding brilliance is but a momentary flash, like a disposable camera going off as CM Punk kicks the Undertaker in the face on top of a 20-foot ladder, sending him to the canvas below.

Never again will we take life for granted. As we text messages to our loved ones from movie theaters like "now ppls faces n butts r bein sewn 2gther", we will make every jumbled word count.

This is where the entire string section kicks in with an uplifting swell.

Balloon Boy, when we found out that you had actually been hiding in your attic the entire time, and that you had never been in the balloon, a flood of relief cascaded from New York to Alaska and Hawaii was finally submerged.

At the conclusion of the very same day that your father believed you to be dead, he chose to celebrate your life by spending time with you in a series of television interviews. This comforted us, as we know that all television (even the news and reality shows like "Wife Swap", the one your mom and dad subjected you to earlier this year) provides us with a narrative that we are often times incapable of seeing in real life.

In this case, the narrative told us that you must have been confused when you said you hid in the attic because your parents "said we did this for a show". When you were woken up early the following morning to do more interviews, a tv person asked your dad about that comment and you vomited, almost as if something was bothering you. Since your dad loves you so much, he wanted you to stay on tv with him after that, and when you threw up a second time his resolve held fast when most parents might have let concern for their child's well being get in the way.

This is where every instrument joins in a life-affirming version of the soft piano music from the beginning.

Balloon Boy, this event has brought us together more than any other story this year. Our nation was in a state of decline, but our fascination with your story proves that we are heading in the right direction now. Just think of the heights we'll reach.