Blue Stripe: The Life and Times of a Power-Up Deliveryman 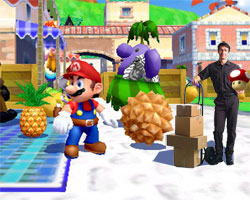 Hell ain't on earth, but I'm livin' it.Been married to Kathleen for fifteen years. Works at a little shop in River City selling waffles and pancakes to the square-head thugs that run that town. She may tell you that smiles are free, but they ain't. Not for me. I'm lucky if she blinks when I get home from work.

My boss tells me the guy who did this job before me moved off to some sort of crazy island in the Pacific. Sun, sand and a bunch of chicks in bikinis playing volleyball all day. Works in the item shop there selling lotion and crap. Yeah, right. If that guy was anything like me then he shot himself through the heart and prayed that was the end of it. I'm weeks from doing that. I even got the gun all picked out: it shoots a really thick laser beam that goes through walls. I can set it on my kitchen table and kill myself in the living room.

Anyway, this is some sort of work log bullshit that no one is going to bother to read, so I might as well get on with it. Been a busy week, which ain't never a good thing.

Whoever said the worst thing you can do to a man short of killin' him is rape has never delivered fresh human organs in Hyrule. I hate Hyrule. It looks like the sort of thing that would be drained out of Walt Disney's cadaver at a funeral home. The people are chirping hydrocephalic mongoloids, every door is about a foot too low for me to walk through and the days last like an hour. Then there's the hearts. Most places banned live organ deliveries years ago, but not good ol' Hyrule. We're still getting 500 to 1,000 human heart requests per week. Last year during a heat wave I had to deliver almost 10,000 human hearts to a retirement home in a tree. Buy some fucking air-conditioning, you horrible ghouls!

So I get to Hyrule and my delivery address takes me to a barn. I'm thinking "great" because usually that's the sort of place I can just pop in, drop the guts and leave. Of course it wasn't that easy. I've got some old lady screaming her head off and there's this little guy in a green suit chasing chickens around. He'd get along great with the neighbor kid who chases the pigeons. The one with cerebral palsy. I open the foam packing and there are three hearts inside. Three hearts, for little buddy eats-with-spoons. Three human beings gave their lives so that Chickenchaser gets to walk into swords. Ain't no justice in this world. 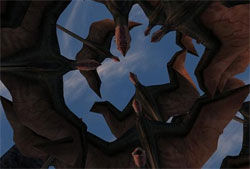 Oh, sure, here's something we need more of!10:02 AM - Vvardenfell
Delivery: Live Animals

Never been to Vvardenfell before and after today I absolutely never want to go back. First off: no trucks. It's one of those fantasy lands like Hyrule which means I have to leg it because head office ain't handing out horses (found out later horses are banned there too). So I'm like, alright, because most delivery areas are only like a block or two anyway. Then I get handed this scroll that says I have to deliver my package - which is a gigantic squawking crate full of these things called cliff racers - all over the place. Right, fine, see the sights. But it takes like a thousand years to get across this horrible place.

Worst of all, everywhere I go someone has already delivered cliff racers. Turns out there was some sort of order mix-up and they got quadruple delivery. If I never hear "Muthsera" again I can die a happy man. Well, maybe not happy, but you get the idea. I also accidentally killed some sort of Dago-Urp dude which I guess is like the god of Vvardenfell or something. I thought he was some sort of crazy clown and I hit him with my pepper spray and he just dropped dead.

One thing about UNTACO Headquarters: expect the unexpected. I walk in and it's absolute pandemonium. There are potted plants blocking doors, people shut into bathroom stalls, broken vending machines and a guy in a black trench coat standing on the head honcho's desk shooting him with some kind of futuristic Taser. The place where I'm supposed to drop off my health packs is blocked by an overturned soda machine and it takes me half an hour to move the damn thing out of the way. Oh, sure, there are ten super-strong cyborgs walking around and starting up strange conversations with me, but none of them ever seemed interested in helping me move the fucking vending machine. How the hell are these guys supposed to be catching terrorists? I've seen more competence at the Rainbow Six MOUT and that was just some dude throwing stun grenades at Ding Chavez over and over.

God Russia is depressing. I don't even know if it's Russia, but it used to be a part of the USSR. The whole place is run down and surreal. There are a few people here and there but mostly it's just this empty ruin. Like everyone died and just left the buildings behind to rot. I've got to keep a tight schedule on this one because there's some circus strongman hot on my heels. He's collecting letters for some reason. Don't ask me, they don't tell me why and I can't possibly come up with a good reason. Complicating matters are these floating Yoda things that shoot crap at me. They're like Russia's version of mosquitoes or, even better, those goddamn cliff racer things I had to deliver all over Vvardenwhatever. Only creepier, because at least those things didn't stare at me. These things just look right in my eyes and float towards me. I ended up leaving a whole pile of K's in a dumpster. Hope the crazy circus dude didn't really need them for anything. 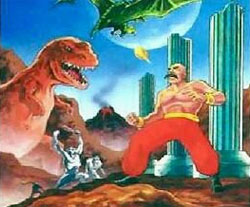 Rampant ninja related crimes these days…well, that's not going to stop a deliveryman like me! No, a deliveryman like me gets the thankless task of dropping individual cans of soda on top of moving vehicles on Interstate 5! Jubilation! At least there aren't any ninjas attacking m- oh wait, there are! Triple jubilation! These rabid ninjas apparently try to dart the Christ out of anyone not wearing tabi or throwing smoke bombs. Trust me, I've met a lot of ninjas in my line of work, and nothing is worse than trying to set soda cans on the back of a semi doing 50 on an interstate while some ninja is shooting darts at you. I guess there were some really bad dudes cracking ninja skulls somewhere upstream in traffic, but I never saw them.

I dodged the ninjas, dropped my sodas and got to the end of the line and who do I run into? The crazy Russian strongman. I ask him if he got all the K's I delivered and he thanks me. No, wait, no one ever thanks mean. I meant to say that he shot fire at me and started hopping around. The least he could do is ask me if I wanted to go get a burger or something…ha ha ha ha!

Ugh. I hate my job. I hate my life. I didn't even get into the fucking blocks. God DAMN those fucking blocks. Every single time I get called in for a delivery in the Mushroom Kingdom I've got to get my delivery item into a stone block. Do you have any idea how hard it is to put an 80lb mushroom inside of a fucking block of bricks? How about a giant mushroom that watches you? Got any concept of that horror? No, you don't, because you assholes just run around smashing the goddamn blocks open and killing turtles. Great folks.

It's the easy life for…you know what, I'm going to get shitcanned if I take this thought to its logical murderous conclusion. Just watch your back, Mario. If you call me one more time…one more time…well, let's just say I had to restock the store in de_dust and I didn't walk away empty handed.