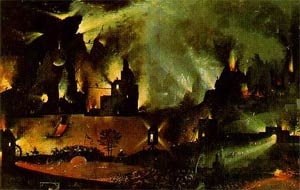 This is all that remains of the future!The year is 2047 and plumes of roaring black shred the sky to pieces and shadow the ruins of Neo Vatican City in an almost satanic black. The gargantuan space creature, having adsorbed the energies of the Meta-Pope and metastasized itself to the hull of the X-88 Supercarrier, would now be unstoppable. Since being freed from its crystalline cocoon beyond the veil of time and space, it has devoured entire continents and dealt mankind a swift defeat. Now it would cook the remains for one last feast. But that is then. Let us focus on now.

There is a monster snaking along the edges of this nation, creating a massive chalk outline that divides the good from the bad, the living from the unliving. It is our border, and it is all that protects us from scarcely speakable evils such as Mexicans and Canadians. The U.S. Border situation is one of grave concern in this day and age of Post-Alamo America. Since that fateful day in 1836 when a large group of Mexican immigrants illegally crossed the border to rob the Alamo, Americans have been wary of lax security. Another Alamo would be a crippling blow to American morale, with wounds still fresh from Mexico's cowardly attack. Thankfully it seems these concerns are finally getting answered as renewed interest in border security has put America's crusty exterior back in the limelight. It is important we have this debate, because many Americans are still suffering from a Pre-Alamo Mentality.

New efforts to curtail border crossings include Arizona's Minutemen, a ragtag group of citizens voluntarily protecting Arizona from invasion, and new legislation strengthening security measures at official border crossings and airports. Within the next few years, everyone, including Americans, will need passports to enter these United States of Right Here. Both measures are not without controversy. The first measure because it seemingly assigns the protection of a large section of the U.S. border to a group of Arizona vigilantes. I ask you, what's to stop these vigilantes from donning masks and costumes? And if it comes to that, it's only natural that the immigrants will respond in kind, creating a cycle of costumed violence. Do we really want our borders looking like a freak show? It seems all but inevitable. Requiring passports for entry into the U.S. is not going to be without problems, since few Americans actually own a passport. An official passport – not one of those cheap ones you get from the flea markets – costs about ninety dollars. Most people would just as soon stay in America and spend ninety dollars on a tank of gasoline.

These initiatives are aimed at boosting safety, because at any given moment a terrorist could cross over from Canada to scare the ever-loving crap out of us. A terrorist could also sneak into the U.S. a million other ways, but if all goes well, they will have to do it some new way experts did not foresee or plan for. This will also help curtail the number of immigrants sneaking in from Mexico to steal the low-paying undesired jobs we prefer not to acknowledge. We can't just let anyone clean our toilets.

I'm no expert on border safety. I do cross the border fairly often (mostly to stock up on maple syrup and freshly cut logs), so I can say from experience that our borders are pretty weak. While it's not as easy to return to America as it is to leave it, it's still a pretty quick and largely inexplicable process consisting of a few random questions and some minor arm waving. I see no reason to change this, because it seems completely pointless and ineffective, and therefore perfectly American. I'm sure border guards are quite skilled at picking up strange behavior, but I'm also sure terrorists probably find other ways to get around. Granted, our policy is still more effective than Canada's policy of giving everyone who enters a free Flexfit hat, a thermos of soup, and the promise of a logging job, but no one has any real interest in blowing up Canada. There are some good explosions to be had there, too. Anyway, I'm not rambling here just to get my name flagged on watchdog lists, I'm here to help. I've prepared a few valuable suggestions on how to take charge of the situation. 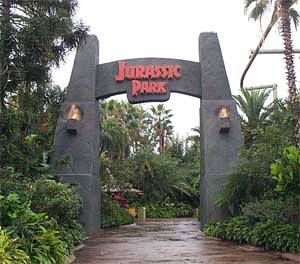 A typical U.S. border crossing looks like this, only it usually says "USA" instead of "Jurassic Park" due to copyright issues

Eliminate knowledge of other countries. If we stop educating our youth that a world exists beyond the U.S. border, they will have no desire to seek out other nations. This will cut down on unnecessary travel and help reduce the spread of evil foreign ideologies. We will also request to be removed from maps and globes elsewhere so that other countries forget we exist, and therefore don't try to talk to us. Believe you me, muchacho; this plan is just crazy enough to work.

The U.S. government could continue to make America unappealing to foreigners, thereby stopping all immigration while simultaneously promoting emigration from frustrated Hollywood actors tired of supporting bland Democrats. Alternatively, we could just wait until our economy collapses in a few years, making us unappealing by default.

Roll out a hip new marketing campaign and slogan, such as "kindness stops at the border!" People like slogans, and will learn to obey them.

Begin referring to bordering nations as "The Zone." Entry will be strictly forbidden, but it is rumored that shadowy men experienced in stalking these alien landscapes will lead you into the heart of The Zone to a white room where your deepest desire will come true. For a price, of course.

Follow the South Korea-North Korea model for a safe, successful boundary by creating a demilitarized zone along the Canadian and Mexican borders. Ten miles of landmines, snipers, and propaganda towers will wipe out illegal immigration quite nicely. Plus this would make for a real moneymaking tourist destination, with people scrambling to buy t-shirts and cigarettes from the Duty Free of No Return.

I had this weird dream one night where the government built a missile for every person on the planet and then implanted a chip in every person that matched up with a missile and then whenever someone did something wrong the missile would track them down and kill them. I think this could be done fairly easily.

Or, we could just leave things as is and accept it's not a perfect system, but one that more or less isn't horribly broken. I say we do that and focus on more important things, such as cloning Terri Schiavo.