At a Glance: I've noticed the ROM Pit has had a disturbing lack of dinosaur-related material lately, so this week I've decided to go all out and provide you with dinosaurs that are also spaceships and laser cannons and possibly penis analogies. Unfortunately, DYNOWARZ: Destruction of Spondylus lacks the sophistication I'd ordinarily expect from a dinosaur-related title. It's pretty obvious that they've geared this toward kids, which is ridiculous. Dinosaurs are absolutely not for children. They have godlike strength, teeth the size of machetes, and are known to lapse into long, boring stories about their childhoods whenever you ask them a question.
Platform: Nintendo Entertainment System, 1989
Know a terrible ROM? Email me! 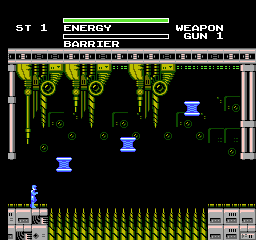 His jump is so bad you actually save time and health just sprinting across the spikes.Story: It's tempting to write off DYNOWARZ's plot as being "for kids," but you really have to appreciate that it manages to be juvenile on a Wagnerian scale. A whole such as DYNOWARZ cannot be appreciated as merely the sum of its parts! Let's break it down into key components:

Got those written down? Now you can come up with the mathematical equation for the most conceivably 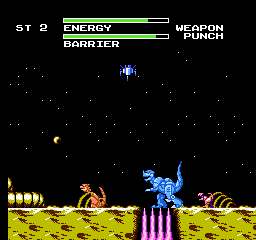 There is certainly no shortage of robot dinosaurs, here!immature plot in the history of the universe! I like it though, because it's the innocent kind of endearing immaturity little kids like, at least for the most part. Gonna have to concede that "Spondylos" sounds like something that kid from high school would shriek in the hallways between classes to show off how "zany" and "random" s/he was. That kid was me, incidentally. I'm sorry about it, but are you really surprised? I review 20-year-old video games on the Internet.

Gameplay: The inevitable portions wherein you play as a dinky human suck, mainly because your spaceman jumps like a bullfrog with a cinder block nailed to its tongue. However, once I got into my KILLER ROBOT SPACE DINOSAUR, I was stunned to discover that, for all of its flaws, DYNOWARZ is not that terrible of a game. It consists primarily of moving right and exploding the fuck out of any other sprite I happen to see which also has fuck-exploding powers, which of course is not a terribly original concept. But hey, at least they don't butcher it, which is more than I can say for most of this shit. Plus, its collect-and-power-up system of weapons manages to be blithely amusing, though nothing to interrupt your D & D session for.

Honestly, I couldn't hate DYNOWARZ for the same reason I can't hate Harry Potter: they may be almost completely void of originality, but they're excellent at being mindless, inoffensive sources of entertainment. Sure, I didn't experience any personal growth when I was done with either, but at least I don't have the urge to let a dog fuck my newborn half-vampire honeymoon baby.

Graphics: I'm handing out my approval, even though I've only prepared to analyze 8-bit depictions of KILLER 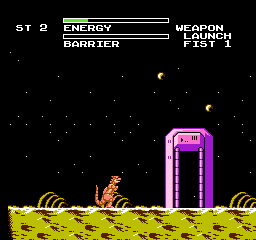 Also no shortage of art! ROBOT SPACE DINOSAURS in my wildest fantasies. Admittedly, the backgrounds aren't exactly anything to write home about, but if you're the kind of 6-year-old boy that this game was aimed at, you've got too many Pop Rocks in your blood stream to be literate anyway. Obviously, this kid is not going to ask himself about the god-forsaken backgrounds. He is going to ask himself, "Are these KILLER ROBOT SPACE DINOSAURS?" and "Are these KILLER ROBOT SPACE DINOSAURS blowing everything on-screen into a completely different realm of being?" DYNOWARZ satisfies these strict criteria admirably, and does so with sprites that are even kind of good for 1989. I bet you could even print up some spectacularly ironic t-shirts featuring them!

Difficulty: If you are looking for an X-TREME gaming experience, you're better off sticking with a magical loli shoot-em-up or whatever the hell the hardcore kids play these days. But after playing through twelve billion games starring ninjas / werewolves / secret agents / cavemen / the human lung, it's refreshing to see a game for children that isn't either inexplicably impossible or "go right for sixty-seven screens."

Though the level of strategy involved in choosing your weapons is generally pretty inconsequential, it's just enough to fool a little kid into thinking that his brain cells are good enough to process something other than DO NOT POOP ON UPHOLSTERY. Even though games were aimed almost exclusively at kids back then, it's rare that I play a quasi-decent one that is also at the level that, say, a small child could figure out. So I'd go ahead and give a little kid DYNOWARZ to play with, unless I wanted to instill within him an early appreciation for profanity, in 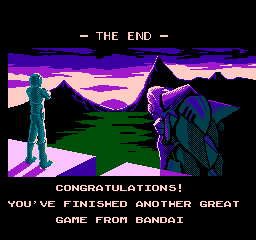 Or BLATANT UNTRUTHS! which case Megaman 3 all the way.

Fun: I liked DYNOWARZ with only a dash of buck-toothed irony, and I almost wish more games were like it. Modern games are too often a confused clusterfuck, struggling to convince people that they're a "grown-up" form of entertainment without alienating the key Lonely Virgin demographic. So for everything genuinely clever that you see in game, there are six hours of lovingly detailed spewing entrails and panty shots. It was nice to see that, in days of yore, inanely immature concepts were inflicted specifically onto children, who at least have a conceivable excuse.

Defining moment: DYNOWARZ isn't without its annoyances. The human's leap had spunk, but the mech's jump is about as aerodynamic as you'd expect from a 20-ton hunk of scrap metal. It's tricky to leap over gaps at all, but the game-designers decided to position mines on the edge that will blast you right back into the hole. You really don't have a lot of room for error, here. Infinite continues came in handy, but just as I thought I was beginning to get the hang of how to jump properly (no), the mine disappeared when the level loaded. That's right: the AI not only automatically adjusts, but comes equipped with exasperation, finally ceding that "fuck it, you're dumb." I wish you could get that kind of guidance in prescription medication.