The TV Shows That Died Young

Brian Bosworth's ridiculously arrogant "Boz" character, a construct of his agent, was a pro-wrestling personality thrust into the NFL. The Boz was a precursor for other cartoon figures of athletics like Terrell Owens and Chad Ochocinco, but he never really produced on the field. After a series of injuries he ended up in Hollywood, appearing in the roles too daunting for Howie Long.

The 1997 Fox network original Lawless had Bosworth playing a South Beach PI who takes on the cases the cops pass up. Terrible ratings put it out of action after the pilot aired.

I couldn't track down any footage from Lawless, but instead enjoy this scene from the classic 1991 Brian Bosworth vehicle Stone Cold, in which a bunch of junkies rob a grocery store and shoot machine guns at tortilla chips until Bosworth arrives, looking like modern Val Kilmer making a craft services run on the set of an Underworld movie.

The titular joke of this ABC sitcom was outdated years before Dot Comedy aired. The show featured host Annabelle Gurwitch and field reporter Katie Puckrik sort of making fun of nerds in a no-budget news format. The skits looked suspiciously like they were put together by Jay Leno's Tonight Show writers. Lots of terrible prop comedy and making improv come off like it was read from cue cards.

The quality of the show was on par with a late night vitamin infomercial on CMT. The ratings were about as good. Died after one episode.

Not every show is cancelled just because of bad ratings. The CBS reality show The Will pitted wealthy businessman Bill Long's family and friends and some random hot chick with big tits against one another in various physical challenges in order to become the sole beneficiary of Long's will. Variety described the challenges, which included contestants placing their hand on a safe for hours on end, saying "[they] exhibit a level of excitement normally reserved for waiting in line at Home Depot." 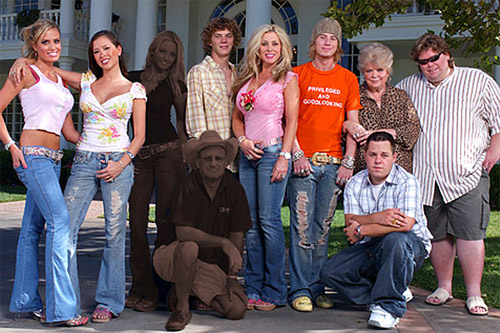 Originally shit-canned by ABC before it got off the ground, CBS picked up the concept and created this stinker. It was dogged by controversy and debuted to the lowest ratings of any CBS show that week. It went on to air on Fox Reality Channel.

Okay, TV, just stop. You don't need to make anymore TV shows because you made this. A pathetic grasp at relevance by every single person on the show, Secret Talents included such gems as country singer Clint Black (coached by Gary Shandling) performing a stand-up routine, Cindy Margolis performing magic and Ben Stein dancing the jitterbug.

"What do all of these celebrities you see here have in common?" asks the promo. Their careers are flat-lined. The show debuted to horrible ratings. It was announced as an eight-week reality contest, but it was put out of our misery by the bumbling CBS network after just a single episode aired.