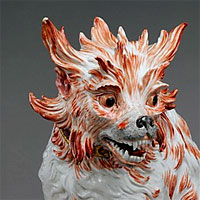 Over the years I have brainstormed a large number of names for imaginary dogs. Some have appeared in my various dog-related fictions such as Barkwire, Kennel Fair and Dog Classifieds. Others have remained in my personal spreadsheet, accessible only to my most trusted colleagues. I now open this vault to the general public, in the modest hope of making better the lives and esteem of tomorrow's dogs.

If your dog is called something other than one of the names on this list, then it would be a good idea to have a talk with that dog. Say, "Dog, you are to be known by a new name from now on. Adapt... or perish." Then begin calling your dog by any of the following 200+ names guaranteed to imbue it with above-average characteristics and grandeur. I will leave you to figure out which names are appropriate for which genders.

Although I loathe children, any one of these names would also be perfectly appropriate for a child.

NOTE: The following names are intended for use only on dogs of respectable stature, mass and appearance. Do not attempt to use one of these names on a dog that is tiny, small, burdened with exceptionally curly or effeminate hair, or is otherwise hideous in a way that does not commend respect. It will result in a fatal hardware failure.

Additional praise be unto David Thorpe and Tom "Moof" Davies, for without them this list would be somewhat shorter.