To many folks, Something Awful's brand of "comedy" is too Internet-centric and well… scary. And to this I say, "yeah, that's what your mom said last night!" See, now that was a joke everyone can understand and appreciate, because everybody has a mom. Sure, she may be rolling around the stomachs of maggots, but that doesn't matter. The point is that the mainstream audience can relate to that joke because everybody knows about moms. But if I had said something like "that's about as entertaining as den.net in a day care center," not many people would understand the reference since den.net was a stupid dot-com with a child-molesting CEO. Plus it's somewhat offensive. And if I said something like "Kurt Warner is passing like proposition H-248A in Grover Cleveland's second administration," I'd be Dennis Miller on Monday Night Football.

So in a concerted effort to make Something Awful more acceptable to your average soccer mom or steelworker, I've decided to do an update full of socially acceptable humor, free of any crass Internet cynicism or pictures of dead babies being eaten by deformed kittens. It'll make us more marketable. Enjoy!

People love TheOnion and stuff right? Well, we can do that!

ROCHESTER, NY - Local pizza delivery man Jeff Godwin found himself in the chewy caramel center of an embarrassing social faux-pas late last night when he foolishly confused Hollywood big shot Joe Pesci with fellow Italian-American actor Danny DeVito. "Danny DeVito!" Jeff cried, while eavesdropping in on a conversation between five fellow partygoers. "He was great in 'Home Alone'! I love the part where he burns his hand on the doorknob! That clever little boy… what was his name… Elijah Wood?" After an awkward pause, U of R graduate student Mary Saffron, 24, correctly pointed out that Joe Pesci portrayed hapless burglar Harry Lime in the 1990 Macaulay Culkin blockbuster, while Danny DeVito is best known for his challenging portrayal of the Penguin in 1992's "Batman Returns." This is the Godwin's second discomforting blunder in as many weeks, following ill-fated attempt to purchase a Big Mac hamburger sandwich at a Fairport Burger King drive-thru window.

Something that silly would never appear in a real newspaper! Tee-hee!

Here are some funny jokes I was forwarded in the email!

Did you hear about the blonde who brought a large thermos with her into Starbucks and asked if was big enough to hold six cups of coffee? The counterman looked at the thermos, hesitated for a few seconds, then finally said, "Yeah. It looks like it would hold six cups to me."The blonde said, " Good. Then give me two regular, two with cream and two decaf, please."

Those are fine jokes, good Christian humor, but I can do better!

Hmmm… this isn't as easy as I thought. I'll try again:

Close but no cigar! I'll try some workplace humor. It works for Dilbert…

Guy is talking to his boss says, "Golly, that's a pie in the sky idea! Impossible!" Boss says "Oh you think so?" Guy says, "I know so!" Boss hits him in the face with a pie and grins, "Now the pie has fallen back to earth, so get busy!"

Ah, there we go. Some good clean corporate humor. Share that one around the water cooler, white-collar slaves!

Here's a cute funny picture my mom forwarded to me!

Aww! See, they're trying to use the dog door together! 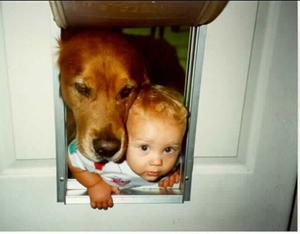 Here's a funny picture I made: 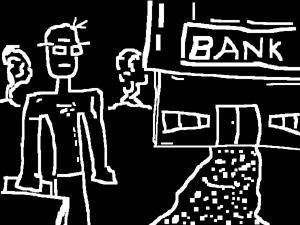 ... OK, so I'm really tired and I got distracted and started thinking about banks.

Subject: A MESSAGE FOR BIN LADEN

Osama Bin Laden, your time is short;
We'd rather you die, than come to court.
Why are you hiding if it was in God's name?
Your just a punk with a turban; a pathetic shame.
I have a question, about your theory and laws;
"How come you never die for the cause?"
Is it because you're a coward who counts on others?
Well here in America, we stand by our brothers.
As is usual, you failed in your mission;
If you expected pure chaos, you can keep on wishin
Americans are now focused and stronger than ever;
Your death has become our next endeavor.
What you tried to kill, doesn't live in our walls;
It's not in buildings or shopping malls.
If all of our structures came crashing down;
It would still be there, safe and sound.
Because pride and courage can't be destroyed;
Even if the towers leave a deep void.
We'll band together and fill the holes
We'll bury our dead and bless their souls.
But then our energy will focus on you;
And you'll feel the wrath of the Red, White and Blue.
So slither and hide like a snake in the grass;
Because America's coming to kick your a--!!

So I suppose I should post some inspirational garbage too, so you can mail it to your Bridge club or whatever.

Subject: HOW ABOUT KILLING YOUR SON

Your son is a loser and sits in the basement;
Stupid lazy faggot, why hasn't he cleaned it?
Yeah, that's right, he's gay, I saw him last week
He was selling off blowjobs for $5 a piece.
He's committing crimes against God, and it's your entire fault,
So you're going to hell… like… by default.
The only way to be a good Christian is to find your gun
God says it's OK to kill, as long as you're not having fun
Walk into his bedroom and fire fifteen shots,
If you don't he'll turn into a killer robot.
Make sure that you wear gloves or mittens,
Or dead babies will be eaten by deformed kittens.

Sorry, this just isn't working out. I'm not funny to begin with, and trying to write gags for this crazy "mainstream society" is just a little out of my league.