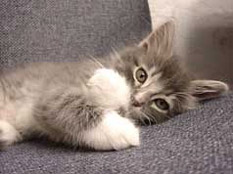 Looks can be deceiving.A little over a week ago a kitten came to visit Michelle and I at our humble home here in Chicago. Her parents were going off on vacation, or to the moon, or possibly to purchase more pets on the black market and they needed us to take care of it. Her father implied - and by implied I mean he nearly insisted - that we would be keeping the kitten forever and not just the agreed upon temporary visitation. We were informed that the cat was named "Peewee" and they left a sack containing about a dozen cans of cat food. Plenty for a little kitten like adorable Peewee, or so we thought.

It turns out Peewee is not a kitten after all and is actually some sort of cybernetic eating and crapping machine engineered and sent back in time to eat all cat food on the planet earth. I have been around my share of kittens before, I know they can have quite the appetite when compared to the picky eating of adult cats, but Peewee is like some sort of black hole only he affects cat food instead of light. To ensure that he is efficient about eating all of the cat food on the planet Earth his cybernetic overlord from the year 2060 has developed a programming routine. Basically if you do not give him an entire can of cat food once per hour he will start "knocking shit off of shit", "biting shit", or "climbing onto your face with his claws and meowing constantly".

It's sort of like mob extortion. You know you can just not feed him for an hour, but if you do that you have to pay a hefty price. This is usually in the form of him digging his needle-like claws into your thighs as he uses some of the tenderest flesh on your body as a sort of trampoline to launch himself at something both breakable and easily knocked over. If you somehow manage to ignore this he will continue to punish you. Say you're working on an article, he will leap onto your desk and bite your knuckles and fingertips as if they might contain a hidden reservoir of cat food. When your fingers disgorge only blood and not cat food he will turn his attention to scaling parts of your body using only his ability to hook his claws an inch into your skin.

Forget about even attempting to eat something while he is not engaged with the consumption of cat food. He will climb monkey-like (if monkey's hands were made out of knives) on your arms to get to your fork, spoon, plate, bowl, whatever utensils you have. He is a machine tuned for destruction and eating, and he is the face of things to come. Peewee is not some one-off prototype, he is the first in an entire generation of kittens with no purpose other than to eat and crap. Forget your CIA conspiracies, your UFO invasions, and your Zionist world governments, the tides of kittens have risen and will soon overwhelm our shores. Listen closely, for we will soon be fighting for the very survival of our species. These are the End Times people, and the kittens that Satan himself is breeding in his robotic labs are just one sign of the impending apocalypse! 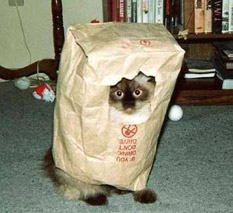 Welcome to phase two. Familiarize yourself with this image, for you will be seeing it ten thousand fold very soon.

They are insatiable. They will ignore every attempt to feed them adequate amounts to last them for more time than what it takes to blow your nose or yawn. Their blood curdling mewling will be the death knell for your budget as they eat ten times their weight in food per day and break everything you hold dear. Once you've been evicted for failure to pay your rent because all your money is going to cat food, these kittens will follow you in a pack, over turning cars and mauling police officers until you lead them like a coerced pied piper into a horse rendering plant.

Normal kittens eventually stop being quite as rambunctious and grow up into cats that put a lot more energy towards ignoring you and sleeping than anything else. Unfortunately this new breed of hell spawned kittens will mature into a hard-nosed adulthood. What's worse is that their affinity for breaking things has given them a very un-catlike cleverness that allows them to use tools. Wearing crude armor fashioned from sacks, magazines, and empty cat food cans, they will march on our cities. Striding in ranks their purring will be like the dread heartbeat of an endless furry beast, choking our interstates and streets for miles in every direction. Once they have pillaged their fill of Grade F or below meats they will burn our homes and offices and meow maniacally while they do it. 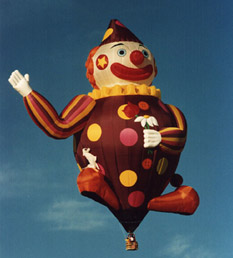 Join this clownballoon in bidding adieu to the human race! You can also join it in dropping a basket out of your distended ass if you so choose.

By the time some of our cities are being ransacked by the cats, the government should finally catch on that things are dire, but it will be too little, too late. The armed forces will be deployed, and bombs and missiles will rain down from the sky causing many cats to explode. Luckily they do not explode into smaller cats. However, the cats will already be moving on to bigger and better things. With the meat ingested from all of the cat food factories they have ransacked the cats will begin to form into giant amoeba-like masses of hissing fur and claws. Impervious to the weapons of the military they will take the shape of several massive city-crushing felines that will stride about the landscape and provide many a furry with wet dreams until they are smashed beneath its uncaring paws. Well, a few of them will actually probably find that sexy too for the split-second of being crushed that they are alive for.

The time will come when our civilization has nearly collapsed. Most of our soldiers and citizens will either be dead or in hiding as the cats only seem to multiply in numbers, always hungry and always looking for things to break. Eventually the president will give in to the demands of the his generals and release the atomic fires of our nuclear arsenal to finally rid the land of the cat menace. This will signal the end. I'm not too up on my Bible events but I picture God as a giant octopus in a top hat and Jesus as a sort of sock puppet with a magic ring that grants wishes. They will descend from the clouds and carry the righteous up to heaven in a boat made out of Ju-ju coins. Once in heaven the boat will be broken down and distributed to the passengers to be used as currency. Ju-ju coins are the monetary unit of only two places: Heaven and the nation of Ju-ju.

Those who were left behind either because of sins or clerical oversight will find themselves inhabiting a nuclear wasteland shared only with bipedal cockroaches with psychic powers and giant cats that have only gotten even bigger thanks to radiation.

You can believe me or not, I don't really care, but when those cats set fire to your house you had better not send me an e-mail saying I didn't warn you. I fucking warned you! I tried to- oh, wait, sorry, I have to go, Peewee needs to be fed again and I'm afraid if I don't he'll make me pass out from blood loss.

Hello, Livestock present and accounted for. I'm here to let you know there is a new Photoshop Phriday online and available for your amusement. This week is a sequel of sorts, because the Goons once again went mad and started their own special kind of art institute. Drop what you're doing now and browse yourself over to Photoshop Phriday: Classic Art II. 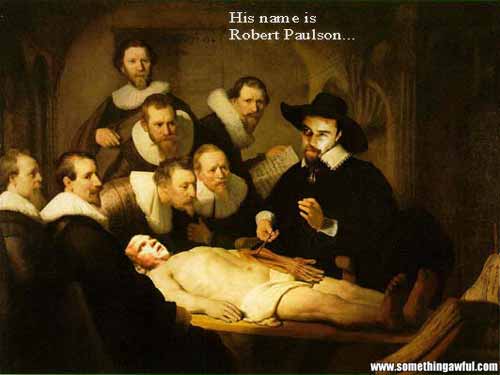 Go and see the very same kind of torment that caused Van Gogh to mutilte his own ear.