Enigma of the Ages: The Highway Shoe 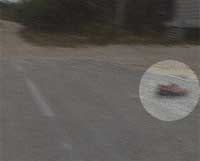 One of the first images taken of the Highway Shoe, circa 1979.

As noted hour after hour after hour on The Discovery Channel, mankind has created many wonders of the world. Fantastic structures such as Stonehenge, the Egyptian pyramids, and Jack In the Box have confused scientists for hundreds of years, causing them to relentlessly wonder "who built these?", "why were they built?" and "I wonder if I get a goddamn check for being on The Discovery Channel every 20 minutes, asking the same question over and over again and never finding out any answers?" Leading scientists, college professors, and various other bearded men swarm upon such mysteries of the unknown and attempt to unravel them by using a method known as "science." Enchanted Science Sticks and Science Guns are used to prod and poke various highly scientific objects, but when their hour of airtime expires, they find themselves no closer to unraveling the origin of UFOs, Bigfoot, or Louie Anderson. This is because there are some universal secrets mankind was simply never meant to unravel: such as the Highway Shoe.

Ever since both the highway and shoe were invented, the mystical Highway Shoe has been appearing to millions of people worldwide, often at the same time in completely different locations. Thousands of confirmed reports have been filed, each and every one describing "a single shoe" laying in the middle of the highway. How did it get there? Who's shoe was it? Why didn't anybody pick it up? How can somebody not realize they lost a shoe while driving? Witnesses of the fabled Highway Shoe range from respectable doctors, dentists, and lawyers to disrespectful doctors, dentists, and lawyers. For proof, here are just a couple filed reports that we here at the Something Awful Scientific Studies... uh... Yarn (I needed something that started with a "Y" so I could come up with the acronym "SASSY") have uncovered over the past year.

These two cases are just a few of the many, many, many reports that at least two people have filed over the past decade, describing in detail their experience with the Highway Shoe and the profound effect it had on their lives. A woman in Maryland claims her encounter with the Highway Shoe caused her to instantly go blind, while a woman in Baltimore insists that, upon seeing the Highway Shoe, her blindness was cured and she became able to lead a happy, productive life back in her home town of Maryland. While these cases display the remarkable effect the Highway Shoe has on human lives, they don't help us come closer to understanding the entire Highway Shoe phenomenon. As a result, SASSY has compiled the following informational package which we hope will not only familiarize you with the supernatural Highway Shoe, but also take up enough space on the front page to justify a daily update. 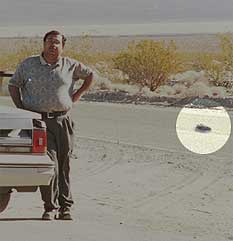 A rare glimpse of the Highway Shoe taken in Dirt Dunes, Arizona around 1996.

What is The Highway Shoe?

The Highway Shoe, simply put, is a ratty, filthy sneaker that is seen lying in the middle of most major interstates. Scientists have been unable to successfully carbon date the shoe to determine its origin, as the Highway Shoe promptly vanishes after it is seen. However, witnesses speculate that the Highway Shoe was born sometime in the late 1970's, as the color pattern and design witnesses describe match up with a popular line of running shoes manufactured in 1976. How this lone shoe was able to survive for over 20 years despite suffering extreme weather conditions and vehicular damage, is a complete riddle. US Government scientists have been actively pursuing the Highway Shoe in the attempt that they will be able to catch it, study its chemical composition, and then create nuclear tank armor based off the same substance.

The most common question people have regarding the Highway Shoe is simply "why?" Why is there just one shoe lying in the highway? Why does it disappear after a day and then show up in an entirely new location, miles away? Why does it insist on repeatedly appearing throughout major roads across America? SASSY has investigated many leads, interviewed hundreds or perhaps even the aforementioned two witnesses, and done considerable amounts of research, often in bars or other drinking establishments. We have hypothesized the following theories, all of which may help explain the motivation and mystery behind the Highway Shoe.

THEORY 1: The Highway Shoe is the result of a ghost. Leading ghost experts (also known as "unemployed people") have proven that 1950 was the most popular decade for ghost exportation. During this hectic 10-year period, thousands of teenagers participated in drag racing against other teenagers in an attempt to win the heart of a pretty high school cheerleader who would only date the person with the fastest and most fuel noxious car. These illegal races ended up with at least one of the vehicles flying off a cliff and exploding, usually in midair, as oxygen was a lot more dense back then and could easily rupture gasoline tanks. All these deceased drag racing greasers resulted in great influx of the ghost population, flooding the streets and highways with puffy white specters with packs of cigarettes rolled up in their sleeves. One of our Highway Shoe theories hypothesize that a dead drag racer known as "Great Greaser's Ghost" cruises the highways at night, attempting to keep other kids from speeding (and ultimately flying off a cliff) by pulling their foot off the acceleration pedal. Unfortunately, Great Greaser's Ghost usually succeeds in only yanking the shoe off his intended victim, covering it with ectoplasm and flinging it to the ground. This cursed shoe is then forced to eternally wander the mean streets of America while Great Greaser's Ghost continues his reign of terror, transforming innocent shoes into haunted footwear. 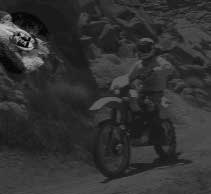 Biker Alex Walters was one of the first formally documented cases in which somebody encountered the Highway Shoe (upper left), blacked out, and woke up three days later in a ditch outside of Roswell.

THEORY 2:Mother Nature is turning against us. As popular Japanese Anime has taught us time and time again, the Earth is slowly trying to kill us because we use soul-destroying technological things like PDAs, combustion engines, and plastic Richard Nixon masks. Many members of the illustrious "white trash" race are to blame for the largest effronteries to Mother Nature, deciding to litter their yard with rotting cars propped up on concrete blocks and decorate their trailer parks with old milk jugs and used urine sample containers. On hot days, these white trash members usually drive around with their legs hanging out the window for reasons I'm still not exactly sure of. Mother Nature reacts by stripping them of their precious footwear and tossing it into the middle of the road. The white trash are unable to retrieve their shoes because their vehicles usually lack the option to go into reverse, and even if they did, the driver wouldn't be able to figure out how to work it. If this is indeed the case, we can only fear what fiendish tricks Mother Nature has in store for us next, such as hordes of flying turtles, man-eating flowers that grow from our sewer pipes, and red mushrooms that cause us to grow twice our size when we touch them.

THEORY 3: Highway Shoe is a supernatural entity like the Yeti or Santa Christ. Since Highway Shoe seems capable of traveling large amounts of distance in short amounts of time, we must assume that it has magic powers along the lines of the Lucky Charms Leprechaun or that little worm which was Oscar the Grouch's friend. We know that it has the power to disappear at will, as well as change shape and form, so the only logical conclusion we can irresponsibly jump to is that Highway Shoe is here to signal an incoming invasion of alien footwear. These Highway Shoes from another galaxy will attack by first cutting off major interstates and all passages of transportation. They will mark their targets with an intricate series of directional charts ground into cornfields, and will more than likely terrorize farming families if they're headed up by notorious farming sensation Mel Gibson. Luckily, these Martian Shoes can be repelled by throwing water on them, as even shoes on Mars are produced by cheap Taiwanese companies and fall apart at the slightest touch of moisture.

Despite these theories, I'm afraid we simply don't have enough information to determine what exactly the Highway Shoe is, much less the motives behind its actions. Its powers are immeasurable: it is immortal and can withstand nonstop damage from two-ton vehicles, it is capable of teleporting hundreds of miles seemingly at will, and it may or may not be responsible for the rise in popularity of that stupid movie "The Ring." Regardless, it is clear that scientists from around the globe will need to start stepping up to the plate and blabbering on and on about their scientific findings during specials on The Discovery Channel. If they don't, then the terrorists have already won.

Die By the Sword!!

Zack "Big Gulp Supersizer" Parsons here with an all new SA Story Time! This week we take a look at Samurai Epic By Numbers. Those samurai books are coming back into style after more than a decade and we want to save you time and money by abridging and mocking the entire sub genre!

Both samurai hacked a ninja in half before they touched the ground, but as they did the remaining ninjas jumped up into the air fifty feet and formed a giant ninja with a giant sword. It took a swing at Dari but he managed to roll out of the way just in time. He moved to counterattack when thousands of shurikens came hurtling at him from even more ninjas positioned in the tops of trees. The ninjas were throwing like five hundred ninja stars a second, you couldn't even see them they were just making trees and rocks and birds explode in every direction all around the two samurai.

In my humble opinion this is the best SA Story Time yet, but I tend to think that about every new one so take it for what it's worth. In the mean time, check it out, because it has more ninjas exploding and samurai's bleeding than you can shake a long staff at!