Cemeteries: Fun for all Ages! 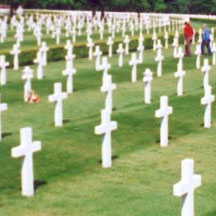 Now this isn't some weird place where they crucify hundreds of tiny messiahs, this is a cemetery!For as long as people have been turning dead, the living have continued to make sure that the dead stay dead. In ancient times, man lacked a reliable means of fighting the undead. The methods we humans once used to keep the undead at bay were as laughable as an old lady falling into a vat of carbolic acid. Primitive man would pile large amounts of dirt on the recently deceased thinking dirt would keep the dead surrounded. The problem is, some undead would have enough strength to dig out and terrorize the living. Then man got the bright idea to place a large and heavy stone atop the dirt. Most undead lacked the strength to dig back to the surface, let alone move a big heavy stone. Still, some were able to break free. Worse yet, the highly valuable stones would occasionally be stolen and used to build castles or numerous smaller stones. As time went on, industrious zombie killers came up with the idea of putting the dead inside a heavy-duty corpse box, or coffin. This extra measure of security was a crippling blow to the evil intentions of the dead. I think this is also the reason why we refer to old stuff as being B.C., or Before Coffins. Coffins became all the rage, and the undead problem decayed just like a rotting corpse, which is pretty much what the undead were in the first place. Basically, everything worked out for the better!

Unfortunately as people continued to succumb to that bootylicious enchantress we call Death, the amount of occupied coffins lying around became problematic. That was until one brave soul stood up and shouted, "Lets bury them like we used to!" while swinging his arm in an excited fashion. I don't remember who it was that said that, but I'm sure they had several ancient high schools named in their honor. Also, right after that was said everybody in the area got up and started singing. After twenty minutes of song and dance everyone sobered up and jumped onto the warm lap of action. Everywhere people were burying coffins, and as tradition dictated, they placed a large stone atop the burial site. Before long, areas were designated solely for the purposes of burying corpse boxes. These areas were known as cemeteries. You've probably heard of cemeteries as being haunted and scary. This is true of some cemeteries, but not all. It just so happens that many cemeteries were built right smack on top of ancient Native American burial grounds. If dead Indians hate one thing, it's people walking all over them. Even if it is other dead people. 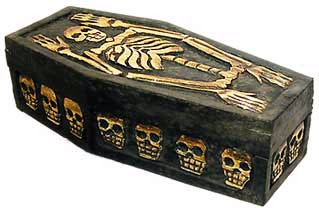 This traditional coffin may one day house your best friend or most hated enemy!To this day cemeteries remain the premiere spot for burying corpse boxes and the dead bodies contained within. All around the world you'll find cemeteries of all shapes and sizes, even cemeteries dedicated to animals! But what you won't find inside a cemetery is fun. For some reason people have no desire to visit a cemetery other than to stand over the buried remains of a friend or relative who has been defeated by life. This creates a problem bigger than a totem poll made out of gigantic bats! Cemeteries all over the world are being neglected as sources of entertainment. As a certified defender of fun and unregistered sex offender, I'm here to put a stop to that! Cemeteries have provided me much mirth, and they can do the same for you!

For starters, lets take a look at what a cemetery is. A good cemetery is an essence a large grassy field with few trees. It just so happens that many sporting events are played in large grassy fields with few trees. Golf, football, baseball, you name it. About the only thing you can't play in a cemetery is ice hockey, but only queers and Canadians play that. Anyway, getting back to the sports. Pretty much every sport can be played sufficiently in a cemetery. You will encounter problems trying to play a game like football with tombstones all over the place, though. I recommend getting a bunch of friends together and moving as many tombstones as you can. No one is going to complain if you clear out an area the size of a football field. Don't worry about the dead rising, because the coffins and six feet of dirt do a good job keeping the dead secure. Like the corpses beneath them, those stones are just dead weight.

Another fun game that's popular with the youth is paintball. Cemeteries just happen to be the perfect place to play paintball. Think about it, you've got a large area just ripe for shootouts. To make it more challenging, those tombstones and trees create ideal cover. It's just like that "American Gladiators" game where you had to hide behind little tiny boxes while a muscular man in spandex named Turbo shot balls at you. You can run around firing your gun and then duck behind a protective slab of stone! Plus, you don't have to pay high prices to play at a paintball facility. The admission price for all cemeteries is zero dollars and zero cents!

If you aren't the sporting type, you can always just have a good old-fashioned family picnic. The lush landscapes and pleasant outdoor surroundings mean you'll be at one with nature while you enjoy a delicious meal. Large tombstones and obelisks also create shade in case the day is hot and the sun is shining bright! Yes, the calm and peace of a graveyard can't be beat. This is because cemeteries, like libraries, discourage noise. In fact, cemeteries are basically libraries. It's just that instead of books they house human corpses. Of course who knows what kind of ghastly things your local library is carrying.

Unfortunately, cemeteries do have the occasional problem. For example, a marauding Goth horde may have taken claim to your local cemetery. If this is the case, recruit a diverse group of citizens from your community and challenge them to an athletic competition. Goths can't handle competition or diversity, and so they will quickly retreat into their studio apartments when they realize the veracity of your challenge. After that, the cemetery is yours! Of course another problem is that an overbearing groundskeeper may be worried about you disturbing the dead. In that case, it's best to visit the cemetery when he or she isn't around. People in the funeral and cemetery business tend to have strange ties to the netherworld, the kind of ties that lead to your death and then them handling your death! Double whammy!

Of course I'm a liar, so I could be lying. But then again, I could be lying about being a liar. The only way to derive truth from this monster of a mystery is to go find out for yourself! No I don't mean give me a lie detector test, because I'm a confident liar. And I'm not lying about that. I mean go to a cemetery. If it isn't Party Central then you probably got confused and drove to a trailer park or something. Take the family, invite the friends, bring the pets, and be prepared to have a good time over a lot of people's dead bodies!