In the realm of wacky religious groups, the "Raelians" are second only to the manifest evil and baby-eating of the Scientologemologists. Who are the Raelians you ask? They are these kooky folks who believe humanity was created by aliens genetically manipulating life and have founded a group called "Clonaid" in the hopes of cloning a human being. I assume this will somehow prove their "highly plausible" theory that aliens genetically engineered people from dirt or birds or something. Regardless of their crackpot human origin theories, I have to give their overall idea a lot of credit; there is a lot to be said about human cloning. For example:

There are a lot of possibilities for cloning but they are nothing when you think about the possibilities of cloning combined with the formative science of human genetic engineering. We have examined some of the wonderful options in a world where cloning is legal, now let's take the next step in this utopian future and picture some of the potential applications for genetic engineering in the cloning process. 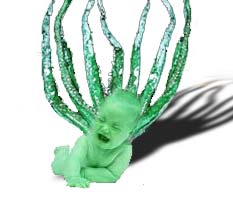 Every baby wishes it could have tentacles. Just look how happy he is!

With the combined forces of cloning and genetics, the human race is one step away from godhood. Either that or we'll create an army of half-human / half-donkeys that we'll call "humkeys" and will be stubborn and swear a lot and chew tobacco. Good night folks, the painkillers are starting to wear off!