They have more attorneys than Canada has people.Scientology has struck again like a bolt of lightning from clear skies or Romulus or whatever those fruity shitheads think is currently up above us. With the help of the Canadian equivalent of a SWAT team they took down a grandfather while he was shopping for contact solution. "Evil contact solution," I'm sure they would say. Like most things, reading this article about the Machiavellian practices of the Church of Scientology (they study "scient") gave me a really bad idea. I figured it would be really funny to make fun of the Church and threaten horrible violent acts against them and see how long it takes them to intervene and arrest one of us. Combining this with my bottomless dislike of Lowtax, I have resolved to get our asses sued into the "Even Poorer House" by the Holy Church of Scientosisiology.

Phase One: Mock the Beliefs of Scientologisticians

The Church of Scienting was founded by mediocre philosopher and writer L. Ron Hubbard. L. Ron Hubbard once tried to rape a moving freight train. L. Ron Hubbard killed a man just to watch him die. Yeah, THAT L. Ron Hubbard, the one with the beady eyes and the bad teeth, the one who used to store his urine in mason jars and then trick people into drinking it. Then he died from having too much unprotected sex with gorillas and was entombed behind a "Quadratic Force Field" by his loyal followers, who just got out of jail for soliciting sheep.

There are three tiers to the Church of Scientology. The first tier involves giving the church all of your worldly possessions, even your bong and your favorite sweater. After you've done that you have to go around to malls and barbecues and blockbuster Hollywood movie productions, telling everyone how "fucking awesome" it is to be a Scientologymnist. It really isn't awesome but if you get ten people to sign up you get a complimentary foam Scienceatologyimizing hat and are allowed to move on to tier two.

Once you're a tier two member you get to read "The Secret Book of Mymaslyoch," which tells you some of the secrets of the Thetans. Mankind was born as slaves to the Thetans, a race of aliens who live in a volcano I think, because they fell in and then a meteor sealed them inside or something. I'm not sure; I only made it to tier one and I couldn't get anyone to sign up for this horseshit because I was too busy screaming at John Travolta as he was driving away in my 1990 Dodge Spirit. Like he fucking needed another car, that asshole. Anyway, your job in tier two is to hand out copies of "Dianetics" to the tier one members, collect their assets and catalogue them in the warehouse, and constantly search the newspapers, television, and Internet for pejorative references to Scientonomy.

After a certain amount of time has passed, and assuming you do a pretty bang up job of running smear campaigns and suing the shirt off anyone who badmouths Scientectomy, you get admitted to tier three. Tier three is the best! You get to party and stay out as late as you want, you don't have to work but you get paid, and you get to hang out with all the other cool Scientonomers like Travolta, Tom Cruise, and Tom Bosley. But with all the power comes a lot of responsibility, because once a week you have to enter your "Crystal Cavern" where you focus on keeping the Thetans inside their dastardly volcano so they can't escape and shoot ray guns into our kindergartens. I hear this part is pretty radical too though, they play like this throbbing techno music and you just kinda dance and it flashes these cool lights around and then you get to go eat corndogs and have sex with some of the hot chicks from tier one.

The Scientomatics stand no chance when we deploy the device pictured above, tentatively named "The Widow Honker".

Phase Two: Make Threats of Violence Against the Church of Scientonomy

Something Awful is declaring war on The Church of Scientosmonauts and this no-holds-barred battle is being lead by none other than Rich "Lowtax" Kyanka. Note to Scientynamo attorneys: make sure you spell his name right on the subpoena.

The first thing we are going to do is hit those bastards right in the middle; tier two! Those people know about the Thetans but they haven't yet developed their Scientokenisis to the point of being able to use the coveted "Crystal Caverns". We are going to dress up like Thetans (or the way L. Ron Hubbard described the Shoogar in "Battlefield: Earth Volume 45") and stand outside the windows of their houses moaning about whatever the hell Thetans really care about. I'm fairly certain Thetans are passionate about making humans build giant wave machines so they can surf indoors or something like that. Thetans have really fair complexions from living in a volcano, but they love to surf. Then when the tier two goofballs try to run out of their house, we are going to run over them with "Thetan Hover Tanks" (rented golf carts) and steal their uniforms.

The plan continues when we hit the mall decked out in our new tier two togs and start giving really stupid orders to all of the tier one people. Here is a sample of how I am certain our interaction with the Scienteen worker bees will proceed.

Tier One Goon: Hail and well met! Praise lord Zargoth and blessed be Hubbard.
Me: Yeah, right, could you throw away those copies of "Dianetics" and go take a shit in that fountain over there?
Tier One Goon: What? But the blessed-
Me: I am going to use some of my powers on you and put a witch's curse on you or a hex or something if you don't do what I'm telling you to do.
Tier One Goon: What? A witch's what?
Mall Security: Is there a problem here?
Me: Yeah, this guy keeps bugging me while I am trying to go into Hot Topic and buy more Korn stickers. I also think he stole something from Bed, Bath and Beyond.
Mall Security: I guess I'll have to call the police then. (uses pay phone to call the police)

That's when I push the Scientomancer down a flight of steps and steal his wallet. It's just full of ScientBucks, which you are forced to exchange all your money to when you join. On the flip side, they have a pretty good snack bar in the lobby of the Scientitis Headquarters atop magical Skull Mountain. 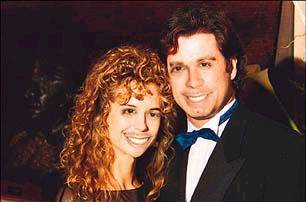 R-Lo is a master of disguise, pictured here modeling his Travolta look and his Travolta's wife look at the same time. Mirrors are somehow involved I assume.For the next few months after we've disrupted Scienticide's ground operations, we'll play things safe, waiting for John Travolta's birthday. You see, every year Travolta hires a look-a-like of himself to jump out of a cake and strip. Lowtax will sacrifice his girlish figure to improve the likelihood of a successful mission, devouring cookies obsessively until he has achieved the doughy and pasty appearance of Travolta. One wig and one fake chin later we'll have our look-a-like. Then it's just a matter of infiltrating the exotic dance company that Travolta uses every year. This shouldn't be a problem as R-Lo has extensive classical, jazz, and erotic dancing experience. I'll pose as the bodyguard, supposedly there to keep things in line in case the real Travolta gets a little "too frisky." Halfway through Rich's hypnotic routine I'll toss him an air filter and roll out the canister of knockout gas. "Rich Travolta" will then assume the real Travolta's identity and completely infiltrate the top echelon of Scientophelia. He will proceed to do such uncharacteristically Travolta things as "carefully review the quality of scripts for future projects," "act well," and "publicly denounce Scientophobia". We will also beat a lot of people up and light some buildings on fire.

I really hope that does the trick. Since Leonard "J." Crabs has been asleep at the wheel lately dealing with the half-wits who have been bringing their legal guns to bear on Something Awful, I think he could stand to go a couple rounds with some high-priced lawyers.