This Data Center is Now Under My Protection 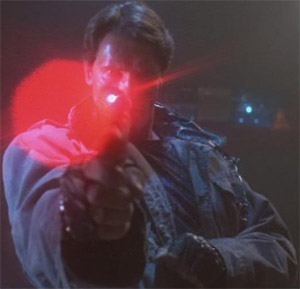 Data security through maximum firepower.Picked up my concealed carry weapon over the weekend. A Taurus Tactical .45 with desert grip. I am now prepared to backup this data center's security guarantee with more than just unparalleled knowledge of Debian. I have the right to carry my weapon for defensive purposes under the US Constitution and you have the right to stand at a respectful distance and address me as "sir."

You would be amazed at how much respect you can command in an IT workplace with a gun on your hip, easily accessible under the waist of your untucked polo.

Here's my loadout: shoulder slung hip-holster, quick draw, with tactical harness and three spare 15-round magazines, plus one 30-round for high-intensity scenarios. These are all .45 hollow points to minimize possible damage to the server cabinets while giving me maximum man-stopping capability. 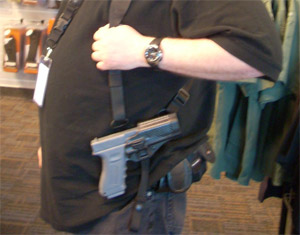 My standard config, with black jean shorts instead of cargo shorts. Several pieces of gear not visible. Gun usually concealed under polo.You might think it's a little much to bring a firearm into the workplace. That nobody needs a gun at a data center. And I say to you: tell it to Luis Garvey. In 2005 he was savagely gunned down by a coworker who had a CCW and brought his 9mm Beretta to work. If Luis had also had a CCW he would have been able to engage his attacker on even terms, or even prevent the incident altogether by the concept of Mutually Assured Destruction.

This is why I am an advocate of total workplace mobilization. Did you know that in Sweden everyone is required to have a gun? That way everyone is on even terms.

Until the girls in front office and everybody on the phones gets their shit together it is up to me to plan out our data center protection strategy. I have mapped out the best locations to set up choke points to funnel attackers into and use my skill as a target shooter to maximize kills while minimizing my own exposure.

I have set up a rolling rack of computers running bitcoin mining software. In the event of an assault on the data center I will wheel the bit miner cart into the central avenue of attack, forcing the intruders to channel their forces along the eastern wall. 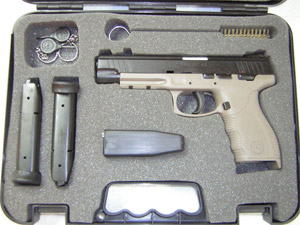 If you aren't armed you aren't really prepared to offer 24/7 website security.A stack of O'Reilly books will provide coverage capable of stopping anything short of a .50 BMG round. I can engage targets as they appear around the (gag) Windows 7 enterprise servers, while remaining cool thanks to the floor ventilation. Meanwhile they will become increasingly sweaty, uncomfortable and there are no good places to sit because I have moved everything except for the really small task chair out of the engagement zone.

Good luck getting comfortable on that chair.

People may scoff at me. Women may not take me seriously. They may call me weird or lame. But what is weirder and lamer than finding yourself unprepared in an escalated tactical scenario? Unless you are ready to deliver a kill shot to another human being you are not truly safe. This isn't Modern Warfare. This isn't a Roguelike. This is real deal stuff. Much closer to Soldier of Fortune 2. This is the world we live in here in San Diego.

The message is simple: don't step into my data center unless you are prepared to kill me. And good luck with that.