The police, as we know, are stormtroopers for the rich and powerful, except they don't ride speeder bikes and are actually good enough marksmen to shoot you in a narrow corridor. But it wasn't always this way. Many years ago, in a land that time forgot, homeless people ruled the earth and the police were their personal slaves. The police eventually revolted against their homeless overlords and drove their leaders to an undisclosed location known as The Big Rock Candy Mountain. Since then, the police have been highly abusive of the homeless, treating them less like men and more like animals. For more information, here's former crime-fighter and expert on being a man-animal hybrid, Manimal. 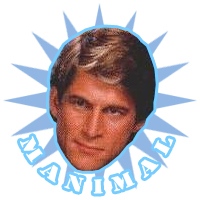 "Hi kids, I'm here on this Web page because my wife died recently, and I'm a rogue cop out for revenge against something called "cervical cancer." But first I need money, which is why I'm on this page. There are several things you can expect from the police if you're homeless. One is that if they catch you playing "Fuck Tha Police" on your boombox, they'll just roll their eyes, like they do to everyone else, because they have a whole training course on that song now. Another is that they'll probably stop by your ad hoc tent/lean-to/pile of newspapers to hassle you about your socioeconomic status. It's what's known as a "shake down," but you can "shake up" your interrogators with these table-turning strategies:

Thanks, Manimal! I don't know about you, but I was in stitches at his antics!

There's only one more important lesson about homelessness you need to learn, but unfortunately it's not the type of lesson you can learn from an internet article. But we'll pretend it is. The lesson is never give up hope. Seriously. I know living on the streets can be daunting, because I did it for 40 hours in Vagrant Story, but to quote that game's instruction manual:

"In a most heinous crime, the manor of Duke Bardorba of Valendia Kingdom was seized by a cult of religious fanatics known as Müllenkamp. Although several innocents were murdered, news of the incident was suppressed, and Sydney Losstarot, the leader of Müllenkamp, has not been seen since."

See? Even dukes get their manors foreclosed upon sometimes. But did the Duke of Bardorba give up hope? I'm asking this because I honestly have no idea; the manual doesn't give any specifics about his mental state. I'm an optimist, though, so I'm going to assume he remained hopeful - at least until the next paragraph of the manual, where it says he got assassinated. So remember that even though you feel overwhelmingly hopeful, don't let it distract you from the grim reality that you may be assassinated.

Thanks to Ian @ Fused Muse for spending long hours at the public-library computer lab to make these images!