Previously on How to Improve Your Worldwide Conspiracy:


Hi, the Author here. In the first installment of my work, you were introduced to several companies battling each other in a crowded global conspiracy market. Working for one of these companies are two men: Carlyle, a mid-level manager with greater ambitions and Things Up His Sleeve, and Junior Junior Agent Brad, who has found himself faced with a gun-wielding, spud-stealing rival junior agent after receiving a mysterious call telling him to go to Las Vegas. And now, I, the Author, welcome you to my world...

When: Not very long ago
Where: A produce stand outside of King City, California. 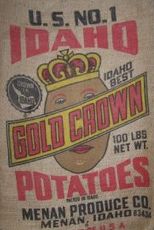 The man pulled the trigger, and Brad couldn't help but laugh. International conspiracies generally don't stay top secret by handing live weapons to their most junior members. Only those who can be trusted to never use a gun under any circumstances are then allowed to carry fully loaded weapons which remain parked at their owner's waist forever.

Pulling a trigger on a gun made out of rubber rarely has any sort of negative effect for anyone but the idiot doing the pulling. Agent Potato winced in embarrassment, realizing a moment too late how stupid his reflexive act of defense had made him look. Then he winced again because Brad's foot was making a good first impression in his stomach.

"aauUGGHuh," he said, with feeling, and collapsed into the dirt. The guy running the produce stand watched with interest but without concern.

Author's note: Maybe I should give the produce guy a name? No, no. People like mysteries, I guess. They do like mysteries right? I dunno. I'm tired of thinking about this.

"I put my foot right there. Right in your stomach," said Brad.

"You need to work on your one-liners," said the produce guy. "You want his potatoes?" He pointed to a huge garbage bag of spuds.

"Don't really like potatoes. Can I take a peach?"

He snapped the car door open dramatically and it banged into the car next to him. The produce guy stared impassively as Brad inspected the other car, pretended to not see any dents, and got into his car. Hands on the wheel, hands off the wheel, hands into leather gloves because those look cooler, hands back on the wheel. Rubber gun at his side. Shades on his face. Off to Las Vegas.

Author's note: No wait, he mused that.

When: A little before the present.
Where: Headquarters of Worldwide Conspiracy Inc.

"Mr. Carlyle, the president. Says it's a matter of national importance again."

"Why do they always pawn off the boring work on smart guys like me?" he said. "Well, have him wait a few minutes. It won't kill him."

The Acting Manager of Thought Acquisition for Worldwide Conspiracy Inc. hauled his feet onto the desk, threw his bulk back into the chair, and unfurled the newspaper over his head like a sail. He examined the day's headlines with the pride of a job well done.

"What's that sir?" said his assistant, who had just then been casually browsing job listings with other global conspiracy companies on Monster.com.

Five hundred miles away, the president was sitting at his desk, listening to hold muzak and nodding off into his folded arms. Somewhere across the country, a junior agent was being thrown into a whirlwind adventure of epic proportions that was just getting started and promised many exciting future installments. In that room, much to his surprise, the man in charge of thought acquisition had acquired a thought.

Author's note: I think this is probably a good time to start a new page. Most of you are probably hooked wondering what the thought he had was. It's an interesting thought too, so if you weren't hooked, go to the next page anyway. You got something better to do right now?