The Creation of a Video Game Mascot

Scott, fuck you! Fuck you, Scott! I don't give a damn! Are you going to shut up now? Good. Now that Scott has shut his trap, I can read the rest of the entries, but there's no damn point as they're just long and characteristically uncreative death threats against me. I mean, look at this one, "a claw hammer?" Jesus, people, if we turn this into a video game, we could have another Faggy Flower on our hands! And even though the death threats were a real snooze-fest, I have to say that you filthy muffbuckets were actually able to impress me for the first time in your sorry lives by somehow filling the entire box with urine before lunchtime! I don't know how you were able to get that much urine in just three hours, but maybe if you applied your urine-finding skills to the field of video games, our next title could sell better than the rest of the piss-boxes we've been putting on the shelves this year. Listen people, I didn't squat in this abandoned salt storage dome and survive three standoffs with federal agents just so you jokers could lose my money and pee in my boxes. Now, to provide a little insight as to how this industry works, I've acquired this top-secret document which will give us the most sordid secrets of the video game industry. 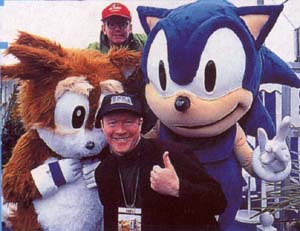 I WILL SINK YOUR SHIP OF FOOLSScott, I will jump down your throat and live in your kidneys! Do you want this to happen?! Really, I don't think you'll want to have a problem pissing, because it seems like you sure enjoy pissing in my prized boxes! Now, can anyone tell me who the piece of human waste adorning the cover of this top secret report is? BZZZT! Time's up, morons! His name is Mario, and this pizza-throwing greaseball has been outselling our games by such a large margin that I can't even figure out how to determine such a large number on my calculator watch! I can tell by the looks on all of your faces that you're shocked that I would take for myself the very gift I promised to the employee of the year. Well, in my opinion, none of you deserve watches, or even wrists for the anguish you put me through on a minute-by-minute basis!

As we know from the CourtTV special I make all of you watch weekly for inspiration, my grandfather spent twenty years of his short twenty-two year life murdering Italian immigrants in their sleep, and I'll be damned if I'm going to betray his legacy by letting this meatball-rolling chunk of garbage ride green dinosaurs all over our profits. Kids have no problem with foreigners these days, even if they are taking away all of the plumbing and pizza box model jobs. For example, take a look at the other character kids want to get their grimy little hands on. Maybe Scott, A.K.A. "Mr. I Know Everything Because I Made It Through Middle School," can tell us who this is.

Scott, I will suplex you right here, in front of all these people! Do you want that?! Do you know I have videotapes of you going to the bathroom? Surely you don't want all of these nice people to see that! Now, moving on, this little blue fuck is Sonic the Hedgehog, and just like Mario, he's a foreigner. Don't look at me like that! I mean, honestly, how many of you have seen one of these crazy blue rats running around in America? None of you have! And if you think you have, you're probably on one of those designer homosexual drugs, just like my step-son! This is what it all boils down to, folks. Games made by foreigners, starring foreigners, this is what people want! I don't want to see hamburger one in this new game. The game plan is this: you chumbuckets come up with the foreignest character those little treasonous shit-children have ever seen, and let's try to make it within the next twenty minutes, because I had a light breakfast. Now let's think... What's as far from American as we can get? Canadian... No. Mexican... a spicy possibility.