Russell Gran was walking home from the bar when it happened. He hadn't quite gotten shitfaced at Wing-Ding's, but he'd thrown back enough that his friends had guilt-tripped him into not driving. Fuckers. Now here he was, footin' it like a dick, taking a short cut across Tarnhill field. He was just thinking about how the stupid muddy ground gave the impression that he was walking upon a giant, moist turd when he saw the lights ...

The spacecraft was about the size of a large house, with the shape of a fancy bar of soap. It settled on the turd-like ground directly in front of Russell. Holy shit, this was really happening! Within moments a large door on the craft slowly started to open, releasing glowing light.

The door finished opening, and a half-dozen aliens emerged. Or were they aliens? They looked human! In fact, they all looked like the same human. Male, blond-grey hair, maybe around 50 years old, and tall, 6'3" or 6'4", with a face that gave Russell kind of a creepy, dirty-cop vibe. He shuddered involuntarily, then he blinked expectantly. 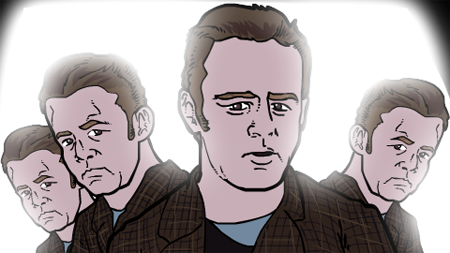 One of the identical aliens stepped forward and spoke. "Greetings, human. We come from far beyond your world to bring you friendship and gifts of wisdom."

"Oh wow," Russell said with nervous excitement. "Uh, hi, my name is Russ. Welcome to my planet, I guess. It's called Earth."

"Hello, Russ," the alien said warmly. "We know what you call your planet. We know much about your world from intercepting Earth's cable TV and Netflix Instant Watch transmissions. That is why we have chosen this form." He gestured to his group's identical appearances. "We know David Morse is what will comfort you."

Russell didn't want to let on that he was drunk, but the aliens were starting to confuse him. David Morse? "The guy who invented Morse code?"

Russell squinted, not sure what he was supposed to be seeing.

"David Morse! The actor!" Alien said testily. He paused, waiting for Russell to perform some grand apologetic gesture to assure them his apparent ignorance was quite temporary and inexplicable. But Russell didn't say "ohhhh, David Morse" while slapping his forehead in theatrical penance. He didn't do or say anything, really.