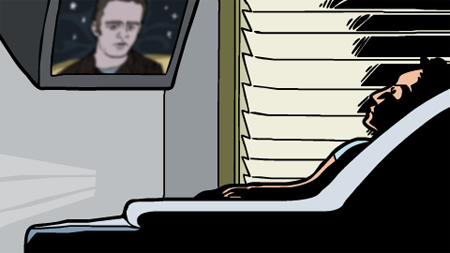 "I never saw any of those... I'm sorry, I'm really confused. Why are we talking about this guy?"

"We wanted to see how your people envisioned their first encounter with aliens, so we studied your film Contact."

"Are you kidding me?! It was a box office hit! Have you seen any movies?"

"Yes! But everything you're naming is from the '90s! Sorry that I was in elementary school when Contact came out. Plus I've never really been into Star Trek -"

"Oh for the love of..." The alien started massaging its forehead. "You're thinking of Star Trek: First Contact. Contact has Jodie Foster and Matthew McConaughey. Jodie Foster is a scientist who goes into space and meets an alien, and the alien makes itself look like her dead father - David Morse! - to make her feel comfortable! So we made ourselves look like David Morse! To make you comfortable!"

"How should we know?! It seemed strange to us, but we don't understand everything about human culture. You tell us, you're the human."

"No, I think that's just illogical. Even if it wasn't, shouldn't you have made yourself look like my dead father instead of whatshisface, the '90s actor from movies I've barely heard of?"

"Well, for one, we didn't know we were going to be meeting you specifically, Russ, now did we? And two, David Morse has had a very illustrious career, in and out of the '90s. He played George Washington in a little HBO mini-series, you may have heard of it - John fucking Adams! Winner of multiple of your Emmys and Golden Globes!"

Russell hadn't see that either. His roommate had rented the DVDs, but Russell thought it looked dull. He hesitated to mention this, but the alien could tell.

"Argh! I can't believe you! I really can't! You know how much work it was making ourselves look like David Morse?!"

"How is that my fault? Why didn't you make yourselves look like a character from a movie with a more lasting appeal, like E.T. or I don't know, Chewbacca, or something? And why do all of you look like David Morse? That's extra weird."

The spacecraft suddenly bathed Russell in a soft blue light.

"We just gave you cancer."

And with that, the aliens all turned and started filing back into the spacecraft. The main alien turned back to Russell as the craft's door started closing. "Hey Russ... suck a dick!"

Russell faintly heard what he believed to be the aliens cursing in their own language as the spacecraft's door closed. Then, in a flash, the craft shot up into the night sky and was gone.

Russell was dazed. It all happened so fast. He trudged once more across the turd field to his apartment, where he made a frozen pizza and passed out on his couch while watching Adult Swim. When he woke in the morning, he assumed it had all been a drunken nightmare. Until several months later...

When his doctor informed him he had advanced testicular cancer.

While he was in his hospital bed, Contact played on Starz.