Whenever I go out to eat, I always comb through the menu for specific words: shark, snake, grizzly, etc. It's not that I don't like more standard dishes. I love a good steak as much as the next guy, but that sort of thing just doesn't excite me anymore. I hunger for danger foods. By my definition, a danger food is any animal that can take me in a fair fight. The way I see it, if it could have killed me when it was alive, I get to eat it once it's dead. In fact, it's my civic duty to do so. For example, a shark could rip me apart with its rows of razor sharp teeth. Thus, I get to turn it into poop. The circle of life continues. On the other hand, a cow, while large enough to do some serious damage if it fell on me, is a stupidly docile animal. I could walk up to a cow and starting eating it right then and there, and it still wouldn't put up a fight until it was nothing but udder and hooves. Chicken? For all the flapping and noise, the chicken is nonetheless a nonthreatening creature. I could win that fight. Pork? Pigs can eat a lot in a short amount of time, but they'll look right down the barrel of a gun and expect a candy treat. No real challenge, there. 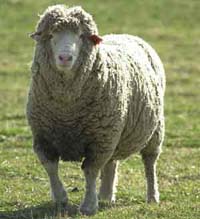 Ewe think you're so tough.

Salmon? Despite having the strength to swim upstream, any creature that would willingly chomp down on a metal hook is one that I could take in the squared circle. Veal? Please. I could easily punch a veal calf to death before it could work its way out of its little crate. As for lamb, I've got a winning strategy there. I'd just dress up as a member of the Taliban and, fearing for the safety of its virgin anus, the lamb would run anywhere I chased it, even into my patented killing machine. Ben - 1, lamb - 0. I win. All of these are perfectly viable food options, but there's no real sport. They have no real tools with which to fight back. Crocodiles, bears, gorillas, elephants, tigers - God gave these animals sharp claws, jagged teeth, enormous physical size, and incredible strength with which to defend themselves. Logic dictates that if we can get good food from animals that are easily killable, we can get much better, tastier food from animals that require work. Now you environmentalists might say, "wait, aren't some of those animals endangered?" You're damn right, they are. That's why we have to eat them now, before they disappear! To that end, I am forming a new group, Eating Lethal and Endangered Animals While They're Alive (ELEAWTA). This organization shall be dedicated to sampling all of God's most dangerous, and therefore most delectable creatures. We will not be deterred from our goal, even if the World Wildlife Federation ties us up and beats us unconscious with their complimentary tote bags.

ELEAWTA will not be a group based on frivolity. We will have monthly meetings, all of which will adhere to the following schedule, which I have painstakingly devised:

1. Think of a dangerous and endangered animal.

2. Come up with a way to kill said animal in one-on-one combat.

You know, except for the animals.

3. Go to wherever the animal is found. If possible, travel by helicopter. They're neat.

4. Kill animal before it goes extinct.

Naturally, this will be a very time consuming process. Helicopter rentals alone can take, like, twenty minutes. Luckily, ELEAWTA has a visionary at its helm, and I'm more than willing to kick him in the shins until he tells me his ideas. I've already been able to compile a list of our first objectives. Is the list as follows? You'd better believe it is!

Great White Shark - If we've learned anything from Betty Crocker's Shark Bites fruit snacks, it's that the great white is the rarest and most delicious of all sharks. They are most often found trying to eat Richard Dreyfuss. It's clear that he can do more for our cause as bait than a hundred Mr. Holland's whatevers. Thank you, Richard, old chum.

Dingo - These furry bastards have been stealing our babies since the dawn of time, as if to say, "Hey! Eat us! We're full of baby!"

Tiger - Any member of the big cat family will do, actually. Lions, tigers - ooh! How about those white tigers? Their poulation is controlled by the dark magic of Seigfried and Roy. We will free them, then eat them.

Elephant - Poaching them for their ivory tusks is illegal, but fighting them mano e elephanto and then eating them is an afternoon! And afterwards, what the hell, pick your teeth with the tusks. Who's going to complain? Not the elephant!

Crocodile - Hunted by pirates for generations for eating the hand of Captain James Hook, these magnificent beasts are on their way out. Particularly aggressive crocs may be mothers protecting their clutch of sweet, sweet babies. It's like eating an entire cake, then finding a few tiny, thrashing, defenseless slices left in the fridge.

Panda - You might think I'm going to use that joke from The Simpsons, "They're finger Ling-Ling good." You'd be absolutely right. The Simpsons cracks me up.

Maori Tribesmen - All that spear throwing and dart blowing means they have lots of quick muscle fiber. In other words, lots of white meat. Mmm-mmm, that's good tribesman!

Wookie - With the strength to rip a man's arms off and a good working knowledge of the most advanced spacecraft, the wookie is a formidable foe. Once you get past the fur, though, that's nine feet, six hundred pounds of good eating!

Surprisingly enough, despite the overwhelming evidence that we are right and they are wrong (and also stupid), there are those who would rather not see ELEAWTA succeed in its goals. The main opposition to ELEAWTA will come from animal rights acitivists, vegetarians, and dirty, smelly hippies. I'd like to use this forum to address these groups in another indented paragraph that takes up a lot of room on the page and makes it look like I'm a prolific writer. 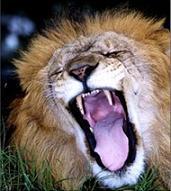 To Whom It May Concern,

I have heard your arguments against the actions of my organization - it's inhumane, it's inherently evil, wookies are extinct - and I can only think of one thing to say in reply. Go hug a hugging tree, you tree-hugging tree-huggers. When dingos are stealing your hemped-up, longhaired lovebabies, you'll beg for someone to come and beat those four-legged fiends to death, and then serve them in a shallot marinade with a parsley garnish.

Founder, Eating Lethal and Endangered Animals While They're Alive

By now, I should have pissed off the vegetarians, animal lovers, "Star Wars" fans, and Maori Tribesmen among the Something Awful readers. My ingenious plan to weed out the undersirables (and get a huge amount of flame mail) is working beautifully. If you're still reading, you must be one of the rational people interested in joining ELEAWTA. Well, I can probably thin the ranks a little more. Try this: what has two legs and bleeds all over the carpet? Half a cat. Ha! Alright, that should take care of the cat lovers. They'll all get theirs once we put cats on our list. I know, cats aren't endangered.... yet. Anyway, if you're still here, then you're welcome to join the ranks of ELEAWTA. I had to work pretty hard to alienate a large percentage of SA readers without driving the rest of you away. Now that it's all said and done, though, I think that those of you who are left are definitely the best and brightest. I'm glad to have you as members of ELEAWTA, instead of those whiny, thin-skinned flower children. Just remember, being a part of this illustrious group is about the culinary experience of dining upon dangerous and endangered animals. It isn't an excuse to gorge yourself stupid and get fat. Fat people are gross. Am I right, or what? Hey, where'd everybody go?

The Photoshop Olympics - Like the Real Olympics, but for Nerds

I, for one, have the Photoshop skills of a blind, illiterate pygmy child with no arms and a nasty case of ebola. Thankfully, there are others out there who can make Photoshop dance for them like an expensive whore (which is a nice treat for them, since none of them can afford an expensive whore). These individuals are called "dweebs," and today, their nerdly exploits come fresh from the Something Awful Forums to your screen. Marvel, if you will (and you'd better), at the first round of competition from The SA Goon Photoshop Olympics. 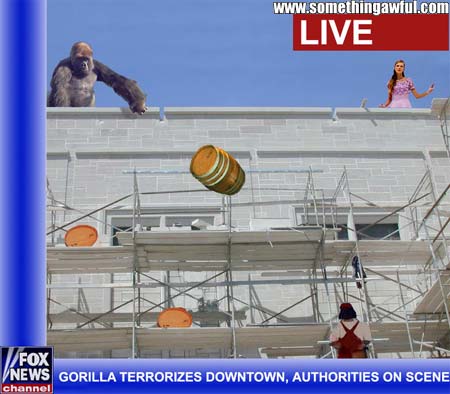 Go take a look! If you don't Lowtax will beat me with his collection of antique sporks.